They Promised To Pay Staff Through November 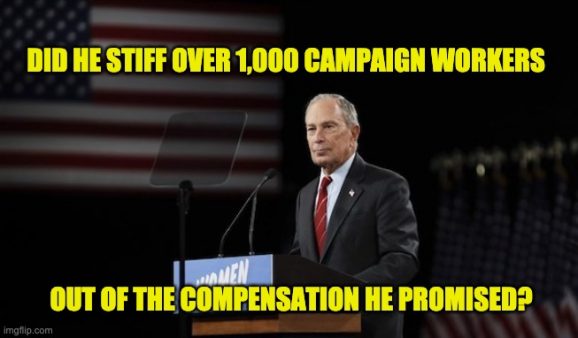 Mike Bloomberg’s campaign supposedly guaranteed they would keep paying 1,000 campaign workers through November, but those workers were all fired last week. The Bloomberg campaign now faces a class-action lawsuit.

“Michael Bloomberg’s massive campaign apparatus and an army of some 500 staffers will march on through the general election in November even if he loses the Democratic nomination, campaign officials tell NBC News, shifting their efforts toward working to elect whomever the party selects to face President Donald Trump. Bloomberg’s vast tech operation will also be redirected to help the eventual nominee, as Democrats struggle to compete with the vaunted digital operation built by Trump campaign manager Brad Parscale. Hawkfish, a digital company started by Bloomberg that’s carrying out his $100 million online ad campaign, will be retained through Election Day to help defeat Trump, the officials said.”

As the saying says, Hell hat no fury… One of the former field organizers for the campaign  “sued on behalf of herself and other former staffers, claiming the candidate promised more than 1,000 staffers jobs through November before laying them off last week.

In the lawsuit filed in federal court Monday (and embedded below) Donna Wood argued the former New York City mayor deprived field organizers “of promised income and health care benefits, leaving them and their families potentially uninsured in the face of a global pandemic.”

“The Bloomberg campaign had represented to folks they were going to keep people on through November, regardless of his candidacy, which is one of the reasons we think he attracted such talent,” Sally Abrahamson of Outten & Golden LLP, one of the attorneys on the case, told NBC News. “He’s terminating, we believe, over 1,000 people at a time when we believe unemployment is likely going to be 20 or 30 percent, and they’re going to lose their health care.”

An interview script for job applicants seen by NBC and reportedly used by the campaign references “employment through November 2020.”

The suit claims that many Field Organizers and other campaign employees resigned or took leaves of absences from their then-current employment, and many relocated to different cities and/or states to work for the Bloomberg effort. The lawsuit is seeking class-action certification because there are too many harmed people to handle individually. It alleges that Bloomberg was able to hire good people because of their promise of paying them through November, whether he stayed in the race or not. The workers are suing for breach of that contract as well as unpaid overtime compensation.

If the Bloomberg campaign did, in fact, make that promise, it is more proof the man should never be President.  He wasted $1 Billion on a campaign he had no chance of winning, but won’t spend a much smaller sum to keep a promise to the “little people” who worked for him.

Read the text of the filed lawsuit below: