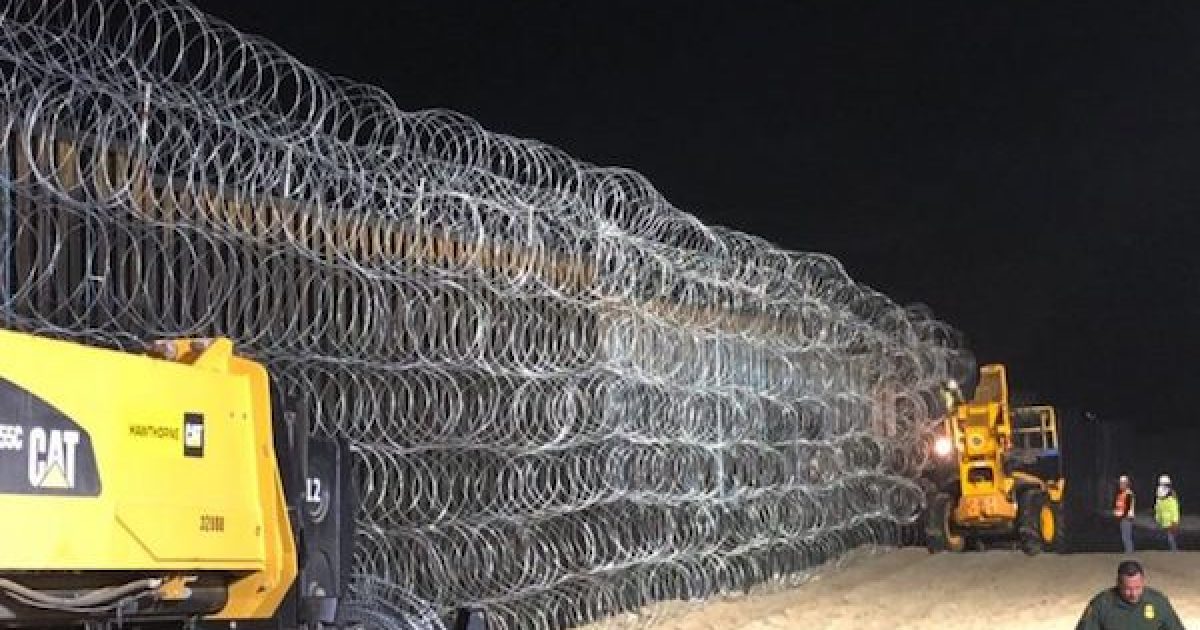 There is no predicting how this will go in the days ahead.  But with as many as 10,000 people reportedly making their way now from Central America, the outlines of the situation, and its tensions are likely to sharpen in critical ways, if they blur in others.

Whatever the organizers of the migrant caravans thought would happen, it probably isn’t going to.  The organizers are not in the driver’s seat now.

From the beginning, information about the caravans has indicated that they are organized by radical open-borders activists with ties to socialist political bosses in Central America, and probably funding from “philanthropists” like George Soros.  Support from meddling antagonists of the U.S. like Russia and Iran is not out of the question.

None of that means that there aren’t people in the caravans who merely want to get to the United States to find jobs or enjoy public benefits.  It does mean that the caravans would not be organized as they are, and when they are, without the outside patronage and political impetus.

When the first caravan set out, the organizers had some key advantages.  One was that the U.S. border was poorly fortified against concerted and determined efforts to cross it illegally.  If thousands of migrants could get to the border and stage demonstration crossings, or even attempts at crossing – with media coverage, at a time chosen by organizers – the effect would be politically incendiary.

It could even be transformative, making the U.S. indefensible against a massive influx, if it were successful under the right conditions.  The U.S. being caught flatfooted, paralyzed by surprise and indecision, would be essential.  (I doubt that this was a plan made with relentless determination by the organizers.  But it was very probably a plan envisioned for execution if opportune – if conditions supported it.  The example of Europe being caught flatfooted over the last several years would be cause for optimism, given that the U.S. border is every bit as poorly defended as the borders of Southern Europe.)

Another advantage was that Mexico was relatively quiescent.  These caravans have been coming – if seldom, and in much smaller numbers – for a decade.  Mexico generally ushers them through and lets them be Uncle Sam’s problem.  Throughout the caravans’ history, the numbers that puddle up at the U.S. border haven’t triggered much of a response from American authorities.

And a third significant advantage had the U.S. media on the organizers’ side, ready to mock security concerns about the caravans and accuse “racists” in America of misrepresenting them.  The mainstream media could get away with that during the caravan transits through Mexico, which are hard for independent media to cover.  The MSM could dismissively reiterate a refrain that the migrants were “hundreds of miles from the border,” and that every worry expressed about them was hysterical and premature, even as the travelers in the lead of the first caravan were covering hundreds of miles a day in buses and on flatbeds.

Since the first migrants arrived in Tijuana last week, however, those advantages have been lost.

The moment has arrived when the migrants have shown up at the border.  It’s here, and so are they.  Their location and activities are much easier for independent media to cover.  Local affiliates of the legacy media, such as the TV stations and newspapers in San Diego, can’t avoid covering them.  The MSM in the U.S. will either ignore them or have to acknowledge where they are and what they’re doing.

Significantly, the MSM can no longer be functionally on the organizers’ side simply by retailing a misleading, blinders-on narrative that few can disprove.  They have to work harder now, and they have to make strategic choices about how they’ll cover things – things that are really happening, and things that other people with cameras and microphones are going to record.

That aspect of the caravans’ progress was always going to happen.  But the important thing this time is that the other two significant advantages have eroded so badly.

Mexico isn’t able to maintain a quiescent posture, as she has in the past.  The lead caravan is too big, and it has deposited too many people in one place.  The organizers probably chose Tijuana partly because it’s across from California, and they have political sympathizers there.  But instead of a couple hundred migrants showing up, who could be processed at the border inside of a month and disappear into the U.S. system, there are several thousand, and more on the way.

Many of the Mexicans in Tijuana are seeing their daily lives disrupted tremendously.  And they don’t like it.  They’re protesting.  “Mexico first! Tijuana first!”  They’re complaining to their mayor, who in turn is complaining to the state and national authorities.

Reporting from the caravan coverage during the transit indicates that this resistance from Mexicans isn’t just peevishness about a few extra people in the public squares.  There are, in fact, hundreds of criminals in the lead caravan, and they’ve been robbing, vandalizing, and terrorizing Mexicans all along the route.  They’re reported to have routinely attacked police, forcing them to operate defensively for self-preservation and to have kidnapped and exploited caravan members.

The caravan didn’t just bring women and children who need feeding. It’s mostly men, to begin with, and most of them are young men, traveling without families to look after.  Even with only a minority of them being criminals, the caravan brought what is probably turning into a crime wave to Tijuana.

Mexican Woman says that instead of invading another country illegally, migrants should stay and fight for change in their own country.

There can be no excuse for posturing sanctimoniously before Mexicans about their treatment of the caravans.  The Mexicans, like many of the migrants, are being used as human props for the radical organizers’ political theater.

Goodwill for the caravans is in short supply in Tijuana.  If follow-on caravans head for other border cities, the same conditions will recur.

Moreover, the first caravan didn’t head for Tijuana solely because of its location next to California.  The caravans are limited regarding where they can safely operate.  There is too much cartel-controlled territory between California and East Texas for the organizers to parade showy political caravans through the area.  Along much of that swath of the border, the cartels decide who gets through and who doesn’t.

If the U.S. is alerted and implementing deterrence measures, that is a decisive limitation on the caravan organizers’ tactical latitude.  They can’t just mass at the border wherever would be most convenient for them.

And – significantly – an unalerted, or at least a passive, United States is the third advantage that evaporated this time.  This time, the U.S. is ready to proactively deter attempts at illegal border crossing.

The tiebreaker for this readiness is the deployment of U.S. troops to the border.  The best, most productive use of those troops was always to function as a deterrent.  Wherever the caravans were headed – which we would know from our own surveillance, and working with Mexico – getting there beforehand and making it too hard to try to cross was the best option.

That’s what was done in the San Diego-Tijuana area, as Trump pointed out on Monday.

The Fake News is showing old footage of people climbing over our Ocean Area Fence. This is what it really looks like – no climbers anymore under our Administration! pic.twitter.com/CD4ltRePML

The MSM are sure to misread his comment on outdated “fake news,” made about the viral video clips of people climbing on the border fence.  Some of the videos are from just a few days ago.  While some of what the MSM is showing may be file footage from the caravan back in the spring, there were, in fact, caravan members who tried climbing on the fence when the latest caravan first arrived last week.

I assume Trump knew that and was focused on highlighting that the fence is no longer scalable because it’s now covered in concertina wire.

The bottom line is that the homely preparation of the concertina wire means it will take fewer Border Patrolmen to secure the fence against jumpers.  The Border Patrol can be more effective over a larger area, and ensure meaningfully better against illegal crossing attempts.  At other locations on the border, preparations with a similar purpose – if by different or complementary methods – can have the same effect.

The media will probably continue to deride the preparations being made by the troops, especially with Trump tweeting pictures of them.

But those preparations are the fulcrum on which the lever of advantage is being shifted.  The caravan organizers don’t have favorable conditions now.  They don’t have quiescence in Mexico; they have a growing political emergency.

They don’t have media sympathy that can be maintained at low cost, and without accountability for the media.  The lead elements of the caravans are too close, visible, and trackable now.

And they don’t have a poorly defended border to exploit.  Not much has really changed on the border.  But what matters is that the caravan organizers’ own limitations for freedom of movement, in light of their real purpose – a political demonstration – mean Trump doesn’t have to defend the whole border.  He just has to make it too hard to cross, in the way the organizers want to cross it, at the limited number of locations available for that kind of crossing.

With the Border Patrol, state law enforcement, and several thousand U.S. troops, that’s an objective that can feasibly be met.  Some migrants may get through.  But if there is no showy, Europe-style onrush to ram home a political message about the indefensible non-sanctity of national borders, the radical organizers come away with nothing.

We don’t know yet if the effort at fortifying the border will be sustained and ultimately successful.  We can hope that it will be.  The open-borders organizers must have their political heads handed to them, for encouraging the people in the caravans to make the long, arduous journey to function as political props, and for inflicting what will be weeks of social disruption, if not months or more, on the citizens of Tijuana.  No one who actually cares what happens to people would organize this.

Trump will have to stand up to ridicule to make sure the border fortification effort doesn’t flag. Although we hear nothing about it, I assume (and certainly hope) that we are working behind the scenes with Mexico and the governments of Central America to help repatriate migrants who are willing.  Statistically, few of the migrants will qualify for asylum (especially if they haven’t accepted it from Mexico).

The angrier and more derisive the media are, the more likely it is that the sharpened political moment sought by the caravan organizers and sponsors is dissipating.  That is what must happen to break their narrative and their momentum.

No one else in this scenario should be, or be seen as, a “loser.”  We want the migrants to have hope and a future, but the narrative that they can only have them if the United States gives up having a national border is nothing but the artificial concoction of radical politics.  For now, the scheme of advantage is shifting against the political climax desired by the caravan organizers. For the migrants’ sake, we should all hope the whole thing dies of paralysis and lack of options as soon as possible.