Migrants Who Rushed U.S. Border Getting Booted Back Home By Mexico 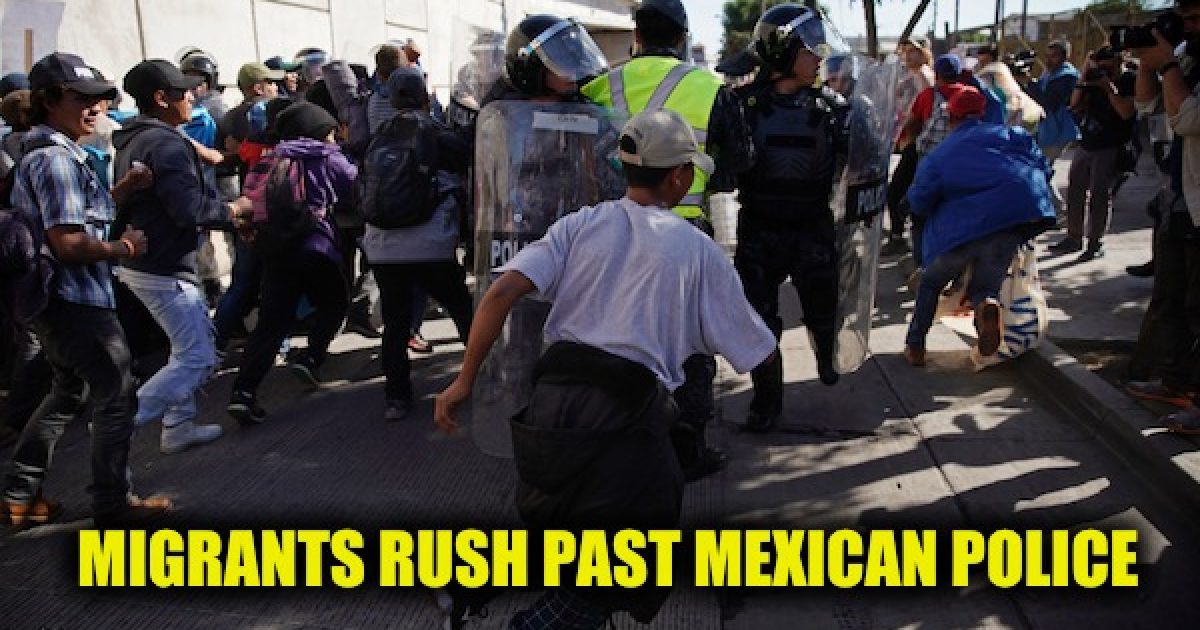 About 500 members of the migrant caravan tried to “violently” breach the border with the U.S. just south of San Diego, California. They have been arrested by Mexico and returned to whence they came. The  500 migrants first tried to get past Mexican federal police on the south side of the port of entry between Tijuana and San Ysidro (a district of San Deigo).

When the Mexican police in riot gear lined up and set up a barrier, but hundreds of the migrants pushed past the blockade of Mexican police and rushed toward the border. One of the Mexican officers trying to keep migrants from the area got into a scuffle and appeared to suffer a cut lip.

A group of several hundred migrants took off toward the concrete banks of the Tijuana River, which they crossed on foot to reach the border fence on the river’s north side.

Rushing the banks of the Tijuana River:

Mexican police closed the bridge so migrants are crossing the river. pic.twitter.com/6StnTv8wZp

Some tear canisters were launched into the canal in an apparent attempt to get migrants to disperse, witnesses said. Some found a hole in the fence, but it didn’t help:

WATCH: U.S. – Mexico border rushing: Migrants are being pushed back by riot police and border security after they broke through a fence at the San Ysidro border crossing. Reporter on the ground says that they (migrants) have nowhere to go, except back. pic.twitter.com/5ulxJT9SYo

The “peaceful” migrants threw rocks at the Americans protecting the border:

Here’s moment right before shot bang. You can see some rocks being thrown. pic.twitter.com/p0M9p7Rx4G

U.S. authorities appeared to deploy less-lethal ammunition and flashbangs at the group, and people scattered.

Customs and Border Protection officials said on Twitter that Border Patrol agents deployed tear gas after several agents were hit by projectiles thrown by migrants. You can see the moment when the crowd-control measures kick in.  Suddenly, the would-be border-rushers can’t get back into Mexico fast enough.

Today, several migrants threw projectiles at the agents in San Diego. Border Patrol agents deployed tear gas to dispel the group because of the risk to agents’ safety. Several agents were hit by the projectiles. The situation is evolving and a statement is forthcoming.

Mayor of #Tijuana: “I will not allow our bilateral relationship to be fractured by the bad actions of the migrant caravan. They’re doing things outside of the law. We are affected at the border crossing. Many Tijuanans work, study, and visit the United States in healthy peace.” https://t.co/fv0jJhByd4

Mexico will deport almost 500 migrants who attempted to storm the US border, according to its interior ministry.

The group were rounded up after trying to cross the border “violently” and “illegally” on Sunday, the ministry said in a statement.

Video footage shows dozens of people – including women and children – running towards the fence that separates the two countries near the city of Tijuana.

They were repelled by tear gas used by US border officers.

Mexico’s interior ministry said all those who were identified as having tried to cross would be deported immediately.

It added that, “far from helping their objectives”, the migrants’ actions had violated the legal migration framework and could have led to a “serious incident”.

This is the first of probably many incidents we will see of the migrant caravan trying to break into the country. This time the US border patrol and the Mexican Federales were able to hold their ranks, hopefully, they will receive all the tools they need to hold them off in the future. Knowing the border is a priority for President Trump, I am sure they will.