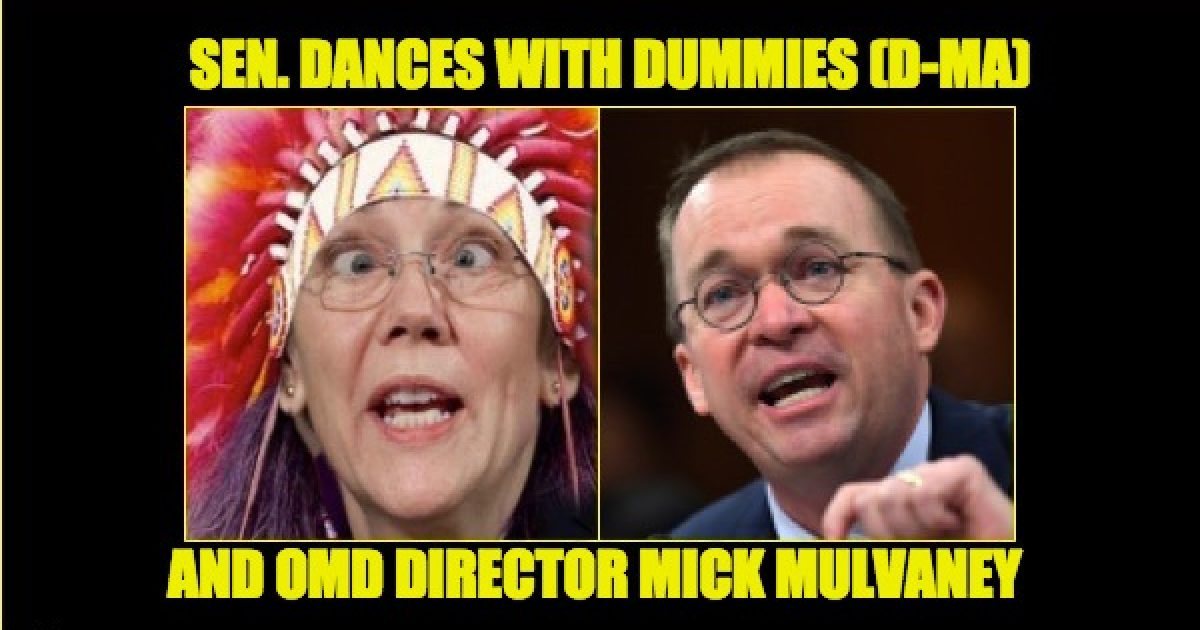 In a most ironic twist,  President Trump’s Budget Director and the Director of the Consumer Financial Protection Bureau (CFPB), Mick Mulvaney is now heading a bureau that he used to decry with regularity. In fact, Mulvaney is still pointing out the many different problems with the bureau even as he attempts to lead it in a productive direction.

Years ago, when Mulvaney was still a Congressman from the great state of South Carolina, he spent much of his time grousing about the fact that the CFFB was unaccountable to Congress.

Now that he leads the bureau, Mulvaney continues to warn his former colleagues that he has too much power, and not enough accountability. Just a few weeks ago, he wrote to them begging that his powers be weakened for the good of the American people.

Earlier this month, Mulvaney asked lawmakers to dramatically weaken his agency’s power, calling for changes that include Congress taking control of the CFPB’s budget and giving the president the ability to fire its director.

“The Bureau is far too powerful, and with precious little oversight of its activities,” wrote Mulvaney, who as a congressman had opposed the CFPB’s existence.

Earlier today, Mulvaney appeared before Congress and took the opportunity to again remind them that he was far too powerful

NEW: Mick Mulvaney (@CFPBDirector) – in opening testimony to Senate Committee on Banking, Housing, and Urban Affairs – says, “while I have to be here by statute I don’t think I have to answer your questions if you take a look at actual statute that requires me to be here”

Mulvaney explained to the Congressmen that while he is legally bound to appear before them, he doesn’t actually have to answer any of their questions.

“I want to make it clear, I’m going to answer every question that I can today. I’m not using this as an excuse not to answer your questions.”

Mulvaney actually said something similar in an appearance before Congress on Wednesday as well:

“I believe it would be my statutory right to just sit here and twiddle my thumbs while you all ask questions,” Mulvaney, acting director of the Consumer Financial Protection Bureau, told the House Financial Services Committee.

Conservative Congressman Jeb Hensarling (R-TX) was obviously amused by Mulvaney’s tactics and mocked his Democrat colleagues for being upset about their powerlessness when they designed the bureau in such a way as to ensure that the GOP couldn’t rein it in. However, they never foresaw a conservative leading the board and forcing its work to a standstill… and now they seem at a loss as to how to proceed.

The committee’s chairman, Rep. Jeb Hensarling (R-Texas), who has been the leading opponent of the bureau, said “it is sheer irony and great comic relief to see the wailing and gnashing of teeth of many of my Democratic colleagues” about their inability to hold Mulvaney accountable.

Hensarling validated Mulvaney’s view that Dodd-Frank doesn’t require him to answer lawmakers’ questions, adding that “you could play Candy Crush for the next few hours and there would be nothing we could do about it.”

Then Hensarling had Mulvaney say that there was nothing in the law to prevent him from spending $20 million a year to put the bureau’s name on a Texas football stadium or “ensure that every man, woman and child in American has a CFPB, T-shirt, ball cap and [can] coozy.”

Mulvaney also recently took the time to chide Senator Elizabeth Warren (D-MA) who was one of the driving forces behind the creation of the CFPB. Warren has been trying to get Mulvaney to answer some questions for several months now, and he has rebutted her every attempt. She recently sent him a letter with a list of questions about his work at the bureau, but Mulvaney responded by telling her that he wouldn’t be answering any of her questions and that he had no responsibility to answer her questions because of how she designed the bureau.

Acting Consumer Financial Protection Bureau director Mick Mulvaney has told Sen. Elizabeth Warren, D-Mass., that he doesn’t plan on responding to her questions about the agency, and said it’s her fault that he is not required to answer.

Mulvaney, a conservative who was an outspoken critic of the bureau during his time as a congressman, told Warren in a letter sent Wednesday that the structure of the agency, which she helped design, shields him from accountability.

“I encourage you to consider the possibility that the frustration you are experiencing now, and that which I had a few years back, are both inevitable consequences of the fact that the Dodd-Frank… Act insulates the Bureau from virtually any accountability to the American people through their elected representatives,” Mulvaney wrote.

He told Warren that he wouldn’t be answering any of the 105 unanswered questions she submitted to him about his management of the CFPB and handling of cases against payday lenders and others. Instead, he said he would discuss them during congressional testimony, when Warren will likely have five or 10 minutes to question him in the Banking Committee.

Sen. Pocahontas took it personally telling Mick Mulvaney that he took ‘obvious joy’ in upsetting her.

If trolling Pocahontas made Mulvaney happy,  could anyone really blame him?

In reality, as Mulvaney has pointed out, he didn’t have to answer her questions during the hearing either.

Taking a break from promoting hatred of Jews and the Jewish State, Congressman Keith Ellison (D-MN) has also been attacking Mulvaney recently. But instead of attacking the fact that Mulvaney has too much power, Ellison has been complaining about the use of “frosted glass” at the CFPB.

Mick Mulvaney touts himself as Mr. Transparency. But today when I showed him this picture, he admitted it was his office at CFPB and that he’d had the glass walls in the building frosted like this. How is that transparent? pic.twitter.com/XJjJYvVQSG

Mulvaney told Ellison that his predecessor had initiated the change from clear to frosted glass while noting that Ellison’s own office also had frosted glass. Neither of these things slowed Ellison’s complaints, as he shrugged off both statements.

The folks at Reason.com remind everyone that Ellison had no problem with the bureau’s structure when a leftwing Democrat was leading it, and even now, he’s not complaining about the obvious problems with the bureau, instead, he’s focusing on frosted glass.

Ellison—apparently under the impression that he had stumbled across a winning issue—also issued a press release on the topic and wrote a letter to Mulvaney, saying that “obscuring your activities behind frosted glass was antithetical to your professed goals of increased transparency.”

I can’t imagine what important information would be gleaned from requiring the head of a government agency monitored at all times by his subordinates. This is the kind of blatantly partisan and pointless griping that Democrats bemoaned under Pres. Obama. Given the significance and autonomy of the CFPB, Elisson’s crusade is borderline maddening.

As Reason‘s Eric Boehm noted in June, “the CFPB does not have to answer to Congress or the president for its actions. It gets its funding directly from the Federal Reserve, and is run by a single director (an unusual arrangement since most regulatory agencies are run by a bipartisan group of three or five individuals) who serves a 10–year term and cannot be removed from office before that time.”

Rather than take issue with this unaccountable structure, Ellison has praised it unconditionally, saying in a 2015 press release that “millions of Americans have had an ally protecting their mortgages, their paychecks, and their future.”

This was back when the unaccountable powers of the agency were wielded by a Democratic appointee. With this power now in the hands of his partisan foes, one might expect Ellison to interrogate the structure and powers of the office. Instead, he’s kvetching about its window tint.

Finally, over at Ace of Spades, they remind us why Mick Mulvaney should be everyone’s favorite government official.

While Mulvaney could walk down the street to the Federal Reserve and request (and get) $200 Million for his agency, he’s instead chosen to do his best to defend the American people. When he was forced to request a budget for his bureau for this coming fiscal year, Mulvaney requested $0.

Flashback: Because the CFPB skims money from the companies it bullies, it is largely self-funding in the same way an armed street gang is self-funding. Yet they usually demand the government pour even additional taxpayer monies into this shakedown operation anyway.

When Mick Mulvaney had to request budgetary money, he asked for zero. Not for a zero percent increase. He asked for zero dollars, period. He literally zeroed out his own agency’s budget.

Don’t worry — they’ll keep collecting the vig from the people they shake down.

But at least they won’t get any taxpayer money.

I’m not a gay, but looking at Mick Mulvaney’s Bad Boy motorcycle-leather appeal, I have to say: I get it, Gay Dudes. I get it.

We should all be thankful that President Trump had the foresight to pick Mulvaney out of Congress and drop him into the important leadership roles he now holds. As the acting Director of the Consumer Financial Protection Bureau, Mulvaney is the 2nd most powerful government official in the United States… and we are fortunate to have such a benevolent force for good in that position.

Most of this post was originally seen at Eagle Rising