I signed something saying that if I’m wrong I can go to prison. Did you? 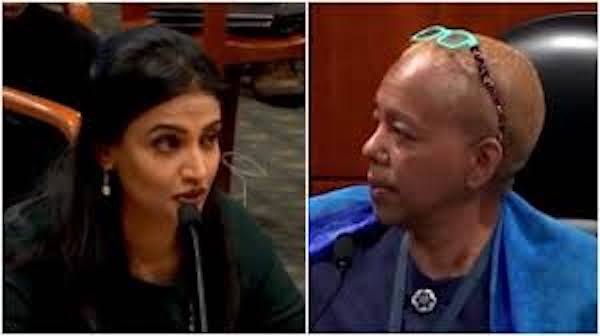 Democrat State Rep. Cynthia Johnson, the Minority Vice-Chair on the committee, interrupted proceedings during Kolanagireddy’s testimony to call into question the entire hearing and demand the witnesses be placed under oath.

Chairman Hall responded, “You’re out of order. I’ve indulged you, and we’re going to move on.”

Rudy Giuliani, legal counsel for the Trump campaign, interjected and reminded the panel that “every single witness we’ve presented here has sworn an affidavit as to all these facts.”

But it was Hima Kolanagireddy’s response to Johnson that served as a veritable mic drop.

“Can I say something please? If that is what you want me to do, I will do it,” she said in regards to making her claims under oath. “And I will still repeat the exact same thing. “And I also want to say one thing, if it is a lie, it may change because a liar has to have a lot of memory power,” Kolanagireddy continued. “But if it is the truth, you can ask me in the middle of the night, and it will still be the same.”

During another portion of the hearing, the unhinged Democrat Michigan State Rep. Cynthia Johnson forced a witness to give her maiden name, leading to accusations that she was trying to dox the woman.

Jenna Ellis, the senior legal adviser to the Trump campaign, called Johnson out on social media.

This is totally unacceptable that a sitting Michigan State Representative would try to intimidate and publicly dox a witness on national television simply because she doesn’t like the witness’s testimony,” she tweeted. “Sanctions?”

This is totally unacceptable that a sitting Michigan State Representative would try to intimidate and publicly dox a witness on national television simply because she doesn’t like the witness’s testimony.

Aside from Kolanagireddy’s admirable takedown of the Democrat lawmaker, other moments stood out as impactful during the hearing.

One witness, Melissa Carone, a reported Dominion-trained IT contractor, went off as well.

“I signed something saying that if I’m wrong I can go to prison. Did you?  she asked the Democrats on the panel.

Carone proceeded to explain that more witnesses aren’t coming forward because of fears of intimidation.

“I’ll tell you why [more witnesses won’t step forward],” she said. “My life has been destroyed. My life has been completely destroyed because of this. I can’t even get a job anymore because Democrats like to ruin your life,” she added.

Giuliani himself brought the fire when Democrat State Rep. Darrin Camilleri referenced a New York Times report indicating he had discussed a possible pardon with President Trump. Giuliani demanded Camilleri “be disciplined for that” question and accused the Democrat of “defamation of my character.”

Watch @darrincamilleri get the wrath of Rudy Giuliani after asking a disrespectful & completely asinine question pic.twitter.com/SHEMtSCWRH

The utter disdain expressed towards witnesses to alleged voter fraud is disgusting.

Asking them questions to try and dismantle their accusations is fair game. Trying to dox them and shouting that they are liars are the intimidation tactics of an unhinged group of juveniles.