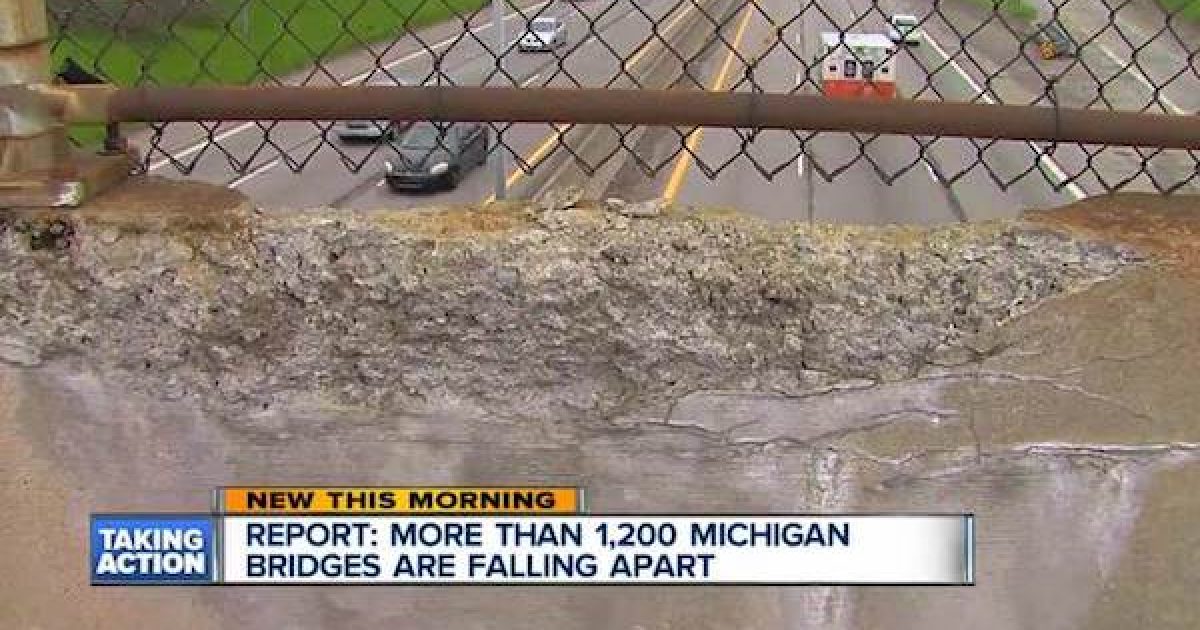 Its common knowledge that parts of Michigan are falling apart. One reason for the disintegration of infrastructure within Michigan is a jobs-killing union rule that drives up the cost of government projects. This puts many necessary repairs and upgrades outside the reach of State’s budget. Finally, this budget-killing rule has been thrown in the trash by the state legislature.

Wednesday, June 6th the Michigan House of Representatives and Senate passed a measure to put an end to the budget-killing union rule called the “prevailing wage.”  This rule required that all construction projects initiated by the state government to pay workers the same wage union members make,  even if the workers hired for said projects are not members of a union.

The repeal of this rule was first proposed by Protect Michigan Taxpayers, a group backed by Associated Builders and Contractors. ABC is a group that supports the “merit shop philosophy” in the building trades. Basically, it is a support group for non-union construction companies.

The petition submitted to the House could have been allowed to become a ballot measure, and likely that is what Protect Michigan Taxpayers expected to become of their appeal. However, the state legislature took up their option and as outlined in the State Constitution allowing the submission a petition straight to the state house, and that is what the Michigan Senate did when they heard the petition and then voted 23-14 to enact its provisions. That prompted the Michigan House to take up the idea and they passed it as well, 56-53.

Indeed, since the petition met the required number of signatures to be considered and since both houses of the legislature voted to approve it, this repeal doesn’t even have to go to the Governor’s desk for a signature. It will now become law.

Hence, Michigan’s prevailing wage rule is as dead as all the projects killed by the added expense caused by the wage rule.

This is all good news to a free economy not to mention a cost saver to the taxpayers. Now the state can pay the best prices for construction instead of being held hostage by union demands. It’ll save the people billions, and/or allow the state to get more done with the same money.

It also goes to show just how lousy unionism is for a government. Unions needlessly inflate costs in every way possible and don’t return much by way of benefits to a customer — or the taxpayers.

Unions are bad enough in the private sector. But at least in the private sector, there are some checks and balances–the marketplace. Just like punishment comes to businesses that make bad business decisions, private employee unions also realize punishment for their own overreach. At the risk of losing the whole enterprise both for unions and owners, the market serves to correct excess.

Unfortunately, there is no such corrective for union overreach for government employees. These unions rarely face any punishment for excess. And therein lies the reason that unions are antithetical to good government.

Back in 2009 the Heritage Foundation’s James Sherk took a look at the then current reports from labor and found that 12.4 percent of the American workforce is made up of union members (by 2018 it fell to 10.7 percent). But he noted that, while union membership had dropped to 7.3 percent of private sector jobs, it had risen to a never before seen 37.6 percent unionization of government employees — and this number is growing. Government workers now make up well over 50 percent of all unionized workers in the USA.

Why is this a bad thing? Sherk explained:

So when unions start lobbying, taxpayers should hold onto their wallet. Government employees don’t strike to get higher wages from a private business – they strike to get higher wages from you. Their pay is funded through your tax dollars. For government employee union members to get more your taxes need to go up. So that is what unions now lobby for. Just take a look at what the labor movement is doing to taxpayers on the Pacific Coast:

As we know, the United Auto Workers were strangling General Motors so horribly that the U.S. gov’t felt it had to bail out the automaker. The U.S. auto industry had been horribly unprofitable for decades but had limped along regardless. But, even limping along the UAW had to accept cuts and limits. Not so for public employee unions that only dip back into the taxpayer’s wallet for their generous benefits and pensions. And it is bankrupting nearly every state in the union. 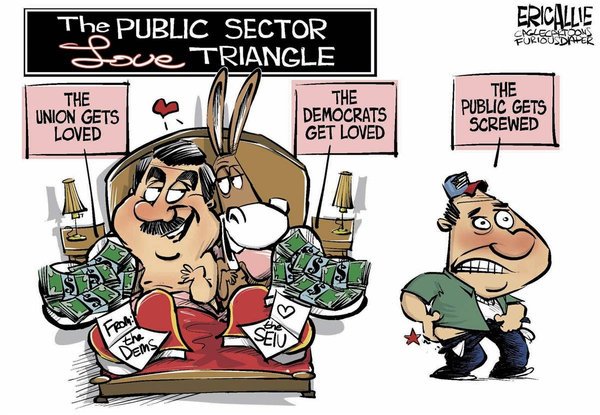 The solution, of course, is to outlaw the public employee union.

This is not a unique idea. After all, government employees have not always been allowed to unionize. Collective bargaining for public employees only started in 1958 after New York Mayor Robert Wagner signed what came to be called “the Little Wagner Act” allowing city workers to unionize. In fact, collective bargaining itself was only legalized even in the private sector in 1935 when Wagner’s own father, New York Senator Robert Wagner, sponsored the National Labor Relations Act, or the Wagner Act.

The fact is even after unions gained collective bargaining rights generally in 1935 public employees were logically and rightfully excluded from that ability. In fact, as several have noted over the last few weeks, even the patron saint of the left, President Franklin D. Roosevelt, stood foursquare against government employees allowed to collective bargain, and for a good reason.

All Government employees should realize that the process of collective bargaining, as usually understood, cannot be transplanted into the public service. It has its distinct and insurmountable limitations … The very nature and purposes of Government make it impossible for … officials … to bind the employer … The employer is the whole people, who speak by means of laws enacted by their representatives…

Particularly, I want to emphasize my conviction that militant tactics have no place in the functions of any organization of government employees. Upon employees in the federal service rests the obligation to serve the whole people … This obligation is paramount … A strike of public employees manifests nothing less than an intent … to prevent or obstruct … Government … Such action, looking toward the paralysis of Government is unthinkable and intolerable.

Additionally, public unions put politicians in the position of conflict of interests.  Unions are among the most significant political donors. Many of those public union donations go to the same people with whom they will be negotiating their next contract.

The fact is that public employee unions are antithetical to democracy and good government. Roosevelt knew this, and in its own way, the Michigan legislature is fighting alongside FDR.