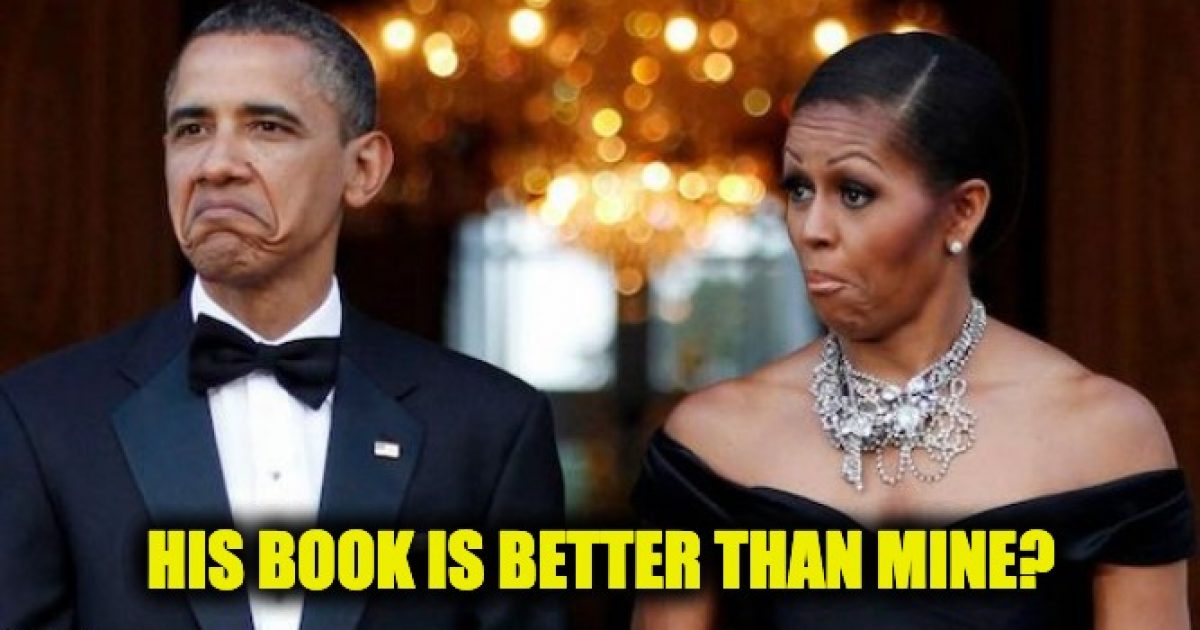 If Barack Obama is so competitive that he belittles his own wife’s bestselling book, then we need to revisit the truth of Barack’s bestseller.

I am not one to support Michelle Obama, but when I can expose Barack’s hypocrisy, I will certainly do that.

First, let’s pick up the report from The Free Beacon:

Former President Barack Obama wants to beat the book sales of his wife Michelle’s bestselling memoir when he publishes his own and even dings her for using a ghostwriter, according to a new report.

Obama, who has already written two memoirs, is trying to finish his third, which will reportedly cover his political career from 2004 to the present. Following the smashing success of Michelle Obama’s Becoming, which has sold more than 10 million copies and could wind up the bestselling political memoir ever, Obama is feeling pressure to beat her, The Atlantic reports:

The writing has been going more slowly than he’d expected, and according to several people who have spoken with him, the 44th president is feeling competitive with his wife, whose own book, Becoming, was the biggest release of 2018 and is on track to be the best-selling memoir in history. Speaking on the condition of anonymity, like others in this story, these sources note he’ll occasionally point out in conversation that he’s writing this book himself, while Michelle used a ghostwriter.

Again, I am not one to defend Michelle Obama, but any time I can point out Barack Obama’s hypocrisy, I am definitely willing.

Are you aware that one of Barack’s books, in fact, his most successful b0ok, was likely NOT written by him? In fact, Bill Ayers claims that he wrote Dreams from My Father.

Watch this video while it is still on YouTube and hear it from his own terrorist mouth:

OK now… was he joking?

Sometimes people do that you know.

But Ayers later insisted again that he wrote Obama’s book.

In 2014 Art Moore reported for WND that Ayers doubled-down on his claim that he, not Barack Obama, wrote Dreams from My Father:

Bill Ayers, the unrepentant former leader of the radical 1960s Weather Underground group, has been asked on several occasions over the past five years if he wrote “Dreams from My Father,” the book offered as evidence that Barack Obama is an intellectual heavyweight worthy of the Oval Office despite his relatively thin resume.

Aware of WND columnist and author Jack Cashill’s extensive literary analysis and independent corroboration by a friendly Obama biographer, Ayers has obscured his responses with a layer of irony, telling inquirers in essence, Yes, I did, and if you can help me prove it, I’ll split the royalties with you.

Prior to a debate Thursday night with author and filmmaker Dinesh D’Souza at Dartmouth College, Ayers brought up the subject himself in an exchange with WND senior reporter Jerome Corsi.

The conversation took a familiar path, but toward the end, Corsi tried to cut through the irony, pointing out to Ayers that he typically says he wrote it and will split the royalties with anyone who can prove it.

Corsi asserted that Ayers’ familiar, ironic reply was a declaration that he doesn’t really mean what he’s saying, that he was “taking it back.”

“No, it does not take it back,” Ayers insisted.

Barack Obama belittling his own wife for using a ghostwriter is Bush League.

The truth is that her ghostwriter is better than his own, or at the very least never blew anything up.

Or maybe she is just more interesting and it was better material.

I’ll never know because I won’t be reading it.

Good luck topping this book Barack. Better find someone better than Bill Ayers to write it for you.