It was a clear case of bitterness and lack of class by the former first couple. 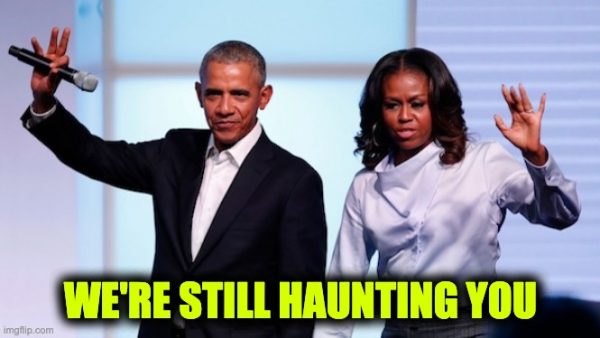 Michelle and Barack Obama took a few childish swipes at President Trump during the former First Lady’s debut podcast on Spotify. On the bright side, at least the podcast was a more appropriate forum than Barack Obama’s low-class performance at John Lewis’s funeral.

Mrs. Obama’s premiere episode was reportedly designed to be America’s “nationwide reckoning with race” and aims to “show us what’s possible when we allow ourselves to be vulnerable, to open up, and to focus on what matters most.”

Apparently, what ‘matters most’ to the former taking shots at his successor while never actually having the courage to name them outright. Which is unusual for Barack Obama—usually he’s taking shots at cops, gun owners, people of faith, and Jews.

The Huffington Post reports that Barack, at one point, discussed how young people’s interest in government is generally limited to when something goes wrong.

“We’re getting a good lesson in that right now,” he derided.

Perhaps he was referring to the Do Nothing Democrats and their impeachment scams, but we suspect this was directed at Trump.

Promoting the show, Spotify announced, “The First Lady. The first guest. The first episode. The #MichelleObamaPodcast is out now” Out Now? How exciting!

Reading that big news makes me want to pass out now.

The First Lady.
The first guest.
The first episode.
THE #MichelleObamaPodcast is out now. ?@MichelleObama and @BarackObama talk about life after the White House and the dreams they have for the next generation. Listen free, only on @Spotify ➡️ https://t.co/4UGLkiS3xY pic.twitter.com/mXLP5Y7WQy

In another not-so-subtle jab at the President, the pair discussed turning out voters in the next election.

Barack considers himself an optimist, trumpeting “I’m the ‘Yes, We Can!’ man. I am the ‘audacity of hope’ guy.” But to be honest, he was more of the I hate Capitalism and freedom guy.

“I think where we disagree is usually you [Michelle] just think things just have to get super, super bad before folks figure stuff out,” the former President lamented.

Mrs. Obama replied, “Well, I hope we’re at that point.”

Actually, folks, when things got super-bad, we voted for Trump.

She continued, “Well, as you pointed out as a former president who reads and knows history – Let’s just take a moment to pause and think about that – But as that person, you understand the arc of progress.”

A pretty clear shot at President Trump, inferring he is ignorant.

It was a clear case of bitterness and lack of class by the former first couple.