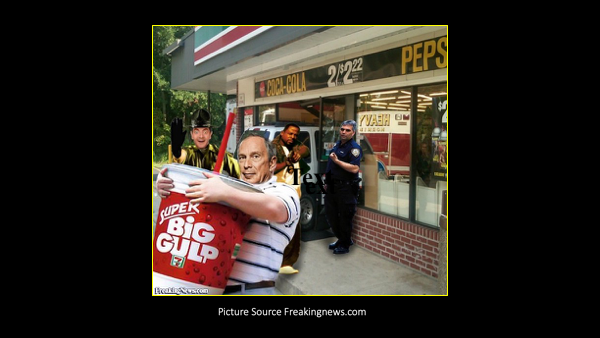 There used to be a social stigma against believing and behaving as if one is entitled to tell perfect strangers how to speak, what to do, or how to live. Michael Bloomberg control

Sadly, that stigma is all but gone today.  More people than ever are willing to use the force of government to compel their fellow citizens to comply with their own changing set of mandates.

I am fascinated by the causes that have compelled so many Americans to lose perspective on this fundamental principle of freedom.

Take Michael Bloomberg… please!  What drives this man with the freedom to enjoy his wealth in 65 billion different ways, to spend his time trying to curtail the freedoms and choices of others, even down to the size soda they drink and the amount of salt they ought to be allowed to sprinkle on their spinach?

Coloradans know all too well that the former New York Mayor and Democratic Presidential Candidate spent boatloads of cash pushing state legislators to clamp down on their God-given right to defend themselves and their families.  He has pushed freedom-sucking and blatantly biased “Red Flag” bills in numerous other states around the country.

Mayor Busybody simply can’t stop telling others what to do. It seems to be an obsession with him—or maybe, a compulsion too.   I gained insight into this when I returned to a New York Times article from 2009 that described Bloomberg’s eating habits.

“He dumps salt on almost everything, even saltine crackers. He devours burnt bacon and peanut butter sandwiches. He has a weakness for hot dogs, cheeseburgers, and fried chicken, washing them down with a glass of merlot. And his snack of choice? Cheez-Its.”

Obsessive-Compulsive Disorder (OCD) is about control. Controlling one’s out-of-control thoughts, feelings, and behavior by attempting to control his external environment.  Consciously or unconsciously, those afflicted do this in vain, to the point where they feel unable to control the compulsion as well (as in excessive hand-washing).

Most sufferers aren’t dangerous unless they have 65 billion dollars and a God-complex.

The Times went on to report this delicious insight:

“…he (Bloomberg) is known to grab food off the plates of aides and, occasionally, even strangers. (“Delicious,” he declared recently, after swiping a piece of fried calamari from an unsuspecting diner in Staten Island.)”

Behavior like this exhibits a staggering and extreme lack of boundaries.  The Times seems to only snicker at this, but it’s painfully clear that Bloomberg has great difficulty respecting the basic boundaries of civil society.  No wonder it’s so easy for him to help himself to your freedoms and your choices when he can’t stop helping himself to your calamari.

As a rule of thumb, the most flawed and arrogant people are most likely to believe they know what’s best for everyone else and should be allowed to trample on our freedoms.  Those who are secure and comfortable in their own skin do not have a need to control others. They have the basic self-confidence to tolerate and even enjoy the uncertainty of others’ choices and behavior.  They reserve more extreme action for times in which there has been the actual commission of a crime.

These cultural underpinnings of freedom have been essential to what America is. Socialists have been systematically unraveling these norms in a big way.  They have not only been more open about their ideology, but they have also been working feverishly to put it into practice and prepare more Americans to accept it.

How can we put an end to the presumptuousness of these troubled, would-be tyrants?  First, we can return the stigma attached to telling other adults what to do and how to live.   We can once again elevate the notion that the right to think one’s own thoughts, make one’s own choices, and live one’s own life is sacrosanct, regardless of how flawed, unpopular, or even offensive those choices might be.

The imperative of Liberty requires that the individual take responsibility for his own successes and failures so he can learn from his mistakes. In protecting others’ freedoms, he protects his own. We used to know this, but it has been unlearned.

As for Michael Bloomberg, he has begun to help our side more than he could have imagined. His off-the-scale ignorance and arrogance were hilariously exposed in his first Democrat primary debate.

If we play our cards right, Bloomberg could help us take a “Big Gulp” toward returning a sensible social stigma of proclaiming oneself as lord and master over the rest of us.

It’s a reasonable strategy, and it shouldn’t cost 65 billion dollars.