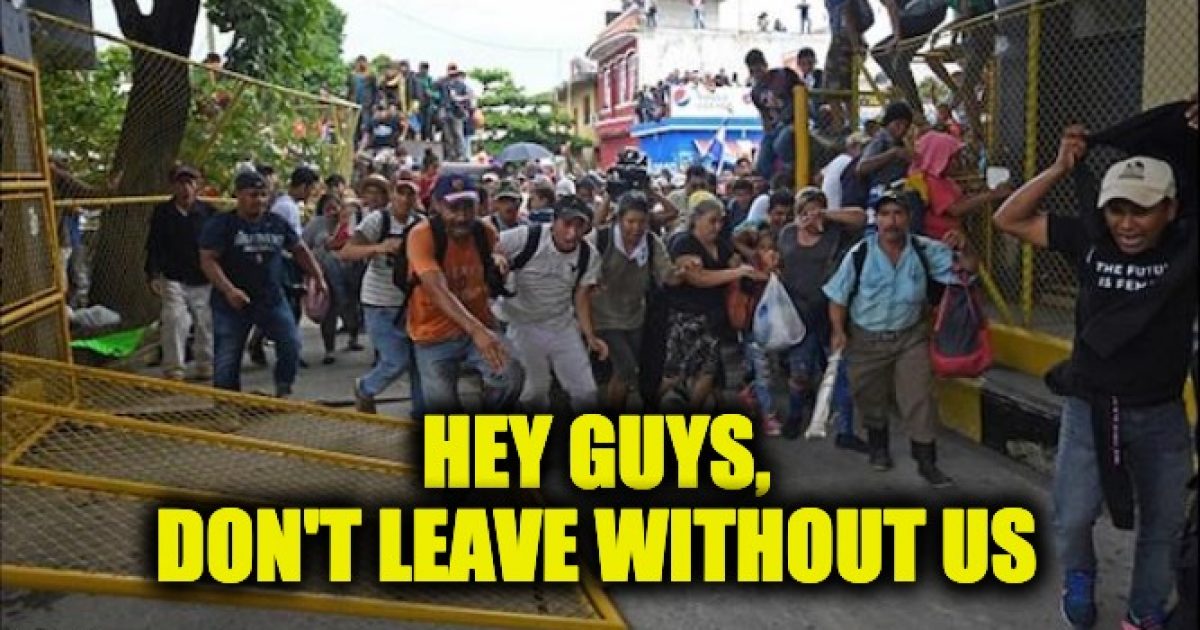 Illegal Migrants have stormed Mexico’s southern border and burst through the fence to join the latest migrant caravan, as Mexico tries to crack down on illegal immigration.

Mexican authorities said a group of about 350 migrants broke the locks on a gate at the Guatemalan border and forced their way into southern Mexico to join a larger group of migrants trying to make their way toward the US.

Per the Washington Examiner the Mexican immigration authorities said:

..the migrants were acting in a “hostile” and “aggressive” way and accused them of also attacking local police in Metapa, a Mexican village that lies between the border and the nearby city of Tapachula.

The group of 350 pushed past police guarding the bridge and joined a larger group of about 2,000 migrants who are walking toward Tapachula in the latest caravan to enter Mexico.

Claudia Jaqueline Sandoval, 43, from El Progreso, Honduras, was walking toward Tapachula with her 6-year-old daughter. Another son and daughter are already in the United States.

“I have been HIV positive for 16 years,” said Sandoval, but her reason for going north was not just medical treatment. “It has been two years since I heard from my son” in the United States, and money is scarce, she said.

The Epoch Times offered some interesting information about the ones who make it to the border.

In fiscal year 2017, border patrol apprehended 94,285 family units from Honduras, Guatemala, and El Salvador at the Southern border. Of those, 99 percent remain in the country today, according to the Department of Homeland Security. YIKES

So far, the policy is implemented in San Diego’s San Ysidro Port of Entry, the busiest border crossing in the country, and has expanded to other ports of entry at the border. Thousands of migrants from the Northern Triangle countries arrived in nearby Tijuana last year. It’s also believed to be the destination of the latest Honduran caravan headed north.

Honduran reporter Josue Cover told The Epoch Times on Jan. 17 that coyotes encourage migrants in the caravan to bring young children along the journey north.

“The coyotes tell them that ‘please, if you are going to come, then come with a minor, with a baby, because that way you are given more support,’ that is, they are given the opportunity to cross to the United States,” said Cover.

Cover said local coyotes also tell minors they have a better chance of entering the United States if they go alone.

That’s what the POTUS has been telling America, but the Democrats refuse to listen.

Per ABC News the migrants aren’t too happy once they get into Mexico either:

A group of several hundred Cuban, African and Central American migrants have been waiting at the immigration offices in Tapachula for documents that would allow them to travel to the U.S. border, where most plan to request asylum.

Some members of that group have scuffled with immigration authorities and broken windows at the offices in recent days, accusing officials of making them wait too long for papers.

And another group of an estimated 2,500 Central American and Cuban migrants have been stuck for at least a week further west in the Chiapas town of Mapastepec, also waiting for papers.

If they get some transportation help (and they usually do) after these immigrants who have trespassed into Mexico receive their papers, it will take only a few days before they reach the border between the US and Mexico and attempt to become Illegal immigrants in the US. And if they aim right, they won’t have to break through a fence, wall or any other kind of barrier, thanks to the tag team of obstructionists, Nancy Pelosi, and Chuck Schumer. If this caravan makes it into the U.S., they should stop at the first greeting card store they see and buy Chuck and Nancy cards thanking them for their hard work in making sneaking into America so much easier.