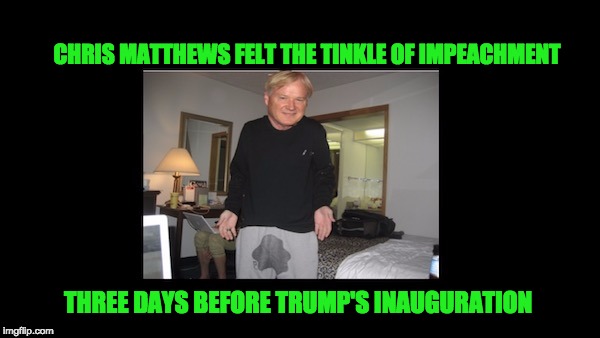 Surprised that the MSM is talking about calls for President Trump’s impeachment even though there is no evidence he did anything wrong? You shouldn’t be. The Liberals and the Mainstream Media did not waste time. They started mentioning calls for impeachment during his first week in office,

Based on a review of the first 200 of the 15,000 Google News results +trump+impeachment, it is estimated there were 3,750+ mentions of Trump’s impeachment in mainstream vehicles. Most were not calling for impeachment, but covering others who called for or mentioned the possibility of impeachment. Some of the coverage came from conservative media generally covering impeachment talk by others.  For example the one reference that was from before the inauguration was a Fox News reference to Chris Matthews and Maxine Waters discussing impeachment on January 17th.

Why is any of this important?  It is just one more piece of evidence that the media has been biased against President Trump from the very beginning. During the first week of any other presidency the media would have ignored calls for impeachment by others, or at the very least treated them with scorn.

The methodology used to estimate the number of references was as follows: if  one searches +trump+impeach Google News for the time period from Inauguration Day-January 26th 2017 (President Trump’s first week) the total results will surpass 15,000.

Applying that to the total number of references gives us our estimate of 3,500

Below is the list of the 50 found by searching the first 200 of 15K references or if you wish click here and read all 15,000+ references. When you are all done, try and convince people that the MSM is NOT biased:

The video below was put together by Western Media