Warren’s Medicare For All: The Longest Political Suicide Note In Recorded History 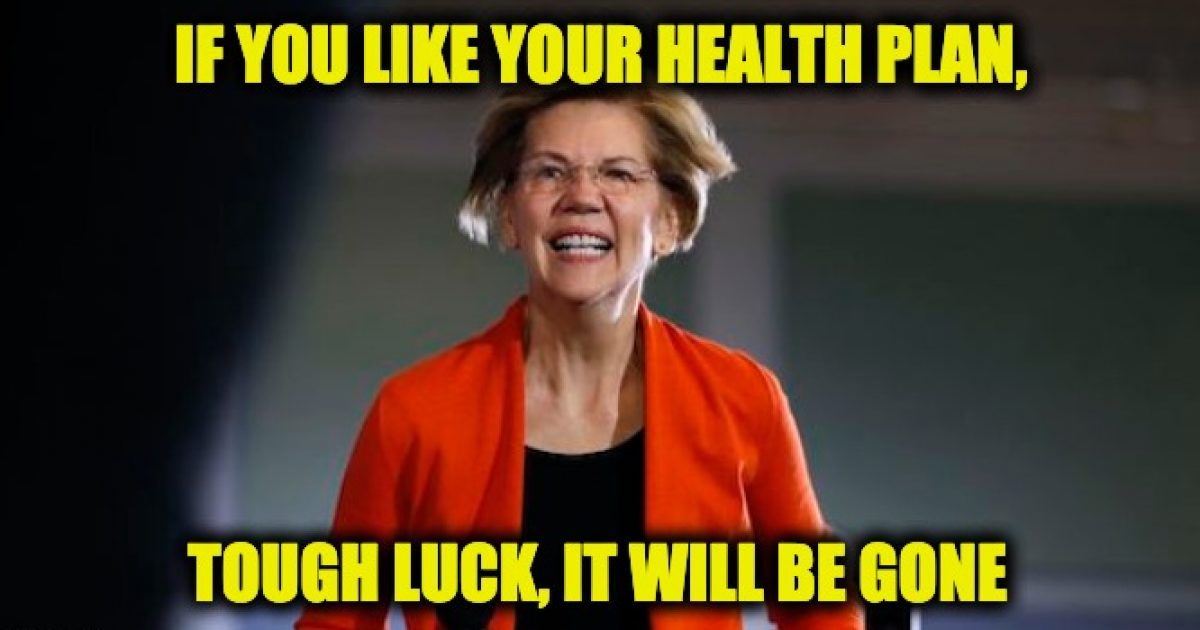 Left-leaning  commentator William A. Galston wrote in the Wall Street Journal:  Medicare for all

Ms. Warren insists that if Democrats are willing to put up a fight, they can get Medicare for All done. As I recall, the Light Brigade was full of fight, but its charge into enemy lines still yielded an epic catastrophe.

Ms. Warren should be commended for the wealth of detail in her plan, which allows voters to judge it for themselves. This said, she may well have penned the longest suicide note in recorded history. There’s no reason for the entire Democratic Party to sign it.

He may very well be correct. Warren’s medicare plan will lead to the death of her campaign. Especially her promise that if you like your plan, tough luck, you can’t keep it.

According to the most recent government statistics, more than 218 million Americans now participate in private health-care plans, of which 179 million are employment-based. As critics of Medicare for All have pointed out, many of these plans are the result of tough negotiations in which employees have compromised on wages and working conditions in return for more-generous health-insurance benefits. These workers would be asked to surrender their hard-won gains in return for a promise that they will prefer what they get from the government instead.

If you want to know why Elizabeth Warren’s big plans for Medicare for All is a humongous train wreck, look no further than England, where a similar program has been in place for decades.

The UK and Canada’s Medicare For All

The NHS – National Health Service in England has been in place since July of 1948. It is funded by taxes, and all medical care is “free at the point of service.” For many who live there, it’s good to have free healthcare for all. Canada also has a similar program, which they’ve had since the 50s. But what’s the problem if it’s so good?

There are several medical problems if the program gets implemented:

Wait times is a significant issue, according to Forbes. If you are already in the hospital, there really is no wait time for your surgery. If, however, you need surgery and are waiting for it on the outside…good luck. The waiting list is quite long. Some people who have enough money sometimes opt to come to the United States to get their medical care. More than 36,000 people have been in line to wait for 9 months or more, according to the Forbes article.

“Long waits for care are endemic to government-run, single-payer systems like the NHS. Yet some U.S. lawmakers want to import that model from across the pond. That would be a massive blunder.” Sally Pipes, Forbes Contributor

Then there’s the shortage of medical professionals, which is slowly increasing, but not at the top yet. (No surprise if you don’t pay them very much).  The NHS record for treating cancer is abysmal, according to Fox.

English citizen Jessica Hullinger wrote in The Week about her experience in a NICU hospital:

“Perhaps the most dehumanizing part of this entire experience was how powerless we felt. There was no one I could complain to, no manager I could shake my fist at. We were just another disgruntled, weary family clutching our newborns and waiting to be released. That’s the thing: When you take the money out of medicine, when you’re no longer a paying customer with alternative options, you lose your leverage. You are at the mercy of the system…

So let’s tackle Elizabeth Warren and her Medicare for All. (Also promoted by Bernie Sanders and AOC). Aside from the massive $52 Trillion price tag (plus $20 Trillion in new spending), which will be paid for by you, the American taxpayer, it will create a quagmire of wait times.

You only need to look at the consequences of long wait times with our veterans to understand the potential for loss of life. The father of a Canadian friend of mine needed a new liver.  He not only had to wait months to see a doctor but when he finally saw one, they determined that he was too old to receive medical attention. He was a guy who was independent and very active. The Canadian Medicare for All type of system condemned him to death.

Warren believes that her program can be funded entirely by taxes on the wealthy. The  Committee for a Responsible Federal Budget says it would be impossible to do by only taxing wealthy people, and she’s not talking about an income tax, Warren wants a wealth tax. In other words, if you own a Picasso, you will have to pay taxes on the value of that Picasso every year you own it.