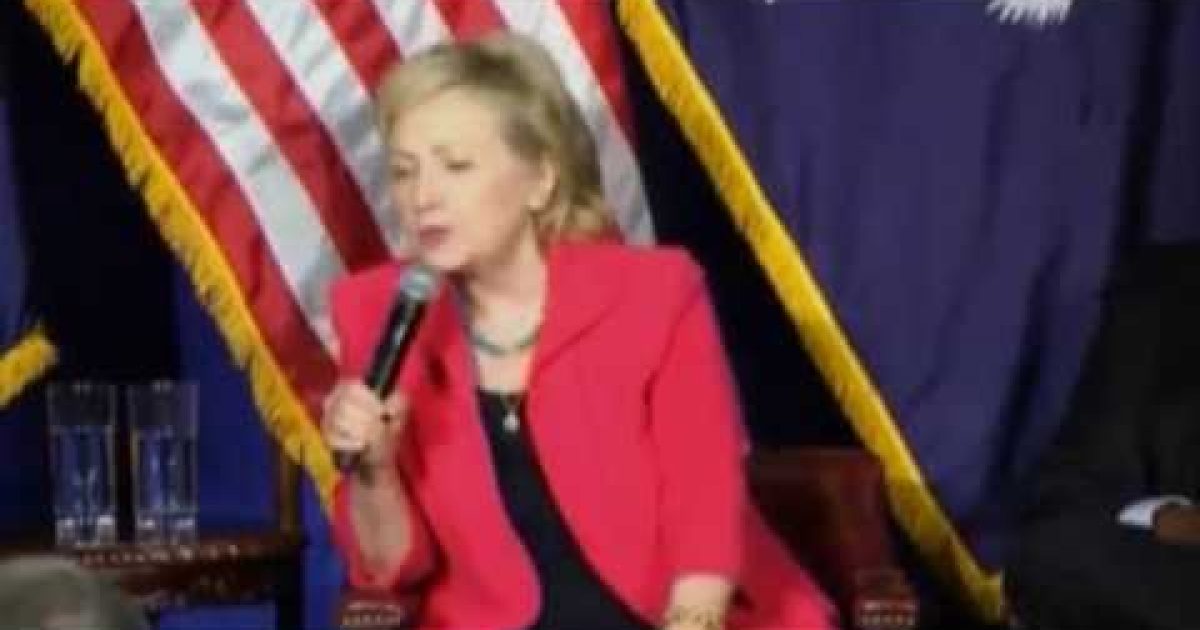 For the last 48-hours the mainstream media has been going crazy calling Donald Trump an anti-Semite because of this tweet:

Now while I can totally understand that people believed it was meant to be a מָגֵן דָּוִד (Magen David which translates into English as Shield of David) commonly known as a Jewish Star. And that if it was meant to be a Jewish Star, it is possible the Trump tweet was anti-Semitic. But IMHO, the tweet wasn’t meant to be a Magen David, and if the the MSM really wanted to delve into the Antisemitism of one of the major party candidates they are looking at the wrong one. Despite how the liberal Jewish community adores Ms. Clinton, she has never reciprocated with good feelings toward the Jewish community (except when she needed their campaign money and votes). Hillary is an anti-Semite.

Let’s start with the Trump tweet.  I guarantee you that some low-level staffer found the image in something like a google image search. And yes I believe that staffer sold it up the line as a sheriff’s badge. In other words it was a really stupid mistake.

Trump has a Shabbos-observant daughter (she even told Vogue Magazine how much she enjoys shutting down her electronics for 25 hours on the Sabbath). Trump’s orthodox Jewish son-in-law is one of his closest advisors, and he has three Jewish grandchildren–pretty hard to believe the man is a Jew hater.

As soon as people began to push back against the tweet, calling it anti-Semitic it was changed.

If anything the media should be criticizing the Trump for making a stupid blunder.

But if they want to investigate Antisemitism, here are some great examples.

In his book American Evita on page 50, Christopher Anderson writes relates a 1973 anti-Semitic incident where she Hillary Clinton refused to enter a home that a menorah on its door.

It was during this trip to his home state that Bill took Hillary to meet a politically well-connected friend. When they drove up to the house, Bill and Hillary noticed that a menorah-the seven branched Hebrew candelabrum (not to be confused with the more common and subtler mezuzah)-has been affixed to the front door.

“My daddy was half Jewish,” explained Bill’s friend. “One day when he came to visit, my daddy placed the menorah on my door because he wanted me to be proud that we were part Jewish. And I wasn’t about to say no to my daddy.”

To his astonishment, as soon as Hillary saw the menorah, she refused to get out of the car. “Bill walked up to me and said that she was hot and tired, but later he explained the real reason.” According to the friend and another eyewitness, Bill said, “I’m sorry, but Hillary’s really tight with the people in the PLO in New York. They’re friends of hers, and she just doesn’t feel right about the menorah.”

Understand, the guy didn’t have an Israeli flag on his door but a symbol of his Jewishness.

Hillary has sat through and refused to correct people making modern-day blood libels, false accusations against the Jewish State.

In November 1999, while first lady, she went on a purported state visit to the Middle East. Hillary was at a  public appearance with Yasser Arafat’s wife Suha, and listened to Mrs. Arafat made a slanderous allegation:

“Our [Palestinian] people have been submitted to the daily and intensive use of poisonous gas by the Israeli forces, which has led to an increase in cancer cases among women and children.” Suha also accused Israel of contaminating much of the water sources used by Palestinians with “chemical materials” and poisoning Palestinian women and children with toxic gases.”

Mrs. Clinton sat by silently listening to a real-time translation, and the gave the terrorist’s a wife hug and  kiss when she finished speaking.

Later, many hours after the event, and only after a media furor put her on the spot for what many view as a bit more than a mere political “boo boo Mrs. Clinton called on all sides to refrain from “inflammatory rhetoric and baseless accusations.” She included Israel even though her leaders made no such accusations.

Glossing over this repugnant affair, Hillary Clinton has yet to specifically contradict and denounce the monstrous lies uttered by Yasser Arafat’s wife in her presence. Years later she did attempt to make feeble attempt at an excuse—the translator screwed up.

In July 2015 she did the same thing. While taking questions during a campaign appearance at the Brookland Baptist Church, Columbia SC South Carolina,  a woman asked three questions at once.  The first query was about solving poverty, the second was about the three-strike law, and the third:

My third question is about Israel, we spend too much money, $6 billion dollars to Israel funding apartheid! There is not the shared values that we are supposed to share with Israel!

Ms. Clinton was silent about question number three, once again she had the opportunity to correct a false accusation against the Jewish people, and once again she refused… This time however she couldn’t blame the translator.

Of course there were the times Hillary compared Orthodox Jewish practice to the Muslim zealots in Iran.

In 2011 speaking at the at the Saban Center for Middle East Policy part of the liberal Brookings Institute, Clinton trashed Orthodox Jewry by expressing concern for Jewish State’s social climate in the wake of limitations regarding female singing in the IDF and gender segregation on public transportation. Both were accommodations made to the Orthodox communities in Israel and Hillary’s complaints were based on false information.

Clinton referred to the decision of some IDF soldiers to leave an event where female soldiers were singing; she said it reminded her of the situation in Iran. It did? Wow! In Iran the women would have been lashed or executed. In Israel they were allowed to sing, and the people who felt it was against their religious beliefs were allowed to walk out. That’s it! Most senior officers in the IDF supported the women’s right to sing. That’s called religious freedom.

Clinton also spoke of her shock that some Jerusalem buses had assigned separate seating areas for women. “It’s reminiscent of Rosa Parks,” she said, taking the typical progressive position that faith should not matter outside a place of worship.  Again in this case Hillary trashed an accommodation for Orthodox Jewish practice without understanding it’s extent.  It is not all buses it is only certain buses run by privately owned lines originating/terminating in certain Orthodox neighborhoods and per the Israeli Supreme Court the separate seating was voluntary. That’s called religious freedom.

Many people were shocked at Max Blumenthal tweet after the death Elie Wiesel who was in a Nazi concentration camp until he was 16 and spent the rest of his life fighting for the human rights of the oppressed:

Why is this relevant? Because Max is an anti-Semite and connected to Hillary Clinton.

Max Blumenthal’s writings about Israel go beyond a simple criticism of the Jewish State and into the repulsive realm of Antisemitism. His latest book Goliath includes chapters comparing Israel to the Nazis, such as “The Concentration Camp,” or “The Night of Broken Glass,” and others which are just slanderous, like “How to Kill Goyim and Influence People,” all of them reminiscent of the anti-Semitic blood libels popular in medieval Europe.

As Alan Dershowitz said in an interview with Breitbart News:

Max Blumenthal is well outside the acceptable range of rhetoric about Israel. His constant comparisons between Nazi Germany and the Jewish state establish him as an extremist bigot whose greatest appeal is to anti-Semites and others who apply a double standard to the Jewish state….no decent person should ever support the views expressed by Max Blumenthal.

Max is the son of Sidney Blumenthal close advisor of Hillary Clinton. That in itself isn’t a connection, but the fact that when she was Secretary of State, Sidney sent his son’s anti-Semitic tomes to Hillary who would share them as policy to her subordinates. According to the Wikileaks searchable database of Hillary’s emails there were 199 Max emails in the released Hillary database.

Including this one for example which psychoanalyzed Israeli premier Binyamin Netanyahu and refutes the biblical claims off the Jewish people to the land of Israel, and talked about Bibi’s dad as an extremist, all of which Jake Sullivan found very interesting.

Later on in the email Blumenthal seems to put down the traditional Jewish claim of a historical right to Judea and Samaria:

By depicting Obama as “weak” on Israel, Netanyahu’s campaign excites right-wing Jews and evangelical Christians, who overwhelmingly accept the biblical claims of the Jewish state’s historical right to Greater Israel, Judea and Samaria.

Not that Sidney Blumenthal is any better than his son:

Blumenthal sent dozens of e-mails advising Clinton on Israel in 2010. Before her March speech at the American Israel Public Affairs Committee (AIPAC), Blumenthal sent Clinton a breathless article from left-wing Israeli writer Uri Avnery accusing the Netanyahu government of “starting a rebellion” against the United States and defending interests that diverge from America’s. “I have to speak to AIPAC tomorrow,” Clinton responded. “How — and should I — use this [sic]?” Blumenthal promised to send another memo the next day.

In that memo, he instructed Clinton to “hold Bibi [Netanyahu]’s feet to the fire” on the Israeli-Palestinian peace process. “Perhaps most controversial,” he continued, would be for Clinton to “remind [AIPAC] in as subtle but also direct a way as you can that it does not have a monopoly over American Jewish opinion. Bibi is stage managing US Jewish organizations (and neocons, and the religious right, and whomever else he can muster) against the administration. AIPAC itself has become an organ of the Israeli right, specifically Likud.”

By the way,  if you asked Likud, they would claim that AIPAC favors Israel’s leftist parties.

On May 17, Blumenthal forwarded Clinton an article on the Israeli government’s decision to deny professor and Palestinian activist Noam Chomsky access to the West Bank. “Barring him for his political opinions has created a needless PR disaster,” he wrote. “The US should not be a passive onlooker. . . . The US effort on his behalf to gain entry should be part of the story.” Clinton forwarded the memo to staff with instructions to “pls print 3 copies.”

Chomsky has been fierce in his opposition to Israel’s right to defend herself from terrorism and has been called an anti-Semite:

In an e-mail from May 31 entitled “Several observations on the Israeli raid,” Blumenthal blames Israeli Prime Minister Bibi Netanyahu’s family inferiority complex for his decision to launch a raid on the so-called “Gaza Flotilla,” a group of ships seeking to break the Israeli blockade of Gaza. “Bibi desperately seeks his father’s approbation and can never equal his dead brother,” Blumenthal wrote. He then hinted that the raid was deliberately orchestrated to kill the peace process and humiliate President Obama before his scheduled visit with the prime minister. Clinton forwarded the message to Jake Sullivan, her deputy chief of staff at the State Department. “FYI and I told you so,” she wrote

So as the media continues to label a stupid mistake by a Trump staffer as anti-Semitic, let’s concentrate on the real truth, if any of the two major candidates could be considered anti-Semitic, it’s Hillary Clinton.