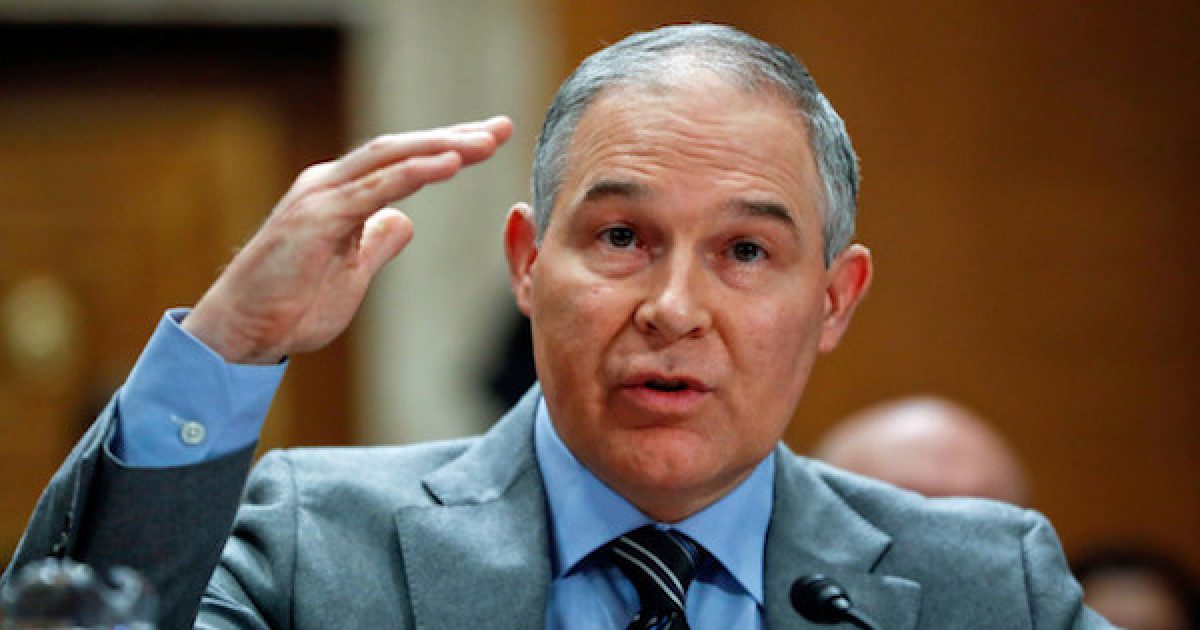 It’s been obvious for some time that there is a concerted effort underway to take out Donald Trump’s EPA Director, Scott Pruitt.  Pruitt is being attacked for everything he does, with the media reporting his very ordinary travel, administrative expenditures, and now his temporary living arrangements in Washington as if they are examples of scandalous profligacy, or (in a veritable paroxysm of irony, given where this is coming from) cronyism.

I will leave it to the Daily Caller News Foundation’s Michael Bastasch – whose usual high standard of reporting is incorporated below – to recount the brief being built against Pruitt.

My contribution in this post is adding a bit about the source going in.  As Bastasch notes, the source of much of the negative narrative-building on Pruitt is the Environmental Integrity Project (EIP).  The EIP is a nonprofit founded in 2002 by Eric Schaeffer, a disgruntled EPA official.  Here is how EIP describes it:

The Environmental Integrity Project was founded in 2002 by Eric Schaeffer, who resigned his position as director of the U.S. Environmental Protection Agency’s office of civil enforcement in protest when the Bush White House clearly interfered with Clean Air Act efforts to reduce pollution from coal-fired power plants.

EIP has a strong animus against coal, as you can learn from the website.  Savvy readers also understand that much of what progressive-left nonprofits do is about who runs them and who funds them, and on both counts, EIP is knee-deep in usual-suspect connections, including the constellation of Obama’s green-energy cronies.

Regarding funding, prominent sources for EIP, as documented by a congressional report in 2014, are the Wallace Global Foundation and the Energy Foundation, which in turn gets much of its funding from the Sea Change Foundation set up by renewables billionaire Nat Simons, a major beneficiary of Obama’s green-energy cronyism.  (And yes, both foundation sources send money to and from the Tides Foundation and others in the standard list of progressive and radical-left money sumps.)

Sea Change has popped up behind many anti-fracking pushes, with a key connection – a shadowy firm called Klein Ltd. – apparently having links to big names in Russian energy.  Without making claims about what that means, we can nevertheless take note of the fact that Sea Change, through the Energy Foundation, was behind a highly – demonstrably – deceptive report published by EIP in 2016 about effects from fracking in Pennsylvania.

Those who follow the highly networked, heavily funded world of green-energy messaging won’t be surprised by this.  The fact that EIP put out a report that simply ignored recent, contra-indicative research is an important one, and we shouldn’t miss it.  EIP publishes dubious and easily countered material.  It is not necessarily a reliable source.

But we also shouldn’t be surprised that Nat Simons was revealed to be a close associate of Hillary Clinton’s in the 2016 timeframe, along with other green-energy moguls like Tom Steyer.

Steyer is a top participant in Democracy Alliance, whose members and affiliated nonprofit basically account – as far as can be discerned – for much of EIP’s funding (see the congressional report from 2014).  EIP’s formal financial documents show all the top donors as anonymous; its annual reports list a number of donors by name but include anonymous donors in the top two tiers, where virtually all the money comes from.  Bottom line: EIP’s funding doesn’t yield a trail of accountability.

Before moving on to the individuals in charge of EIP, it’s worth noting that the first funder mentioned, Wallace Global Foundation, has been prominently involved in a number of instances in promoting political messages via media nonprofits and (thence through) the mainstream media.  The Media Research Center’s work indicates that thematic messaging – as in, “Scott Pruitt is a big anti-environmentalist scandal!” – is a major line of effort for WGF.

As for the people involved, Tom Shepstone (Natural Gas Now link, above) points out that EIP’s board president is R. John Dawes, who runs anti-fracking nonprofits funded by the Heinz Endowments, which is also a top source of funding for EIP (as well as of numerous other left-wing groups).

Larry Shapiro, whom Shepstone also highlights, is a long-time litigator who has made a livelihood from the sue-and-settle practices of the EPA, which ramped up significantly under Bill Clinton, and later exponentially under Barack Obama.  Republican administrations (other than Richard Nixon’s) have tended to be financially disappointing times for environmental law practices.  Trump’s EPA, under Pruitt, is actively rolling back regulations that would otherwise keep environmental law practitioners in lucrative work for decades.

Board treasurer Wesley Warren is an officer with the Natural Resources Defense Council, a former official in the Clinton Administration, and long-time associate of EIP founder Eric Schaeffer.  When Schaeffer resigned from the EPA in 2002 and founded EIP, Warren was quoted as complaining that “the barbarians have gone beyond the gates.  They are in the White House.”

The prize for vindictive environmental progressivism must go, however, to EIP board member Al Armendariz, an EPA regional director under Obama who ended up having to resign after a video went viral in which he urged the metaphorical “crucifixion” of fossil fuel energy companies. (Video below.)

CNSNews’ Michael Chapman transcribed the passage in 2012 when Armendariz resigned. (The speech was in 2010.  Emphasis below is from the CNSNews original.)

In the video, Administrator Armendariz says:

“I was in a meeting once and I gave an analogy to my staff about my philosophy of enforcement, and I think it was probably a little crude and maybe not appropriate for the meeting, but I’ll go ahead and tell you what I said:

“It was kind of like how the Romans used to, you know, conquer villages in the Mediterranean.  They’d go in to a little Turkish town somewhere, they’d find the first five guys they saw and they’d crucify them.

“Then, you know, that town was really easy to manage for the next few years.”

“It’s a deterrent factor,” Armendariz said, explaining that the EPA is following the Romans’ philosophy for subjugating conquered villages.

Tellingly, Chapman noted the messaging campaign mounted by the EPA against oil companies in the wake of this disclosure by Armendariz.

“Not long after Administrator Armendariz made these comments in 2010, EPA targeted US natural gas producers in Pennsylvania, Texas and Wyoming.

“In all three of these cases, EPA initially made headline-grabbing statements either insinuating or proclaiming outright that the use of hydraulic fracturing by American energy producers was the cause of water contamination, but in each case their comments were premature at best – and despite their most valiant efforts, they have been unable to find any sound scientific evidence to make this link.”

Armendariz apparently considered this a proper and useful practice, in order to accomplish EPA goals.

That’s what is going after Scott Pruitt.  Money, from green-energy cronies, that chased Obama and Hillary around for the last 10 years, and that has been involved in both lobbying and gaining often non-competed government grants and subsidies for hundreds of millions of dollars (see here and here as well), especially during the Obama administration.

The irony of that money being used to accuse Scott Pruitt of cronyism, for renting a room in Washington for $50 a night, can hardly be overstated.

But the political tendentiousness of the anti-Pruitt campaign is equally egregious.  The EIP is the extreme opposite of a public interest group.  It’s an “environmental-lobby gravy-train” group, with a determination to prevent Trump from doing what his voters elected him to do, by whatever means necessary.

We’ll let Mr. Armendariz do the talking about “crucifixions.”  But it’s fair to point out that he’s done it.

What started as a scandal over first class travel, the media’s focus on Scott Pruitt has morphed into an investigation of his personal living arrangements in D.C. that could end poorly for the Environmental Protection Agency (EPA) administrator.

Besides specious complaints about Pruitt’s travel costs – costs which pale to nothing compared to the oh-gee-whiz-looka-here findings about EPA spending and money-handling in the Obama years (and then there’s the golly-Moses stuff, and the we-probably-didn’t-need-that stuff, the what-were-they-thinking stuff, and the policy-related “burying ‘climate-program’ spending where Republicans will never find it” stuff, plus the “burying EPA errors by paying a contractor a whole lot to keep his mouth shut” stuff, and just the flat-out, full-frontal massive increases in EPA spending across the board that the voters never asked for stuff) – there is also now Rented-Room-gate.

The White House is already investigating Pruitt’s living arrangements after a slew of media reports indicated the former Oklahoma Attorney General rented a room from a D.C. power couple for $50 a night. There are already reports White House chief of staff John Kelly wanted to relieve Pruitt of duty. …

Pruitt’s two-bedroom unit in the Capitol Hill condo is partially owned by the wife of J. Steven Hart of the firm Williams & Jensen. Pruitt only paid for nights he used the room, paying a total of $6,100 for the roughly six months he lived there, Bloomberg reported.

EPA lawyers have said the arrangement isn’t an issue.

“As EPA career ethics officials stated in a memo, Administrator Pruitt’s housing arrangement for both himself and family was not a gift and the lease was consistent with federal ethics regulations,” EPA spokesman Jahan Wilcox said in a statement.

“He paid a fair price for what amounts to just a room,” Fugh told Bloomberg. “So I don’t even think that the fact that the house is owned by a person whose job is to be a lobbyist causes us concern.”

But why go with that boring assessment?

However, the Environmental Integrity Project, the group behind many of the stories on Pruitt’s travel, argued Pruitt’s paying $50 in rent may violate a ban on federal employees taking gifts valued at more than $20. The group Public Citizen asked EPA’s Office of Inspector General to investigate.

Paul Krugman has weighed in, for some reason:

NYT columnist Paul Krugman went as far as to argue Pruitt’s paying for a place to sleep constitutes a bribe.

Thinking some more about this Pruitt story. Kudos to Bloomberg for getting the facts; but I wish reporters wouldn’t lump de facto bribes from lobbyists with padded expense accounts, like unnecessary first-class travel. Corruption is a much bigger deal 1/ https://t.co/cVaDP3Oap4

Krugman, however, probably represents the extreme in this case. It’s not really clear how Pruitt’s paying for a room at a rate in the range of normal for that area of D.C. constitutes a bribe.

He plows through to the end:

The New York Times reported on Monday Pruitt rented the condo from Hart’s wife when EPA approved an environmental permit for a pipeline project by Enbridge, which hired Williams & Jensen.

Again, Pruitt critics argued that “[e]ven if no specific favors were asked for or granted, it can create an appearance of a conflict,” according to NYT.

“Entering into this arrangement causes a reasonable person to question the integrity of the E.P.A. decision,” Don Fox, former general counsel for the Office of Government Ethics under Obama and Bush, told NYT.

There just isn’t any there-there, is the problem.

However, lobbying disclosures presented by NYT don’t show Williams & Jensen actually lobbying EPA on behalf of clients. The firm said it did not intervene with EPA decisions for its clients.

At some point, Republicans are going to have to stand up to this canned, well-oiled shtick.  The point here is not Scott Pruitt, per se, although he doesn’t deserve this.  The point is that keeping control of the EPA agenda is essential. There are few things more important.  Trump can’t afford to just let this one go; the EPA is still backloaded to resume its attack on the U.S. economy, as soon as the Trump loyalist at the top is hounded out the door.