Sorry Meghan McCain But Trump’s Tweets Were Right; AND Your Dad Was A Political A-Hole! 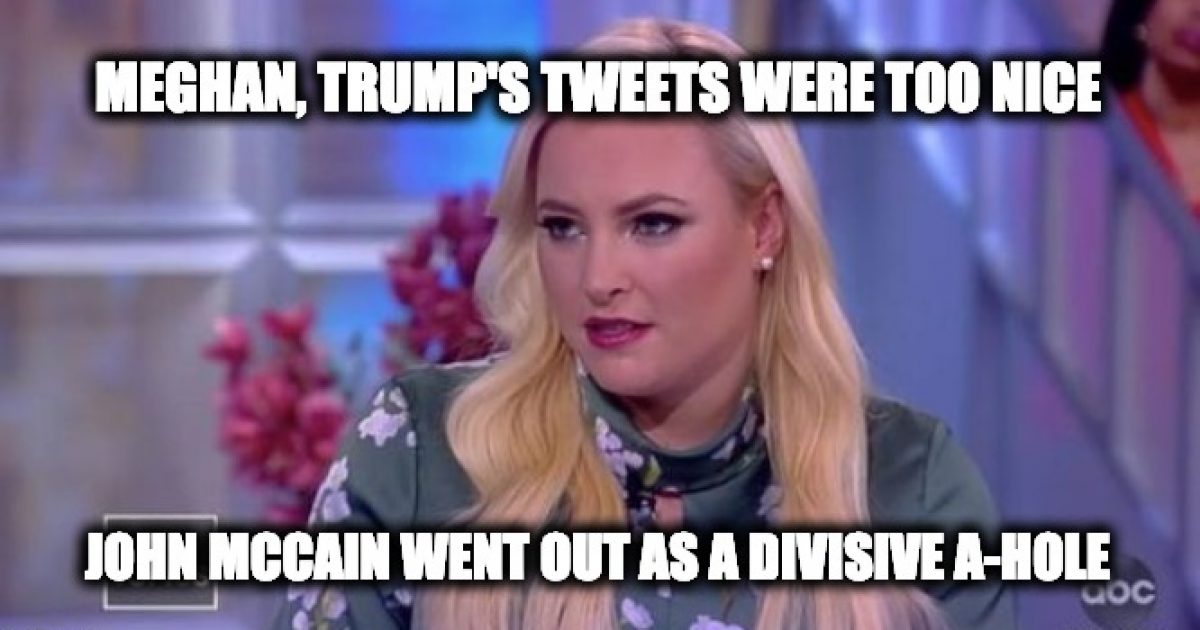 Meghan McCain attacked President Trump’s valid tweets about her late father who in his last years of life wasn’t great, he was divisive and a political a-hole.

It’s not surprising that Meghan McCain thinks her late dad had a halo and walked on water, to be honest, I look at my father the same way, but then again my dad never distributed a fake document that slandered a President out of personal animosity for the man in the oval office.  In the latest flareup of the McCain’s vs. President Trump feud, Trump is justified, and Meghan McCain is irrationally looking at the situation perhaps blinded by her love for her dad.

We have known for a long time that John McCain was the person who fed the fake dossier to the FBI setting this country on what so far has been a two-year-long attempt to overturn the 2016 election. But thanks to a  Kramer deposition for a lawsuit related to the dossier released by a Judge late last week we learned the involvement of McCain and his aide David Kaplan was more extensive than giving it to the FBI. We learned that Kramer, “spread the unsubstantiated anti-Trump material all over Washington during the presidential transition,” doing the bidding of the anti-Trump, anti-conservative Senator, who hated Trump so deeply he designed his own funeral to be a “crap on Trump session.” This was after McCain sent Kaplan to the U.K. to meet with Steele who told him that the information in the dossier “needed to be corroborated and verified

Needless to say, the latest revelation upset the target of the slander, President Trump. The POTUS tweeted a comment by Clinton Independent Counsel Ken Starr, who said McCain’s spreading of the dossier was a dark stain against him. Trump added a comment about McCain’s last minute change of mind that stuck America with Obamacare.

Personally, I believe the tweet that the President signed was too nice.

Spreading the fake and totally discredited Dossier “is unfortunately a very dark stain against John McCain.” Ken Starr, Former Independent Counsel. He had far worse “stains” than this, including thumbs down on repeal and replace after years of campaigning to repeal and replace!

“No one will ever love you the way they loved my father,” she wrote. “I wish I had been given more Saturday’s with him. Maybe spend yours with your family instead of on twitter obsessing over mine?”

No one will ever love you the way they loved my father…. I wish I had been given more Saturday’s with him. Maybe spend yours with your family instead of on twitter obsessing over mine? https://t.co/q7ezwmHiQ4

Uh-Meghan you are wrong. Your father was loved by some, but others like your’s truly blame him for a lousy-run 2008 presidential campaign where he refused to get aggressive and stuck America with eight years of Barack Obama, and the fact that repeal and replace failed, and now the dossier.

Meghan, your father, even lied to America about his dossier involvement. He told the Daily Caller on Oct. 18, 2017: “I gave it to no one except for the director of the FBI. I don’t know why you’re digging this up now.”  He was talking about Buzzfeed getting the Dossier. However, he was the one who sent Kaplan to meet with Steele. Are we really to believe that when Kaplan came home and started spreading the dossier info around (because Steele asked him), McCain didn’t know about it?

The President hit back:

So it was indeed (just proven in court papers) “last in his class” (Annapolis) John McCain that sent the Fake Dossier to the FBI and Media hoping to have it printed BEFORE the Election. He & the Dems, working together, failed (as usual). Even the Fake News refused this garbage!

NEW: Meghan McCain addresses President Trump's latest tweets attacking her late father, Sen. John McCain, on @TheView: "He spends his weekend obsessing over great men, because he knows it, and I know it and all of you know it, he will never be a great man" https://t.co/nT0wOnItZ9 pic.twitter.com/Z9ULYeIErL

Sorry, Meghan, your father was an American hero when he suffered through years of torture at the “Hanoi Hilton.” But as a Senator, he was a liar.  Like when he for reelection on building a wall but voted for the gang of eight bill that didn’t have a wall, or when he said he supported repeal and replace but was the vote that killed it, or even when he said that his only involvement with the dossier was giving it to the FBI.

John McCain trashed the President’s foreign policy when he went outside the country. McCain didn’t mention the president’s name when speaking at the Munich Security Conference in 2017. He just blasted what he saw as a shift in the United States and Europe away from the “universal values” that forged the Western alliance seven decades ago.  He added that he was aware there is “profound concern across Europe and the world that America is laying down the mantle of global leadership.”

It wasn’t just Trump, despite the fact she sacrificed her career and worked her butt off to get him elected President, McCain stabbed Sarah Palin in the back on his deathbed. In his book and HBO Special called “The Restless Wave,” McCain lamented that he shouldn’t have picked her as his V.P. She sacrificed for McCain and McCain went out by flipping the bird.

Sorry, Meghan McCain, but in his later years your father worked hard to divide the country, and at the end, he worked hard to handicap the peoples choice for President of the United States, Donald Trump. The only thing wrong with President Trump’s tweets about your father was he should have gone further in pointing out how John McCain’s massive ego dictated his divisiveness to the very end. When your dad asked that President Trump not attend his funeral so the speakers could trash the President, it. was a divisive and bush move.  Well, not a Bush move. Because when Bush #41 passed away, he wanted the President at his funeral despite the fact they had major disagreements. That’s because former POTUS George H.W. Bush had the class your father lacked.