BREAKING: McCain And Aide Worked With Steele To Spread Dossier All Around DC 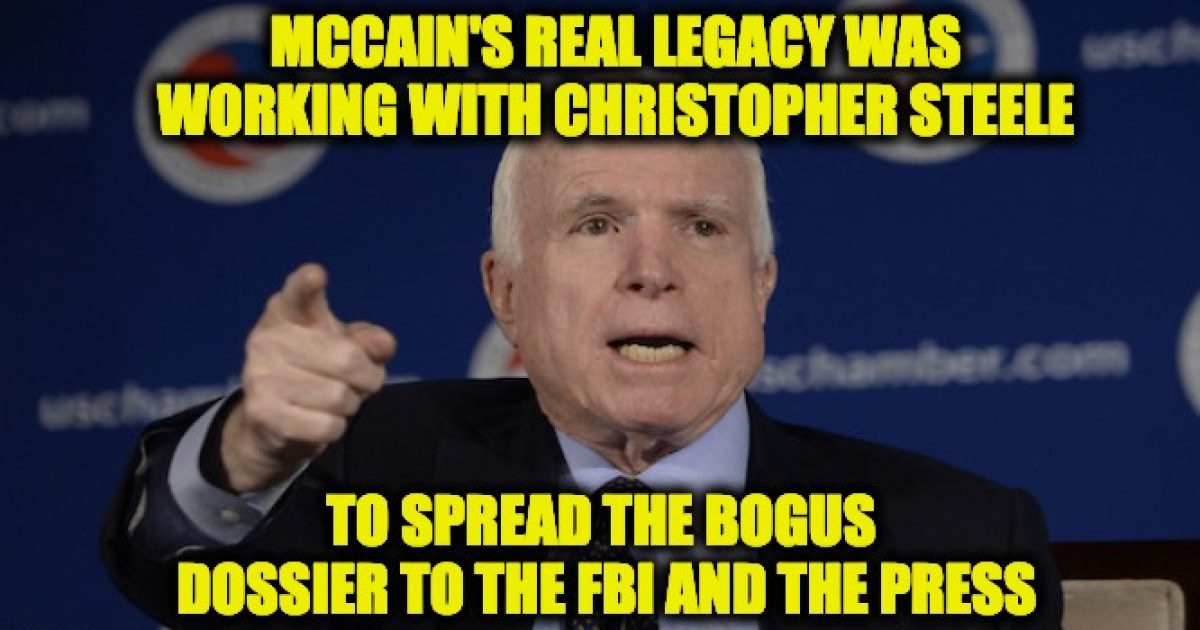 John McCain admitted to giving the Steele dossier to the FBI, and we already know that aide David Kramer gave it to Buzzfeed who published it. Now we learn that at the request of Christopher Steele they were behind leaking the dosseir to all the major media in D.C.

In a court transcript of Kramer’s testimony in a libel suit released on Thursday the 14th, we learn that Kramer “spread the unsubstantiated anti-Trump material all over Washington during the presidential transition,” doing the bidding of the anti-Trump, anti-conservative Senator, who designed his own funeral to be a “crap on Trump session.”

During the transition, the GOP began to unite behind the new President, but McCain steadfastly stood to the side, lobbing insults and accusations toward the Oval Office in an act of petty tantrum.  Some of the principals involved in that bogus Russian dossier sued for defamation and mentioned McCain in the suit, not necessarily for leaks, but because the failed 2008 presidential candidate was intimately involved in the scheme to smear The Donald.  “

“Now, two lawsuits — one in the United States and a second in the U.K. — are being brought by lawyers for Aleksej Gubarev, a Cyprus-based Internet entrepreneur whom Steele’s Russian sources accused of cyber spying against the Democratic Party leadership.

Kramer testified in a libel case brought against BuzzFeed by a Russian entrepreneur Aleksej Gubarev, a Cyprus-based Internet entrepreneur whom Steele’s Russian sources accused of cyber spying against the Democratic Party. Per Kramer’s testimony, In the deposition, Steele, and Fusion GPS founder Glenn Simpson sought to use him and McCain as conduits to pass the dossier to the FBI and to spread the dossier material all over Washington during the presidential transition. Kramer said he leaked the salacious material to the WSJ, WaPo’s Fred Hiatt, CNN’s tin foil hat wearing, long since over-the-hill Carl Bernstein, National Public Radio, McClatchy news service, and others, he said.

Per the Daily Caller,  Kramer said he also met Mother Jones’s David Corn, The Guardian’s Julian Borger, and Washington Post reporters Tom Hamburger and Rosalind Helderman. Kramer also noted that ABC News’s Brian Ross showed him a copy of some of Steele’s memos. His Kramer’s contact at McClatchy was Peter Stone, a reporter who worked on two debunked stories about former Trump attorney Michael Cohen that are based on allegations from Steele’s dossier.

But it was Buzzfeed who tricked him into giving up the entire dossier.

But his most momentous meeting was with Ken Bensinger of BuzzFeed. In Washington during the Christmas holidays, he let Mr. Bensinger read the dossier. He then stepped away.

“He said he wanted to read them, he asked me if he could take photos of them on his — I assume it was an iPhone,” Mr. Kramer said during a deposition “I asked him not to. He said he was a slow reader, he wanted to read it,” Mr. Kramer testified. “So I said, you know, I got a phone call to make, and I had to go to the bathroom so I’ll let you be because I don’t read well when people are looking at me breathing down my neck. And so I left him to read for 20, 30 minutes.”

“Were you aware that he had taken pictures?” an attorney asked.

“Not until January 10th,” he answered.

The FBI with the support of the mainstream media used the bogus dossier in their attempt to discredit Trump and overturn the results of the 2016 election.   McCain wasn’t accused of helping to create the dossier, but before he passed away, aided by Kramer, he made sure it would hurt the president. While Kramer didn’t mention McCain when talking about spreading the dossier to the press, as an aide to the Senator, he wouldn’t have leaked the information without the knowledge and approval of McCain. Kramer handled the press, McCain handled the FBI. This is another example of the cynicism of the late Arizona Senator, who should be remembered as the poster boy for term limits.

Ironically the speakers he selected for his funeral blasted President Trump, claiming he was divisive. However, the most divisive move by a politician since the election of 2016 was McCain and his employee David Kramer spreading the bogus Steele document. That should be his legacy.