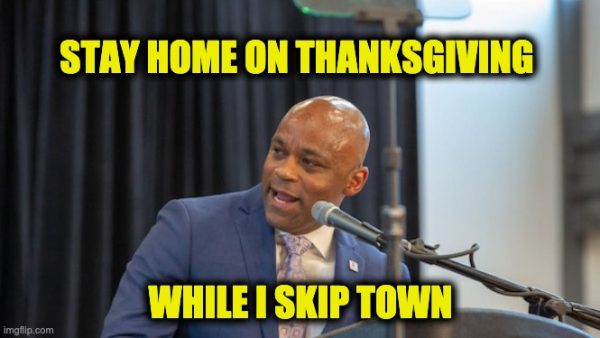 Pelosi and Newsom and Phil Murphy, oh my!  All have been caught doing things during the pandemic that they’ve cautioned the public against doing. That would be called hypocrisy – do as I say, not as I do. Now, another far-left politician has been busted in the act. Joining the liberal hypocrite club is Denver Mayor Michael Hancock. (I assume there is no relationship to Herbie or John), who urged Denver residents to stay home for Thanksgiving. A few hours later, he flew to Houston, Texas, for the Thanksgiving holiday.

He posted this the morning before Thanksgiving.

Pass the potatoes, not COVID.

?️Stay home as much as you can, especially if you're sick.
?Host virtual gatherings instead of in-person dinners.
❌Avoid travel, if you can.
?Order your holiday meal from a local eatery.
?Shop online with a small business for #BlackFriday. pic.twitter.com/acQpWs2Ism

Perhaps he should have worn a disguise when he went to the airport because people saw him.

After his hypocritical Houston trip was exposed, Mayor Hancock apologized:

Another do as I say not as I do politician apologizes for their hypocrisy.

In this case, Denver Mayor Michael Hancock who repeatedly urged Denverites not to travel for Thanksgiving but was caught flying off to Mississippi to see his wife and daughter. pic.twitter.com/6gsk4WXEjk

The mayor’s tweeted out statement included:

“I have shared how my family canceled our plans for our traditional multi-household Thanksgiving celebration,” Democratic Mayor Michael Hancock wrote on Twitter. “What I did not share, but should have, is that my wife and my daughter have been in Mississippi, where my daughter recently took a job. As the holiday approached, I decided it would be safer for me to travel to see them than to have two family members travel back to Denver.”

“I recognize that my decision has disappointed many who believe it would have been better to spend Thanksgiving alone,” he added. “As a public official, whose conduct is rightly scrutinized for the message it sends to others, I apologize to the residents of Denver who see my decision as conflicting with the guidance to stay at home for all but essential travel.”

Residents of Denver were not pleased.

May @MayorHancock’s turkey be tough, his greens be crunchy with grit, and his sweet potato pie rife with strings.

Perhaps you could have had an honest conversation with the citizens of Denver a week ago. Instead of a tweet on holiday eve; after your flight; and after media reports. Way too much of CYA.

Tracy and I will be spending the holiday alone…at home…as our elected leaders urged.

Denver mayor: This Denver school board is dysfunctional. I need to write a letter about it.

Also Denver mayor: Let me tweet that Denver residents need to stay home and not travel WHILE I'M AT THE AIRPORT. https://t.co/rLglSgaIYm

Hancock finished his tweeted apology with, ” I made my decision as a husband and father, and for those who are angry and disappointed, I humbly ask you to forgive decisions that are borne of my heart and not my head.” Nice words, but what he really meant was do what I say, not as I do.