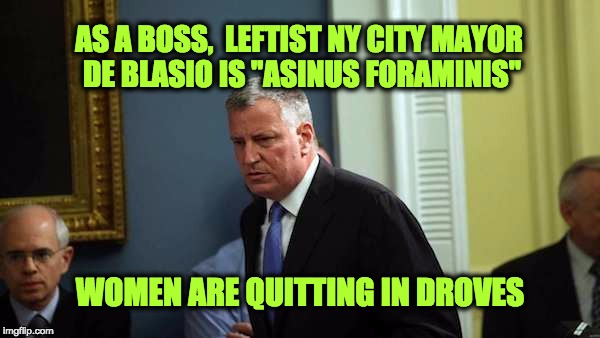 As we say in Brooklyn, wattayaknow,! Leftist NYC Mayor Bill de Blasio does not get a gold star when it comes to working with female employees. In fact women hate working for the Mayor so much, that they are quitting almost as fast as NYC residents are leaving the city to flee the oppressive taxes.  I know what you are thinking, the liberals always claim its the conservatives who are conducting a war on women, but that’s only because we want to protect female fetuses as well as their moms.  What should be concerning to the NYC er I mean , no he’s a Democrat are the reports that he will eventually seek a national office.

Scott Sloofman of America’s Rising PAC reports that  a devastating New York Times story has exposed that female employees in the Mayor’s office have also had a tough time dealing with him. Yes THAT New York Times. Many of those females leaving City Hall are minorities:

“But now, as he seeks re-election in November, Mr. de Blasio has seen a puzzling exodus of female talent. Thirty-one high-level officials hired by Mr. de Blasio have left City Hall since he took office in 2014. Of those, 22 were women, more than twice the number of men who left. The gender imbalance of the departures has raised questions as to why so many women, including many who are black or Hispanic, have jumped ship on a mayor seen as welcoming to women and minorities.”

Apparently de Blasio’s management style is a classic case of what is called in Latin “asinus foraminis” which is translated as donkey hole.  The may exhibits a “condescending tone” and habit of “berating or belittling subordinates” has precipitated this mass exodus:

“Another factor cited by some who frequently dealt with the mayor involved his personality; he often lectures his staff during meetings in what people describe as a condescending tone, and he is known for berating or belittling subordinates in front of others or shooting off emails criticizing them in brusque terms. Nearly everyone experiences this, the women said, but they suggested that women may have less patience.”

Apparently the environment in the Mayor’s office is constant nastiness toward women:

“But some found the work environment at City Hall directly hostile to women. ‘I just found it to be a totally inhospitable workplace,’ said Lindsay Scola, Mr. de Blasio’s former scheduler, who had previously worked with the former first lady, Michelle Obama, and the Energy Department. Ms. Scola and two other women recounted repeated instances where they felt they were marginalized or talked down to by a male colleague, because they were women. Ms. Scola said she was once told that her ‘job was to hold time on the Outlook calendar and nothing else, like I was a little girl.’”

This NYC Mayor’s office war on female employees is being waged with the full knowledge of the leftist mayor.

Now let us all pray the “asinus foraminis” Mayor of NYC runs for national office. That would be real fun (and a GOP win).