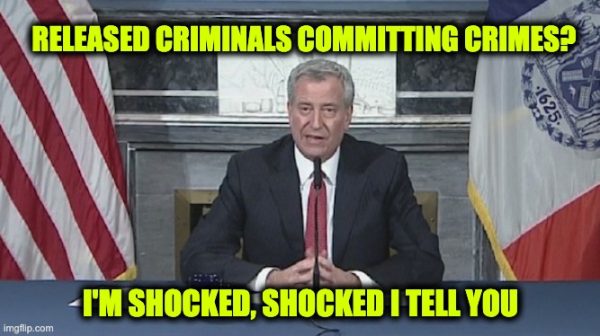 Move over Captain Obvious, NY Mayor de Blasio is the real Captain Oblivious. Too dense, apparently, to grasp even the simplest of connections.

Over the objections of many, de Blasio took it upon himself to release criminals from Rikers back into the general population… to protect them from Coronavirus.

But who was protecting the citizens of New York? Obviously, it sure wasn’t their Mayor.

It is “unconscionable” that Rikers Island inmates who were released due to coronavirus concerns are committing new crimes, Mayor Bill de Blasio said Monday.

“I think it’s unconscionable just on a human level that folks were shown mercy and this is what some of them have done,” the mayor said during his morning briefing Monday, which came on the heels of a Post report outlining the issue.

…More than 1,400 city inmates have been granted early releases due to concerns about the spread of coronavirus inside jailhouses, Hizzoner said.

The Post reported Sunday that at least 50 of the newly released Rikers Island prisoners were rearrested for new crimes in recent weeks — and in some cases were cut loose again. —NYPost

Unconscionable? He must have been one of the few New Yorkers who didn’t know these early released inmates wouldn’t commit another crime. Perhaps he is still taking those mind-altering drugs that made him believe he could actually become POTUS.

Seriously. How could he not see this coming from miles away?’

Rikers Island holds some of NYC’s worst, He couldn’t have seriously expeced convicted criminals to act upon some sense of reciprocal moral obligation, did he? DID he?

He really did, didn’t he?

Supposedly As of April 10, 304 inmates and 518 DOC staffers have tested positive for COVID-19. Nobody should get that disease especially the Department of Corrections staffers. If DeBlasio knew anything about managing he would have figured out a way of protecting the DOC employees AND prisoners.   Heck, most New Yorkers feel like we’ve been living in a prison for the past month and that’s to stay healthy. What did the mayor do to prevent COVID-19 from overtaking Rikers besides letting criminals back on the street?

How the Hell did that man ever get elected to anything, let alone Mayor of New York