What You May Not Know About Hanukkah 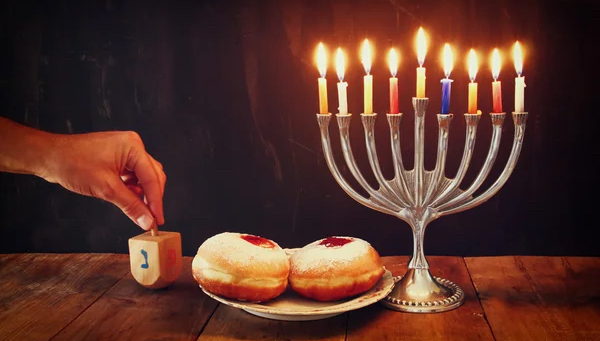 Facebook Twitter Flipboard
On December 16th at sundown, Jews worldwide lit a Shamash (the candle used to light the others), recited blessings, and used the Shamash to light the Hanukkah. With that action, Jews worldwide began celebrating the festival of Hanukkah.
Before we begin talking about Chanukah, you should know the meaning of the word Chanukah. Contrary to rumors, it does not mean, “Let’s come up with a holiday that has so many ways of spelling in English we can drive the Gentiles crazy. Truth be told, it drives Jews crazy, also. The Hebrew word Chanukah translates into English as the word dedication, referring to the rededication of the holy Temple in Jerusalem.

Most of the  Chanukah stories we are taught by parents and teachers and are rushed through on TV so they can treat it like part of Christmas leaves out the most essential and universal lessons of the festival.

Hanukkah celebrates the renewal of the Beit HaMikdash, the holy Temple atop Mount Moriah in Jerusalem after the Judeans beat the forces of Seleucid King Antiochus IV.

One part usually left out is Chanukkah also celebrates a victory in a Judean civil war. Those who maintained their faith triumphed over assimilated Hellenized Jews. 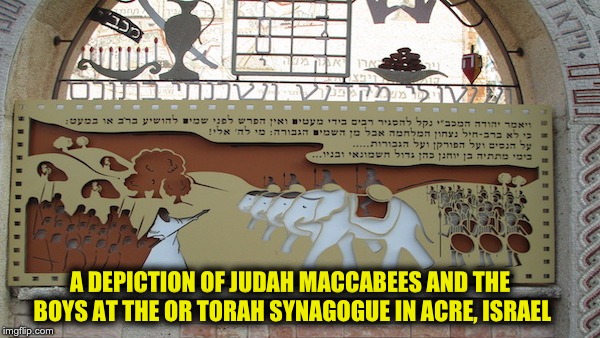 As far as Jewish holidays go, Hanukkah is not that important because it was created by Rabbis, just like Purim. The command to observe festivals such as Passover, Sukkot, or Shavuot came from God via the Torah. Since God outranks rabbis (although some rabbis don’t consider themselves outranked), the holidays in the Torah are considered much more important.

The standard view of the holiday includes the miracle of the one day’s worth of Kosher oil lighting the Holy Temple’s menorah and lasting for eight days, the Maccabees’ defeat of the superior forces of King Antiochus IV, the rededication of the Temple in Jerusalem, etc.

When an order to arrest Mattathias was issued, he ran into the wilderness to hide. Mattathias was joined by his sons and others who heeded this call, “Let everyone who has a zeal for the Law and who stands by the covenant follow me.

In the wilderness, the team came together. They picked up the nickname Maccabee. That wasn’t their last name (neither was Schwartz). Maccabee began as a nickname for Mattathias’ son Judah and spread to the other fighters. The word is an anagram for a Hebrew phrase that translates into “Who is like You among the heavenly powers, oh God?”

Two hundred years after the end of the war, a failed Judean General who became a Roman historian named Josephus wrote:

“The king being thereto disposed beforehand, complied with them, and came upon the Jews with a great army, and took their city [Jerusalem] by force, and slew a great multitude of those that favored Ptolemy [Egyptian King], and sent out his soldiers to plunder them without mercy. He also spoiled the Temple and stopped the constant practice of offering a daily sacrifice of expiation for three years and six months.”

Tomb of Mattathias ben Yoḥanan HakKohen, The Man Who Started The Revolt Son of Jonathan, The Priest, and Father of the Maccabees

Once they booted the Seleucid army back to Syria, The Chanukah holiday started. Well, it wasn’t really a celebration of Chanukah. It was a celebration of Sukkot. When the Maccabees finally retook the Temple in the month of Kislev, they decided to celebrate Sukkot three months late  The war had stopped the Judeans from observing Sukkot. Therefore, the Maccabees rededicated the Temple and immediately set out to observe the skipped festival, which was an excuse to get the population to re-dedicate themselves to their faith.

During Biblical times, on Sukkot and all the God-directed festivals, Judeans from all over the land would come to Jerusalem and offer sacrifices at the Temple. The festival’s late celebration allowed the Jews who couldn’t go to the holy Temple for three and a half years an opportunity to rededicate themselves to the Jewish faith.

The Temple’s rededication was also celebrated, now called Hanukkah. It was initially named The Festival of Lights (which can only be spelled one way in English), but that name was made for a different reason than one may think.

“Now Judas celebrated the festival of the restoration of the sacrifices of the temple for eight days, and omitted no sort of pleasures thereon, but he feasted them upon very rich and splendid sacrifices, and he honored God and delighted them by hymns and psalms.”

“Nay, they were so very glad at the revival of their customs when, after a long time of intermission, they unexpectedly had regained the freedom of their worship that they made it a law for their posterity that they should keep a festival, on account of the restoration of their temple worship, for eight days. And from that time to this, we celebrate this festival and call it Lights.”

There is no record of the Judeans making potato latkes or eating greasy delicious sufganiyot (puffy, greasy donuts). That didn’t become Jewish practice until much later. The reason for eating the greasy, oily food is in recognition of the miracle of eight days of oil (and the fact that they taste good).

To put it differently, the reason the Jews are called the chosen people does not mean the Jews are better than other nations. It means we were chosen for the responsibility of spreading the light of God throughout the world.  In a way, the Jews are our creator’s flashlights.

The primary miracle of Hanukkah is the victory of the Jews over superior forces thanks to help from God. That’s one of the lessons of the holiday. God’s miracles aren’t always “showy miracles,” such as parting the Reed Sea or stopping the sun in the middle of the sky. You know, the kind of miracles that make you say, “Wow!  Now THAT was a miracle, and the big guy upstairs made it happen.”

Faith is all about believing God is always involved, even when you don’t see him kicking King Antiochus’ soldiers out on their butts, or the creation of Israel in 1948, Israel winning the Six-Day-War, and most recently, the miracle of the NY Jets winning Superbowl III. Actually, he does a miracle every day.  When you wake up every morning to have your coffee and shmear, the universe God created in six days is still there. Now THAT’S a miracle. 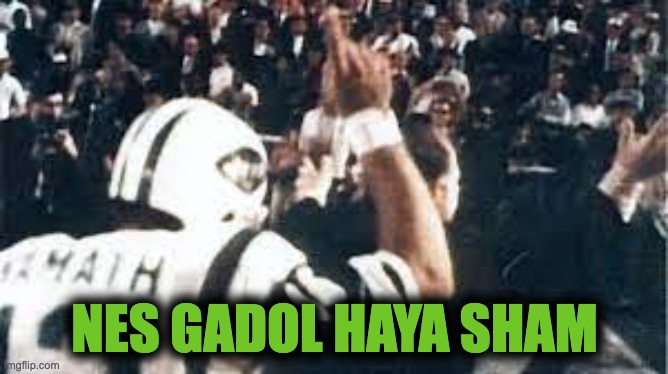 The Rabbis tell us that we cannot use the Chanukah candles for reading or seeing the same way we could do with a Shabbos candle. he chanukiah lit on Hanukkah is supposed to be placed near a window. That way, the light of God will shine outward into the world. The light of the Shabbos candles does not have to be near a window, and we can use it to help us read the sports section of our favorite newspaper. That’s because we light Shabbos candles for a totally different reason, to bring the light of God into the house.

Each of the eight nights, we light the chanukiah. It’s not called a menorah. The only real menorah was in the Temple in Jerusalem. When fully lit, the menorah has seven candles (six plus the Shamash). On the last day of Hanukkah, we light nine candles on the chanukiah when the  Shamash is included.

There’s an interesting story in the Talmud about lighting Hanukkah candles. The students of two great rabbis, Hillel and Shammai, were having a debate about how to light the candles.

The Shammai students said on the first night, light nine candles (the Shamash and one for each of the eight nights) and take away one each succeeding night.

The house of Hillel said to light. two the first night (the Shamash candle plus one) and add one each subsequent night. While both camps were brilliant and wise, the Hillel camp won (as they usually did). The reason is that it’s crucial to increase holiness every day. Adding a candle increases holiness.

Even though Chanukah is a minor holiday, it is one of my favorites, not because of the eight days of gifts (an American custom based on trying to one-up Christmas) and not because of the greasy clogged artery-inducing donuts and potato pancakes. Chanukah is a holiday about Jews fighting against assimilation. That lesson is just as important today as it was in the days of the Maccabees. To be a modern Maccabee and fight assimilation (with your words) and ensure your entire family connects with God’s light. who knows? ff enough Jews do that, the Jets might win another Superbowl. And as a long-suffering Jets fan, that will be a major miracle.

Sadly, while Chanukah is about Jews fighting against forced assimilation, some ACLU Woke types would have us celebrate it by putting “menorahs’ into nativity scenes or putting Stars of David atop Christmas trees in the town square. his proves they have no understanding of the meaning of the holiday. ere’s a message to Gentiles who are trying too hard to be nice and recognize a Jewish holiday. Christmas lovely holiday and we hope you have a joyous holiday. But please don’t merge it with a holiday about fighting assimilation. That defeats one of the reasons we celebrate the Chanukah holiday,

Most importantly, may everyone have a Chag Chanukah Samayach, a happy Hanukkah holiday, and now that it’s been rededicated, may all Jews achieve the dream we’ve had for 1,800 years, a return to our eternal home. And to my Christian friends, may you have a joyous Christmas filled with love from family and friends,

The Lid Needs Your HELP! gular readers know that with the usual political fare usually filling the pages of The Lid, I write about issues affecting Israel. M “signature” on those posts talks about Herut, a Zionist movement that I feel so strongly about that I volunteer much of my free time to help in any way I can.

You can help me help Herut in a few ways;