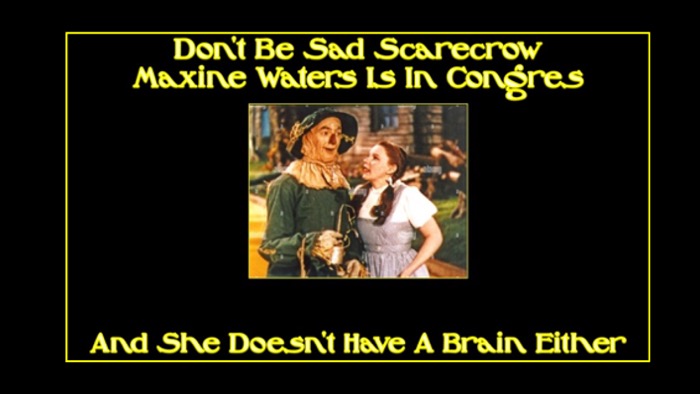 Wow, talk about the teapot calling the kettle black. Rep. Maxine Waters (D-CA) branded Marjorie Taylor Greene (R-GA) an “Extremist Radical” who has “no business” in the House after the congresswoman was permanently banned from Twitter.

Speaking on MSNBC’s PoliticsNation with the professional hater Al Sharpton on Sunday, the senior Democrat lashed out at Republican Greene, calling her “dangerous.”

Per Newsweek, Rep. Waters told the Rev. who doesn’t believe in ALL ten commandments.

“Let me just say this, when you talk about congresswoman Greene, you’re talking about the kind of extremist radical that is now in the House of Representatives who is basically, you know, dangerous.

Regular readers know that this site is not a fan of Rep.Marjorie Taylor Greene. Last week, we posted about many of her crazy comments and concluded that she is nuttier than a porta-potty on the last day of a peanut convention.

However, if there is any member who doesn’t belong in Congress Mad-Maxine Waters.

She constantly calls for violence, riling up her liberal base, even suggesting that her followers seek out conservatives and publicly shame them.

“Let’s make sure we show up wherever we have to show up. And if you see anybody from that Cabinet in a restaurant, in a department store, at a gasoline station, you get out and you create a crowd. And you push back on them. And you tell them they’re not welcome anymore, anywhere….The people are going to turn on them. They’re going to protest. They’re going to absolutely harass them until they decide that they’re going to tell the President, ‘No, I can’t hang with you”

In the spring of 2021, the hate monger showed up at a protest in Brooklyn and was asked about the Derek Chauvin murder trial in Minneapolis:

Many of her congressional colleagues made negative comments over those words. Here’s one example.

Why is a sitting member of Congress encouraging protesters to get “confrontational?” https://t.co/Biwg69iYG1

Mad Maxine has made comments that were much worse than Marjorie Taylor Greene. If anyone doesn’t belong in Congress, it is the Rep from California. And Rep Waters is more than calling for violence and divisiveness. Rep Waters used her position to enrich her husband’s bank and put campaign funds in her daughter’s pocket in a separate case.

In the case of her husband’s bank, Waters was cleared of ethics violations because she blamed her grandson. for the incident. What kind of Grandma throws their grandchild under the bus to protect her arse,

The Rep from Georgia defiantly says some really stupid things. But her accuser on the left coast is worse, plus she has been caught taking actions that reek of corruption. It is not up to Maxine to decide who belongs in the House of Representatives, that call should be made by the voters.