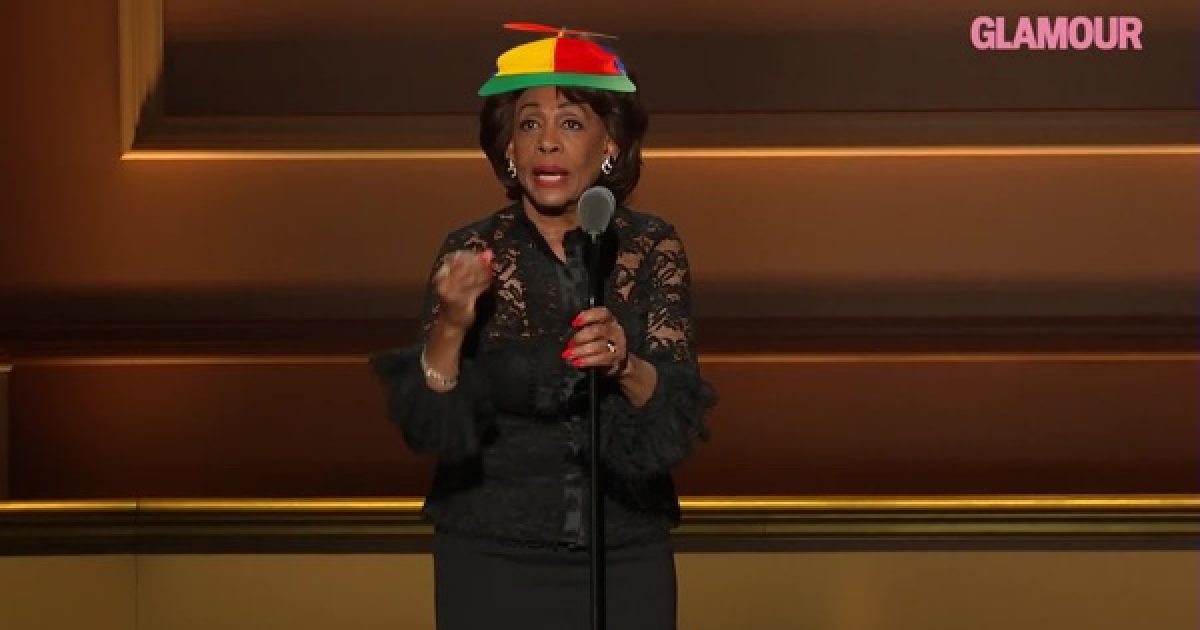 Maxine Waters (D-CA) has been routinely labeled one of the most corrupt politicians in Congress, she’s routinely found her sanity being questioned for the things she has said, and she routinely finds herself way out of the mainstream when spouting her political opinions.

But today’s left doesn’t care about any of this.

“Because Trump,” has become the answer to almost every question asked of Democrats and the media left these days. The President gets blamed for everything, even the things that his opponents are doing. This behavior has allowed Maxine Waters to reinvent herself from insane and corrupt, to a leftwing leader.

So it shouldn’t surprise us that this past week, left-leaning women’s magazine Glamour, chose to honor Waters with the “Woman of the Year Lifetime Achievement” award. (I know, it’s crazy.) One of the other honorees was pro-Sharia, anti-Semitic, anti-American Linda Sarsour.

While Waters has “reinvented” herself in her old age, she hasn’t been able to stop the crazy from spilling out.

Listen to what she had to say to the gathered crowd at the awards show, and then listen to their response.

I am so pleased to see the interest and concern you are showing at what is happening at the highest levels of government. I see you and I hear you. And I encourage you not only to vote, to register, to get involved. But I want you to organize. I want you to join progressive organizations. I want you to seek out opportunities to serve on boards. And I want you to do everything that you can to get ready to run for office.

And for those who say to me, ‘You are asking for something too soon and too early, be careful, don’t jeopardize yourself, don’t say what you’re saying right now but I’ll continue to say, ‘Impeach him!’ Impeach him! Impeach him!”

The crowd responded with wild applause before Waters let out a final shrill yell, shouting “Impeach 45!”

Then things got really weird as Waters and the crowd began chanting the message back and forth at each other.

While this is the typical sort of crazy that we’ve come to expect from Maxine Waters, it should be instructive about the insanity pervading the left these days.

The Glamour crowd is as unhinged as Waters is, and just like Waters, I’d bet none of them could give an actual reason for impeaching the President.

Things are getting crazy folks, and while the ride has been pretty bumpy so far, everyone should expect things to get even more turbulent in the coming days.