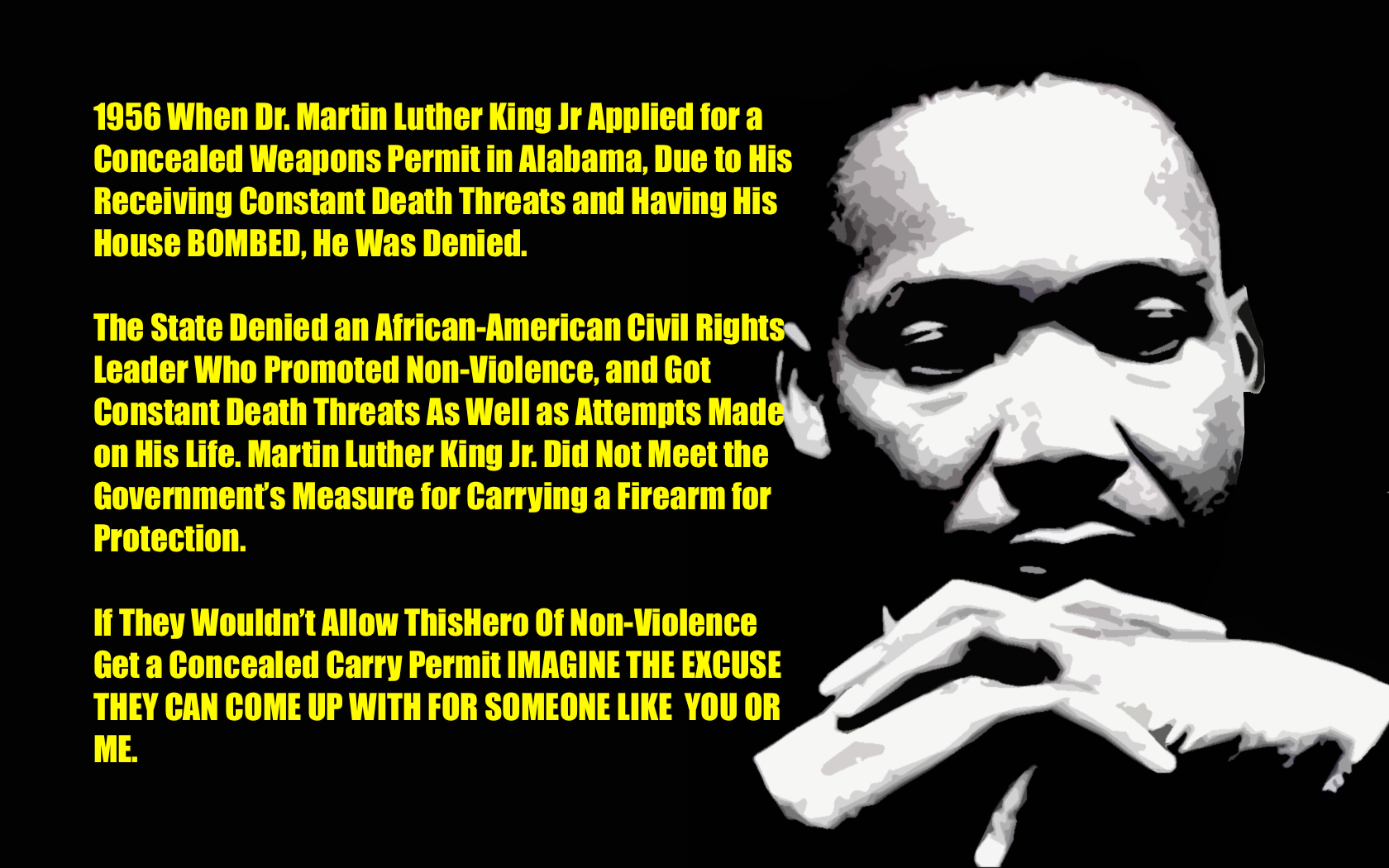 The basis for gun control has always been racist in nature.  It started in the South to ensure that freed slaves wouldn’t be allowed to defend themselves.

It has expanded over the years to encompass a larger range of goals such as controlling the populace at large and centralizing power within the government; can’t have those uppity peons thinking they are citizens after all.

So it should come as no surprise that in 1956 when Dr. Martin Luther King Jr applied for a concealed weapons permit in Alabama, due to his receiving constant death threats and having his house BOMBED, he was denied.

If a man like Dr. King wasn’t “worthy” to be given a concealed weapons permit then I submit that as proof that any notion of needing to ask the government for permission before exercising a right is flawed.  If a civil rights leader who promotes non-violence and is a national figure who gets death threats constantly and has attempts made on his life does not meet the measure of gaining a CCW in a state that can arbitrarily deny him his right to keep and bear arms then the states themselves should have no say in it.

This is what oppression looks like.  This is tyranny.  This is also a successful application of gun control.

This is gun control working.  It kept guns out of the hands of a man the government wanted disarmed.  Since Dr. King wasn’t a criminal he did not illegally carry a gun.  Let gun control activists crow about  how the world is safer because Dr. King was disarmed.  That’s all gun control CAN do…disarm the law abiding; the criminals just don’t care because THEY’RE CRIMINALS and will carry anyways.

And if you think that it is incongruent for a man of peace and non violence to carry a gun it’s not.  It’s naive to think that a man who preaches non-violence must in turn be a sacrificial lamb for any racist who wants to do him and his family harm.

So in the end, Martin Luther King Jr, a black Republican pastor who preached non violence and who had quantifiable reasons to be allowed to carry concealed was denied a permit because the government said he didn’t DESERVE that right.

Another life to add to the growing number of innocent people who gun control has had a hand in killing.

You want to fight racism?  Fight gun control.  Every free man and women should be allowed to defend themselves and their families from threats and oppression; it’s been 151 years since the emancipation proclamation…isn’t it about time that all people were allowed to exercise their rights freely regardless of the color of their skin?
Cross-posted from Bulletsfirst