Constitutional Scholar/Attorney/Host Mark Levin: There is NO Birthright Citizenship 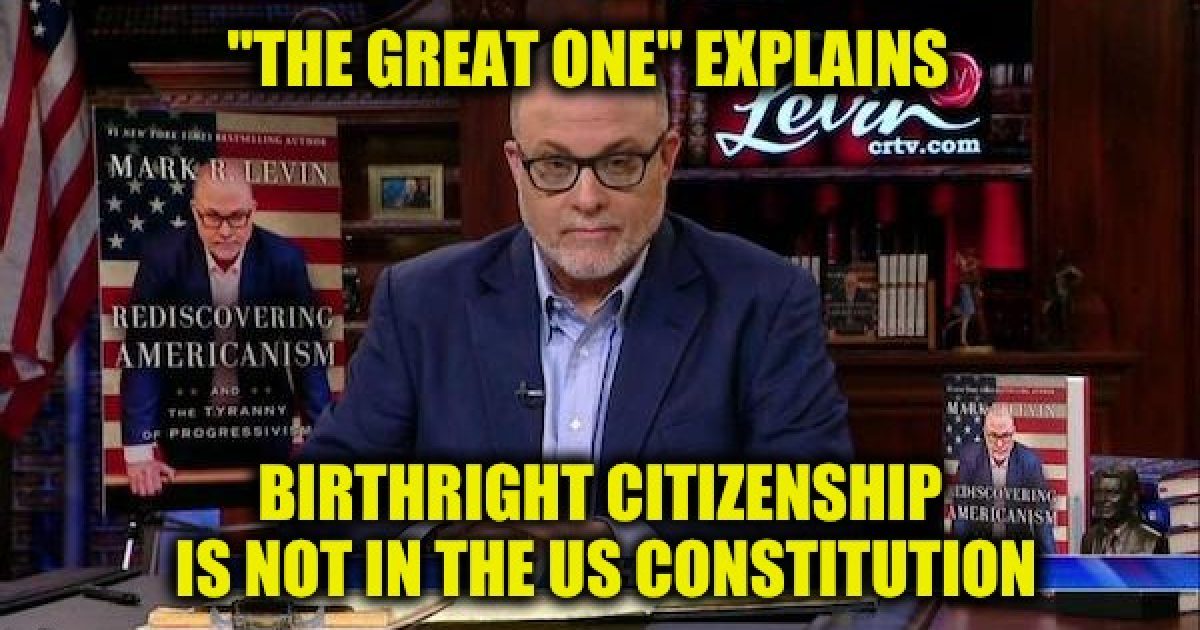 Mark Levin is more than a talk radio star, he is a successful attorney who was the chief of staff to President Reagan Attorney General Edwin Meese and a Constitutional scholar who has written six books (by my count) on Constitutional issues. Levin explains that the 14th Amendment to the Constitution does not grant birthright citizenship on anyone born inside our borders. He argues that says there is no such constitutional rule.

Article 1 Section 8 of the Constitution which lays out the powers of Congress says.

Levin addressed the issue on his October 30 broadcast where he lit into Ryan for his absurd characterization of the law.

If I may add to Levin, IMHO if the framers gave the responsibility to Congress (both houses) they wanted naturalization rules to be the result of a discussion between the States (before the 17th Amendment required a direct election of senators), they were beholden to the state governments who put them in office,  and the American people (the House with short terms and direct votes were the part of government most responsive to the will of the people). NOWHERE does the constitution says that the executive or the courts have that power. Well unless it’s in the free healthcare/redistribution of income section which I can’t find in my copy of the Constitution.

Levin also explained how those who crafted the original amendment felt about what they were doing with the 14th Amendment:

“‘This will not of course include persons born in the United States who are foreigners, aliens … but will include every other class of persons. It settles the great question of citizenship.’ … Is it not plain English? Is he not as clear as can be that it does not include aliens, it does not include foreigners. … The republican basis for citizenship is consent! Consent of the country! You can’t self-immigrate. You can’t claim jurisdiction because you happen to walk into the United States.”

“What is the bottom line here? Let’s number this: They wanted to make certain that former slaves would be treated as citizens of the United States, because certain states were still resistant. … They exempted Indians, because Indians still, certainly back then, were often considered citizens of particular tribes. But these actually were very forward-looking individuals. They specifically excluded aliens and foreigners.”

Three years ago, “the Great One” spoke about the same issue with Sean Hannity on FNC. Levin told Hannity that the 14th Amendment does not give citizenship to children of illegal immigrants who are born in the US.

The radio talker said that those claiming that the Constitution allows birthright citizenship are dead wrong. Levin said that Article 1 Section 8 of the Constitution grants absolute power to Congress to establish a uniform rule of naturalization.

Levin went on to explain that means that only Congress — not a president or the courts — has the power to regulate immigration.

“Of course Trump is right and Cruz is right and Sessions is right. They’re all right,” Levin said of those claiming then that birthright citizenship does not exist.

“If you want a policy of open borders, that anybody born here should become a United States citizen, you amend the Constitution,” Levin said. “We don’t have to amend the Constitution. It says what we say it says. By statute, going forward, prospectively, Congress can in fact say … ‘No, you cannot make children of illegal aliens American citizens automatically.’”

Below is a video of that interview, it’s well worth watching: