He Puts The Gas In Gaslighting 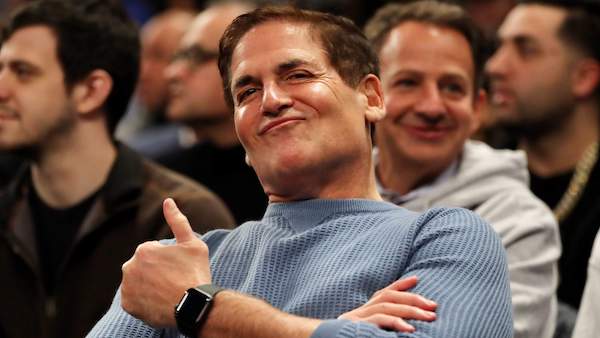 Cuban has certainly been carrying water for Joe Biden–or at least, for Joe Biden’s policies, which amounts to the same thing. He hasn’t taken a knee–yet–in support of the rioters who are so upset about the death of George Floyd that they’ve been torching the businesses of people who had nothing to do with it.

But he did say Biden has “empathy” for them.

As opposed to his “playing the victim” billionaire bete noir–President Trump. Who has had the audacity to side with the victims…of the rioters, whom the president hasn’t confused with the peaceful protestors.

He told CNBC’s Karen Gilchrist that the price of health insurance “could be slashed by 50 percent” by doing away with private health insurance, which is based on individual risk profiles and can be tailored to the individual’s needs. He talked up the British and Australian one-size-for-all models. And he didn’t talk up the cost of the taxes imposed to provide one-size-fits-all coverage in Britain and Australia. Instead of paying $1,000 for an MRI–if you ever need one–you’re forced to pay several times that sum every year, in taxes–in case someone else needs one.

Rand were she still with us, would not be glad to have Mark Cuban as a fan.

It gets even weirder.

Cuban says he “wants to be a Republican”…but endorsed Hillary Clinton. Which is not unlike confusing rioters with protestors.

Cuban may be to the left of sleepy Joe – who for all his many faults doesn’t seem to actually hate this country. One wonders about Mark Cuban. About his motives for financing the jihadi-recruiting film, Redacted–which is basically Deliverance revisited only this time in place of leering hillbillies assaulting Ned Beatty and Jon Voight, it’s American soldiers assaulting and ultimately murdering an Iraqi teenager.

As awful as that act was, worse is the certainty that it will expose Americans to more terrorism, very much in the manner of the “protests” that Mark Cuban has so much . . . empathy for.

He also has an affinity for cheap because off-the-radar labor–something else he has in common with another ersatz Republican who always seems comes to come up on the Democrat side of things…Michael Bloomberg.

He thinks it’s “crazy” as well as “really, really stupid” to reserve jobs in America for Americans–the citizens who pay the taxes that fund, among other things, sports arenas such as the one built-in Dallas where Cuban’s Mavericks play ball, which has helped make Cuban rich.

But Cuban–and Bloomberg, who founded something called the New American Economy, which advocates that Americans shouldn’t have pride of place in the economy of America–is opposed to checking the “immigration status” of workers. He is as cognitively dissonant–or is it disingenuous?–on this issue as he is on the issue of being a “Republican” who supports Hillary Clinton…and a fan of Ayn Rand who supports collectivized health care.

A piece in the Dallas Morning News describes the conflation…

“Almost half of Fortune 500 companies were started by immigrants or the children of immigrants, according to a 2017 study by the Center for American Entrepreneurship, a nonpartisan policy and advocacy organization.”

Because of the missing illegal in front of “immigrants.”

If Cuban were honest, he’d put it that way. Instead, he tries to shame opponents of open borders – and open wallets – by calling them “crazy” and “stupid.”

It’s typical of the gaslighting practiced by the left, of which Cuban is a part – his posturings about being a “Republican” (and a Randian) notwithstanding.

But it’s more than just disingenuous posturing. It may also be practical politics.

Cuban knows his presidential ambitions aren’t going anywhere in a Republican Party led by a victorious President Trump. So he’s lining up with the other party – and the man he hopes will defeat President Trump.

And who – just maybe – will make him the number two? Not likely. Or Treasury Secretary?

The bottom line is, to my friends and clients on TV, beware of Cuban’s bearing gifts. Do not trust enemies who smile eerily on your cable news shows–they could very well be playing a trick.