Marianne Williamson: Liberals Are ‘Mean’ And Lie, ‘I Thought The Right Did That’ 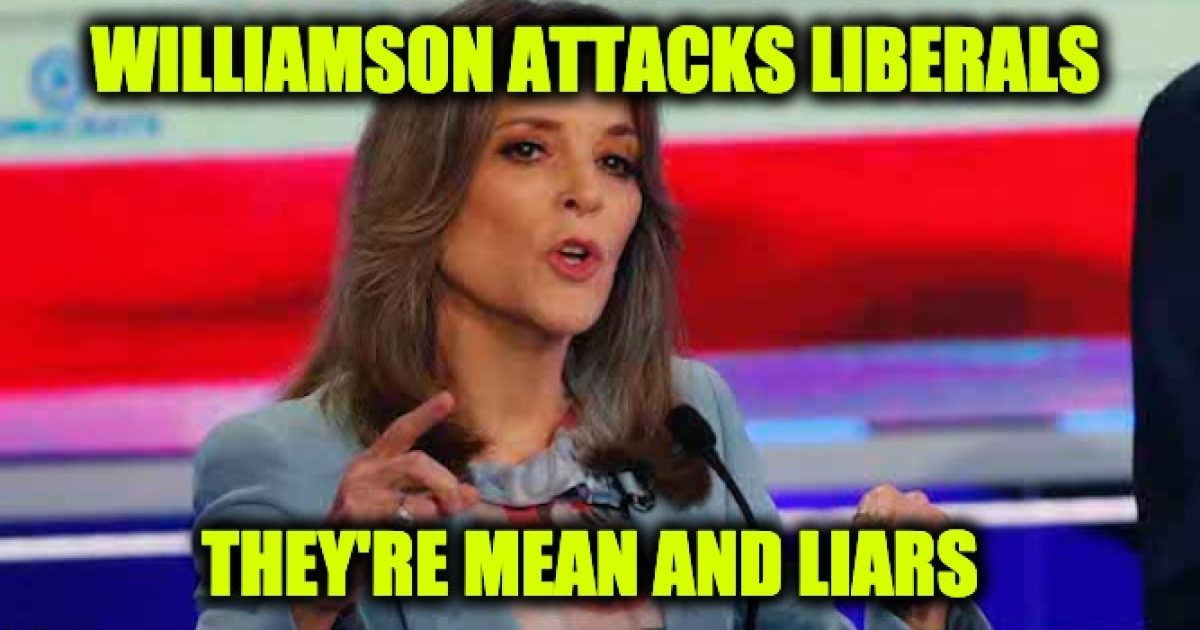 Maybe that’s what she meant by yada-yada-yada. During the last debate, the Democratic candidate Marianne Williamson said so many Americans believe yada-yada-yada. In an interview with David Remnick of The New Yorker, she said “I know this sounds naïve,” Williamson said. “I didn’t think the left was so mean. I didn’t think the left lied like this. I thought the right did that, I thought we were better.”

Exactly  Marianne, because the left is so mean they’ve taught many people to believe the way you did, that the right is like that–yada-yada-yada

The worst aspects of human character have been harnessed for political purposes,” she tells David Remnick. Williamson sees herself as a kind of spiritual counter to Trump, reshaping our moral trajectory. And she does have policies, which include repealing the 2017 tax cut and an ambitious plan for slavery reparations, and also tapping some surprising people for her Cabinet

One of those people was supposed to be the NY Times’ Nicholas Kristof…well until he said he couldn’t stand her:

Williamson said “the haters in this country have been collectivized for political purpose” and added that liberal New York Times columnist Nicholas Kristof would have been her ideal secretary of state before he condemned her candidacy.

“But then I read that he can’t stand me, so he probably wouldn’t want to work for me,” Williamson said.

The spiritual author-turned-presidential hopeful has called for a “Department of Peace” to spur peace initiatives domestically and abroad. Williamson also fought back when she was criticized this week after a reporter tweeted a screenshot of her appearing to attribute Hurricane Dorian’s changed path to the “creative use of the power of the mind.”

“Millions of us seeing Dorian turn away from land is not a wacky idea,” she said in a now-deleted tweet. “It is a creative use of the power of the mind. Two minutes prayer, visualization, meditation for those in the way of the storm.”

If she used the creative power of the mind to change the hurricane’s path, why didn’t she have it go out to sea without hitting any land? She could have saved at least twenty lives in the Bahamas. Did she try to save them? Maybe she was prevented by some dark psychic force.

Williamson also wanted to assure America that she is not an Anti-Vaxxer. She told Remnick she apologized for her earlier remarks on the subject. She added that she’s not a medical skeptic insisting that never told anyone to replace medicine with love and has never told anyone to be more loving as a means of defeating disease.  “I’m Jewish,” she said, “I go to the doctor.” No Marianne if you are Jewish you are supposed to be the doctor (or a lawyer). If you are neither, you disappointed your parents. Although they might be proud of the fact that you are not mean like the other liberals.