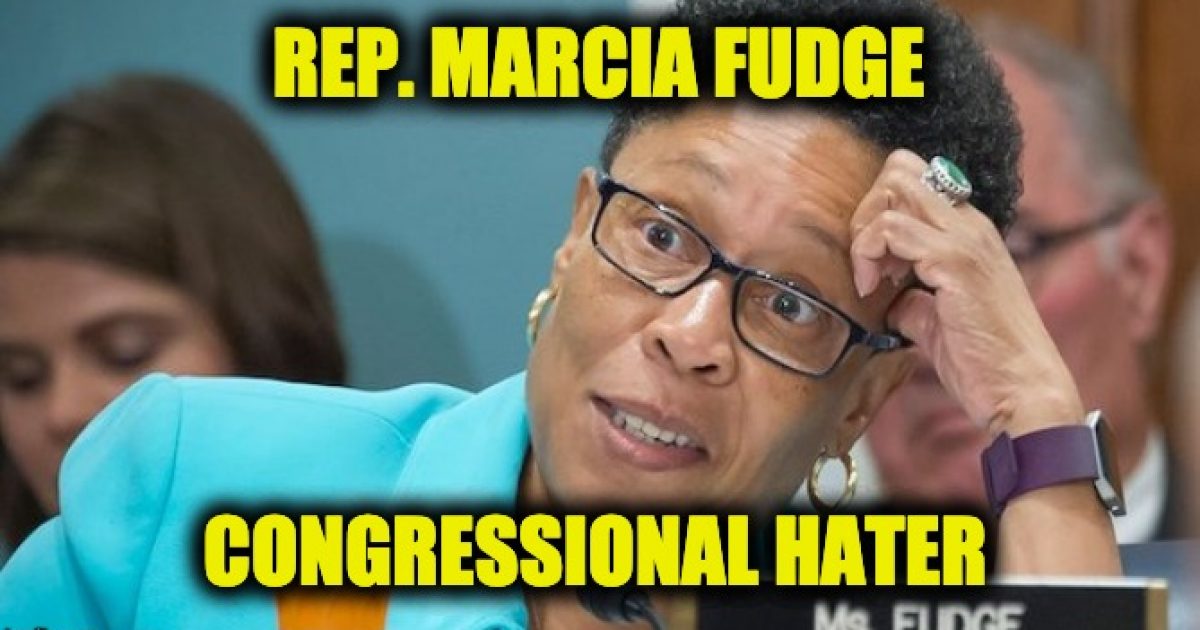 As we and others have opined in recent months, Democrats and their liberal allies in the media and in Hollywood have demonstrated their absolute hatred for average Americans who have a different political point of view.  While speaking from the floor of the House of Representatives on Tuesday, Rep. Marcia Fudge, D-Ohio, did her bit to foment hate and possible violence against Trump supporters by reading a constituent letter calling Trump supporters dumb, ignorant racists.

Moreover, the letter she read questioned the patriotism of those who support the president.

“It is glaringly apparent that many who support the president’s administration are either racists, steeped in religious beliefs, ignorant, or as my mother used to say, just plain dumb,’ ” she said. Fudge was reading the letter from Rev. Ronald S. Williams, a man identified by the Washington Post as the “senior pastor and chief executive of Mount Zion Fellowship in Highland Hills, Ohio.”

“I believe the crooked ascension of Trump to the Oval Office is a gauge that measures the declining patriotic and moral values of the many citizens of America,” she added.

Translation: Everyone who supports President Trump is a dumb, ignorant, unpatriotic, and immoral racist.

Additionally, the letter Fudge read called the Republican Party a Trump cult and Democrats are apparently not being violent enough in their opposition.

“My growing concern is that the Congress and Senate of the United States have more of a personal interest for themselves rather than a patriotic duty to the people they represent,” she said. “The Republicans appear to have become a Trump cult, and the Democrats refuse to move against this man in a collected, decisive way.”

Maybe Fudge would prefer pistols at 20 paces or perhaps an actual armed conflict between Democrats and Republicans.

Not surprisingly, she also called for an impeachment inquiry, Cleveland.com said.

Here’s the video of the Orwellian “five-minute hate,” as posted to Twitter by Fudge.  And keep in mind, the person who reportedly wrote this is allegedly a “Christian” pastor:

During today’s Special Morning Hour, I shared a letter from an OH-11 constituent concerning the current administration. Watch the video to view the full floor speech. pic.twitter.com/D3yx7lDECP

Rep. Marc Veasey, a Democrat from Texas, was presiding over the House at the time, and apparently didn’t care too much for Fudge’s words.

“The chair will remind members that remarks and debate may not engage in personalities toward the president, including by repeating remarks made elsewhere that would be improper if spoken in the member’s own words,” Veasey said.

“I hope that this was a lapse in judgment from Rep. Fudge,” Timken said in a statement. “This kind of language serves only to divide not unite – her constituents deserve more. But this goes to show that Democrats care more about playing identity politics than they do about winning back blue-dog Democrats who overwhelmingly supported the president.”

This wasn’t just a “lapse in judgment.”  This was Marcia Fudge reading a letter that obviously expressed her own personal views about those who support the president.

Trump’s reelection campaign also responded, reminding supporters of the insults hurled at them by Hillary Clinton, the party’s 2016 candidate who denigrated half the country as irredeemable racist deplorables not even worth thinking about.

Democrats didn’t learn their lesson from Hillary’s huge loss. They are still insulting millions of Americans, this time from the floor of the House of Representatives. It seems all Democrats are offering the country is more hate and hoaxes! pic.twitter.com/GSzelpPhs9

Others weighed in on the social media platform.  This writer, who took extreme exception to her public display of hatred, noted:

Doing your part to foment hate and violence. What’s next? A call for a second bloody civil war?

This would have to improve to be despicable. Thanks for proving my assertion that liberalism, at its core, is an ideology of insane rage and hate.

Racist bigot Fudge. What a moron.

#Hate is so disgusting. You shown America who you truly are…a Racebaiter that trashed over 56 million American citizens personally. #Resign pic.twitter.com/eijmG7Xggk

What an embarrassment! Bravo D-11, is this the best you’ve got?

It sure seems that way.

Quite a few tweets were “unavailable,” but there was this dig at the so-called “pastor” who wrote the letter.

Ronald S. Williams is a senior pastor of name-calling

We agree.  Better yet, she should be beaten so soundly in her next election that she never even considers running for office again.  Maybe she could secure a spot for herself at CNN or MSNBC, the official network of insane liberal hate.

On a final note, Fudge isn’t the only radical Democrat to question the patriotism of Trump supporters from the House floor, as we reported here.  Yes, America, Democrats truly HATE you.  Let that sink in.