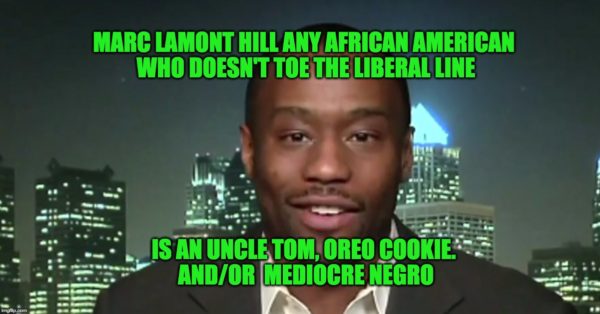 This is what Morehouse College Professor and CNN Commentator Marc Lamont Hill said on Monday’s “CNN Tonight.” Hill, a professor of the fake discipline called “African American Studies,” was once again seen on CNN accusing Donald Trump of being a “racist.” But he also engaged in that long practice indulged by the black left of Uncle Toming other blacks who won’t toe the liberal line.

During the show Hill decided that any black person who has the temerity to meet with the President-Elect should be labeled a “mediocre negro,” essentially labeling any black he doesn’t like an inconsequential person, Breitbart News reported.

Hill’s name calling started when CNN host Don Lemon reminded the panel that black comedian Steve Harvey recently visited Trump in New York. During his comments on Harvey’s visit with Trump Hill decided that Harvey was one of “a bunch of mediocre negroes being dragged in front of TV as a photo-op for Donald Trump’s exploitative campaign against black people.”

Also during a discussion with the panel led by Lemon, Hill went after Bruce LeVell, a representative of President-Elect’s diversity team.

Hill began his “argument” with this:

I love Steve Harvey and I have respect for Steve Harvey and I think his intentions were accurate — or appropriate rather, but my disagreement is the way in which he’s being used by folk like Donald Trump. Again, his intention is just to have a seat at the table. But when you’re at the table, you should have experts at the table. You should have people who can challenge the president at the table. … Because all — because they keep bringing up comedians and actors and athletes to represent black interests is demeaning, it’s disrespectful, and it’s condescending. Bring some people up there with some expertise Donald Trump, don’t just bring up people to entertain.

After LeVell called Hill on the fact that he wasn’t in the meeting with Trump and Harvey and didn’t know what they talked about, Hill said it didn’t matter if he was there or not. Hill dismissed Harvey because the actor isn’t a “policy analyst” and then said Harvey is just another one of “the people [Trump is] trumpeting up and putting in front of the cameras.”

Then Hill noted that the black Americans visiting with Trump are just a “bunch of mediocre negroes being dragged in front of TV as a photo-op for Donald Trump’s exploitative campaign against black people.”

Unbelievably, after he named called he insisted he wasn’t name calling.

After the show Hill continued his attack on blacks he deems insufficiently black. Apparently Hill was feeling the heat after his TV stunt because he ran to Twitter to attempt to paper over his ignorant comment. On Twitter Hill insisted he wasn’t calling Harvey a “mediocre negro.”

I didn’t call Jim Brown mediocre. Nor Steve Harvey. Neither are. I specifically referred to the Trump Diversity Council. Neither are on it. https://t.co/b9dQYEss2E

I didn’t call Jim Brown mediocre. Nor Steve Harvey. Neither are. I specifically referred to the Trump Diversity Council. Neither are on it. https://t.co/b9dQYEss2E

But he did still want to attack Dr. Ben Carson as mediocre negro…

Carson is a mediocre choice for HUD. as a human, he’s extraordinary. https://t.co/7AK7nDlcv2

No one really believes his backpedaling, though. It’s one of those “who you gonna believe, me or your lying ears” deals, really.

One person who was completely incensed by Hill’s Uncle Toming of Steve Harvey was Milwaukee County Sheriff David A. Clarke.

Clarke put out a tweet of his own slamming Hill as a “jigaboo.” (Don’t get mad at me, I’m just reporting the facts, here…)

I am tired of this jigaboo telling black people who they should be, what they should do. He’s a lackey for Democrats https://t.co/XRI5bEPo0F

Booker T was talking about Marc Lamont Hill. If race relations get back on track after Obama re-opened the wound, Hill becomes irrelevant. pic.twitter.com/7B6kc09aMU

“There is a certain class of race-problem solvers who don’t want the patient to get well,” the Washington quote reads. “Because as long as the disease holds out they have not only an easy means of making a living, but also an easy medium through which to make themselves prominent before the public.

For those who may not know, Booker T. Washington essentially represented the logical, pro-American, more intelligent side of the black intelligentsia at the turn of the last century. As the 1900s dawned Washington argued that education, hard work, and self-reliance was the only way for the black man in America to shed the slave’s yoke and to take his place beside the white man as an equal. His famous autobiography was entitled “Up From Slavery,” with all the meaning that title implies.

On the other hand, his nemesis in the black intelligentsia was W. E. B. Du Bois, a man who maintained that blacks can never be the equal of white men in the American system because the U.S.A. is permanently racist and all whites hate blacks. He argued that the only way for blacks to get ahead is by coopting government and our system of education.

I think you already know who won and who lost that fight.

During Washington’s day and on until Lyndon Johnson’s Great Society, blacks had strong families, low crime, few out of wedlock births, and were steadily gaining in education and the middle class. After Du Bois’ ideas won the day… well we all know how bad off the black community is in America today because of Du Bois’ victory among the liberal elite.