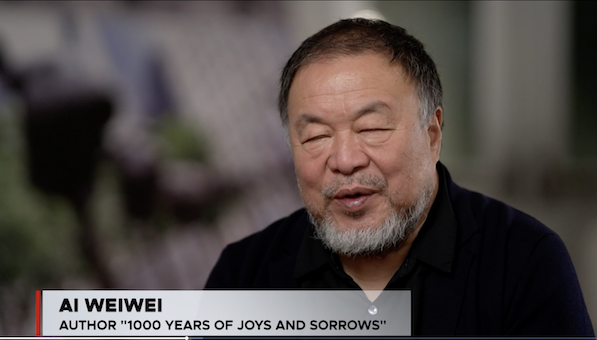 The one narrative that excites Democrats more than calling Republicans bigots is calling them a threat to Democracy. This time, that excitement backfired. Ai Weiwei, an activist, artist, and former political prisoner in China, has first-hand experience with the brutality of an authoritarian regime.

He was invited onto Firing Line to discuss his book, 1000 Years of Joys and Sorrows, which includes this paragraph in its description.

Once an intimate of Mao Zedong, Ai Weiwei’s father was branded a rightist during the Cultural Revolution, and he and his family were banished to a desolate place known as “Little Siberia,” where Ai Qing was sentenced to hard labor cleaning public toilets. Ai Weiwei recounts his childhood in exile, and his difficult decision to leave his family to study art in America, where he befriended Allen Ginsberg and was inspired by Andy Warhol. With candor and wit, he details his return to China and his rise from artistic unknown to art world superstar and international human rights activist—and how his work has been shaped by living under a totalitarian regime.

In preparing for this interview, Margaret Hoover came across a reference to a Trump tweet that she was unable to resist. It led her to ask Ai Weiwei directly if he saw the former President as an authoritarian.

If she was hoping to have her guest help her take a swipe at Trump, she was sadly mistaken, instead, he knocked the intolerant left.

When asked if Trump was an authoritarian Ai Weiwei said:

“In many ways, you are already in the authoritarian state. You just don’t know it . Certainly the United States, with today’s condition, you can easily have an authoritarian.”

He implied that Trump couldn’t be an authoritarian because

“If you are authoritarian, you have to have a system supporting you. You cannot just be an authoritarian by yourself.

“Many things happening today in U.S. can be compared to the Cultural Revolution in China. Like people trying to be unified in a certain political correctness. That is very dangerous”

It’s very philosophical. With today’s technology, we know so much more than we really understand. The information become jammed. But we don’t really — and really have the knowledge, because you don’t work. You don’t — You don’t have to act on anything. You just think you’re purified by certain ideas that you agree with it. That is posing dangers to society, to an extreme divided society.”

PBS hosted an expert on authoritative regimes to bash Trump.

He had a different insight.

Little did she realize that she was lobbing him a softball question that would be an absolutely devastating indictment of how the Democrats have been conducting themselves and using the power that they now hold.

Somewhere out there, Trump is laughing at her.

Even with his Twitter account shut down, his tweets are STILL finding a way to own the Libs.

You gotta hand it to him, that’s a whole other level of trolling.