Dan Bongino on Mandatory Mask Order: ‘Shove It Right Up Your A**’ 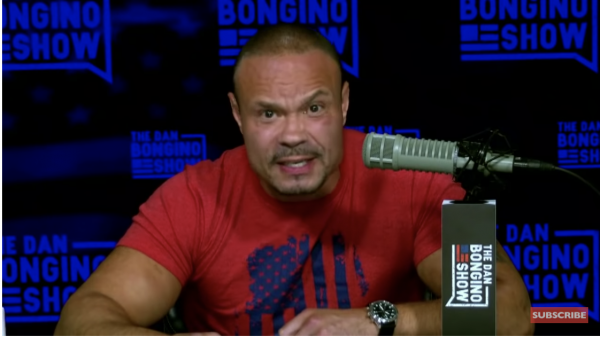 Former Secret Service agent and current Fox News contributor and a personal favorite of mine-especially when he goes on an angry truth-filled rant. Dan Bongino is telling officials in his county that they can take their mandatory mask order and shove it. Except, he used slightly more colorful terminology.

Bongino made the comments during his radio show on Wednesday after Commissioners in Martin County, Florida, voted unanimously to impose the mask mandate on residents.

“You can take your mask mandate and shove it right up your ass,” he defiantly announced.

Bongino went on to explain that he has no issue with complying with private businesses who request their patrons wear masks, while also expressing that he would do so to protect others in other situations where distancing is not possible.

But it’s the government power grab he has a problem with.

“I do not need power-drunk pseudo monarchs, little mini tyrants in my supposedly conservative county sending out ridiculous childlike amateur hour edicts demanding people wear masks in situations where the risk of transmission is somewhat close to zero,” he fumed. “You can take your mask mandate and shove it right up your ass, you understand? Because I will not comply.”

The so-called “Republicans” in my formerly conservative county voted to muzzle everyone. These buffoons are everywhere. Name them and shame them. https://t.co/EbIjcJWY8a

On social media, Bongino blasted the Commissioners as “so-called Republicans” and “buffoons” for voting in the mask mandate.

“If we fold and bend the knee to these government-wide ridiculous edicts like wearing a mask on a 100-degree beach in the middle of Martin County then what’s next, a mandate to eat broccoli?” he facetiously asked.

That would be awful…I HATE Broccoli.

“They have no authority to do this,” he added. “These people are just fabricating new tyrannical powers drunk on their own power.”

Republicans in Bongino’s county are siding with others who drunk on power … like nasty Nancy Pelosi:

Pelosi: “Oh, definitely long overdue for [a mask mandate]. And my understanding, that the Centers for Disease Control has recommended the use of masks, but not to demand—require it, because they don’t want to offend the president.” pic.twitter.com/02JFIhIpa3

Martin County officials unanimously passed the new mandate despite hours of public commentary, which leaned mostly toward residents’ opposition according to WPTV.

One woman reportedly compared the order to “a controlling boyfriend telling me what to wear.”

Bongino has previously warned that Americans could engage in civil unrest if federal, state, and local governments continue to strip them of their freedom in response to the coronavirus pandemic.

The mandate imposes non-criminal infractions, doling out increasing fines with each offense. Making it nothing more than a tax on residents–something liberals like to do–adding more proof to Bongino’s point.