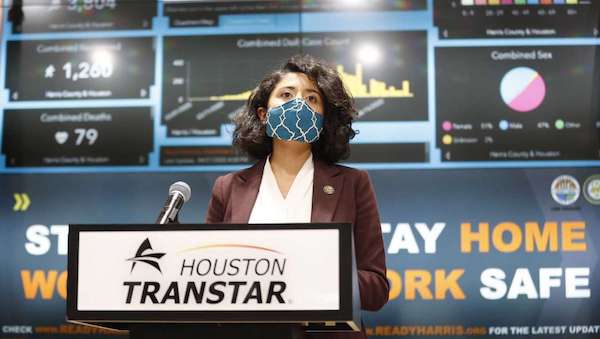 “County Judge” Lina Hidalgo of Harris County, Texas, (a Democrat) announced a mandate that every person over the age of 10 wear a mask in public or be faced with a $1,000 fine and 180 days in jail. It follows an order in Laredo and Willacy County, which also requires everyone to wear one or face a $1000 fine.  The Houston Police Union pushed back to say they don’t have the personnel to enforce such a Draconian measure. (A county judge, in this case, is a county official, not a judge on the bench who makes rulings.)

Other members of the Houston city council disagreed with the new policy:

On the same day they are moving to close $60M hospital because it wasn’t needed @LinaHidalgoTX orders mandatory masks in Harris Cnty — the ultimate government overreach. These kind of confused government policies fuel public anger — and rightfully so. https://t.co/TLgeG1TVFc

Should guidelines for masks in confined spaces be emphatically promoted? Absolutely.

Do not let commonsense guidelines lead to unjust tyranny.https://t.co/VZDceCHha6

The Houston Police Union pushed back hard, saying they were stretched too thin to enforce such a “draconian order.”

“Everyone should be wearing a mask in public, I wear 1 everyday. But making not wearing 1 punishable by law, and asking our officers to enforce it, will do irreparable damage to our relationship with the community. We are already stretched too thin without having to enforce this…” Joe Gamaldi, President, HPOU

“HPOU response to @LinaHidalgoTX draconian mask order: Now we want to be very clear, HPOU believes everyone should be wearing a mask in public, in order to protect themselves from the virus and we are encouraging all of our officers to wear a mask. However, we draw the line…” Houston Police Officer’s Union

Making the wearing of a mask punishable by a fine and jail time that police would have to enforce is going way too far. With homicides up 35% since the beginning of the year in Houston, they simply can’t waste time enforcing the mandate.  And Mr. Gamaldi is correct, it would drastically destroy their relationship to the public… which is already suffering from the lockdown.

The new “law” that she “mandated” comes as Texas Governor Greg Abbott has been working with state officials to reopen the Texas economy.

“The rights we enjoy under the Texas Constitution are being trampled on by Judge Hidalgo, while millions of individuals have lost their jobs and thousands of businesses are on the brink of bankruptcy,” Dr. Steven Hotze’s petition to the Harris County District Court reads. “If Judge Hidalgo’s Order is not declared unconstitutional and void, once this virus passes, the rights we are afforded under the Texas Constitution will forever be damaged.”

The suit claims Hidalgo has exceeded her authority by implementing orders more restrictive than those of Gov. Greg Abbott, which take precedence. It also claims that the Disaster Act limits Hidalgo’s powers to those explicitly outlined in the statute, which “does not contain any language forcing private citizens to wear masks, wash their hands, refrain from touching their face, or stay six feet away from another under the threat of fines.”

Hopefully, the Judge (the courtroom type) will rule in favor of Constitutional rights.