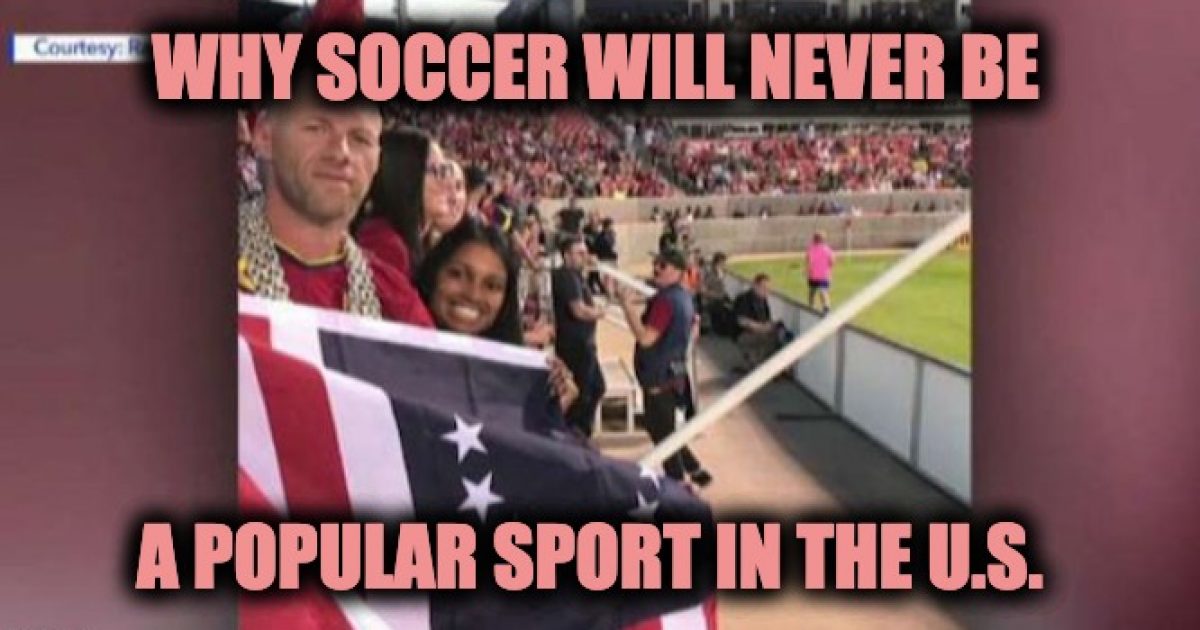 Major League Soccer took an unpatriotic stand against one of America’s national symbol. They announced a ban on the Revolutionary War era Betsy Ross flag. Perhaps their lack of patriotism is one of the reasons why Soccer will never be a major sport in the United States.

Early this week, America’s premier soccer league, Major League declared the red, white, and blue Betsy Ross flag a “symbol of hate” and banned a couple in Utah from waving it at games. Just as surprising is that people in America paid good money to go see a soccer game.

A married Utah couple who were in attendance at a Major League Soccer Real Salt Lake game says they were told by stadium officials to put away their Betsy Ross flag because the original flag of the American Revolution is a “symbol of hate.”

According to Randolf and Diana Scott, the league now claims that the flag, one of America’s earliest national banners, has been adopted by “hate groups” and so the flag represents hate, according to Fox News.

The pair turned up recently at Rio Tinto Stadium in Sandy, Utah, outfitted in their favorite jerseys and team colors and waving their Betsy Ross Flag. “Diana bought it for me actually, because my other flag was kind of old and falling apart,” Randolf told Fox.

But the couple says that stadium personnel soon approached them and demanded that they hide their early version of the Stars and Stripes.

“They kept telling us if he wasn’t going to take it down, we were going to be ejected from the game,” Diana exclaimed.

“He asked me — he’s like, ‘So what’s the purpose of the flag?’” Randolf said of the stadium official. “I was like, ‘Well, ’cause we love America.’”

The league admitted to Fox that any “controversial” banner is banned from stadiums.

“Recently, and very controversially as well as surprising to us, the Colonial flag has been adopted as a symbol for hate groups,” Real Salt Lake Chief Business Officer Andy Carroll told Fox. “Any controversial flags or other similar banners or signs with symbols of hatred, divisiveness and/or intolerance whether intentional or otherwise will not be permitted in our stadiums. Period.”

Ultimately, Randolf said that the characterization of the Betsy Ross flag as a banner of hate is absurd.

“When people see me or Diana with this flag, I hope they can understand that it’s about the freedoms we have here in America,” Randolf told Fox, “the legacy that America has.”

Below is a video report of the incident: