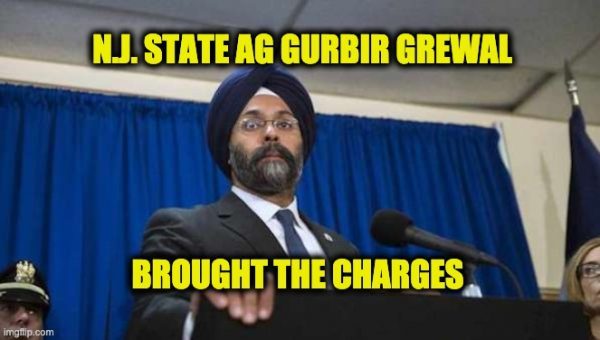 Democrats, the mainstream media, and Hollywood at-large continue to push for mail-in voting in the 2020 general elections. The reason why is simple. Mail-in ballots make election fraud easy. In Paterson, New Jersey, a city councilman, a councilman-elect, and two of their buddies just got caught with the hands in the mail-in ballot cookie jar. mail-in ballot voter fraud

Gee, if they were found in the trunk of a car, people would have thought it was a Minnesota Senate election, and the results were about the same as that Frankin-Coleman election. Long-time council member William McKoy lost by 245 votes to challenger the now criminally charged Alex Mendez.

Per the Attorney General’s press release:

Today’s charges send a clear message: if you try to tamper with an election in New Jersey, we will find you and we will hold you accountable,” said Attorney General Grewal. “We will not allow a small number of criminals to undermine the public’s confidence in our democratic process.

(…) It is alleged that Mendez violated state election laws as a candidate by approaching one or more voters in Paterson in the district where he was running and collecting their official mail-in ballots for delivery to the Passaic County Board of Elections.  It is further alleged that these mail-in ballots were delivered to the Board of Elections without information identifying the bearer in violation of state election laws. In addition, Mendez allegedly procured or submitted one or more voter registration applications, which he knew to be false, fictitious, or fraudulent, in that he knew the person for whom the application was procured was not eligible to vote in the election district identified on the application.

It is alleged that Jackson violated state election laws as a candidate by approaching one or more voters in Paterson in the district where he was running and collecting their official mail-in ballots for delivery to the Passaic County Board of Elections.  It is further alleged that these mail-in ballots were delivered to the Board of Elections without information identifying the bearer, in violation of state election laws.  In addition, Jackson allegedly procured and had in his possession more than three official mail-in ballots which were neither his own ballots nor ballots for which he was identified as an authorized bearer.  Lastly, Jackson allegedly received the official mail-in ballot of one voter without the ballot having been voted or sealed, and that ballot was subsequently delivered to the Board of Elections in a sealed envelope without information identifying the bearer.

It’s hard to understand how there can be charges. Doesn’t AG Grewal know that the Democrats and their sycophants in the MSM swear that election fraud doesn’t happen?

A Passaic County spokesman said 16,747 vote-by-mail ballots were received, but the county’s official results page shows 13,557 votes were counted — a difference of 3,190 votes. Those thousands of ballots not counted would represent nearly one in five of all votes cast, or 19 percent.

The Board of Elections previously announced about 800 votes would be set aside and not counted amid charges they were found improperly bundled in mailboxes in Paterson as well as at a drop box in nearby Haledon.

The spokesman later told the Paterson Press that the additional 2,390 disqualifications were due to the election board comparing signatures on the ballots to those previously on file for voters, and the new ones not matching up. The spokesman also would not explain the breakdown of what ward those ballots were from, or which candidates were voted for in those disqualified ballots

The Paterson Press also reports that four wards had more votes go uncounted than the winner’s margin of victory — meaning the uncounted ballots possibly could have tipped the election in favor of one of the candidates. When (and if), the election is certified, look for a court challenge.