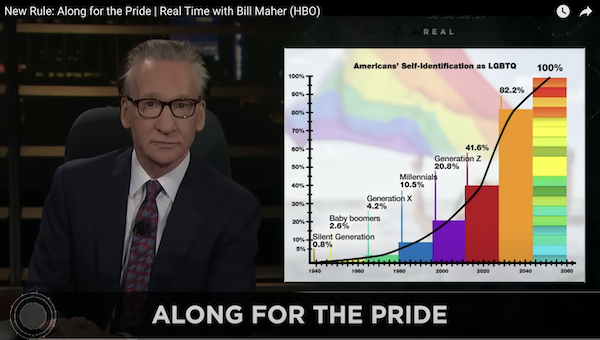 Bill Maher may not be a friend of the right — he openly hoped for a recession so that Trump would not be re-elected — but he’s getting awfully good at pissing off the Authoritarian left.

Whatever our many differences with Maher might be, we’re here for the pissing off the Authoritarian left.

Right at the top of the pack, in that authoritarian left at the moment, are the Rainbow lobby people.

Bill put on a clinic in his use of comedy and ridicule to say the unsayable in our present Emporer’s New Clothes dystopia. We would do well to pay attention not only to the points he made but how he framed them. Whether he realizes it or not, it followed the same pattern Augustine used in arguing for the faith of pagan Rome in his Magnum Opus, ‘City of God’.

After looking at the trendline of how the percentage of people not fitting into ordinary gender categories has jumped rapidly through the last few generations, quipping that in another 30 years, everyone will be gay, and asking a serious question disguised as a joke, he got into the substance of his monologue. When things change this fast, we’re allowed to ask, ‘what’s up with that.

He began with a point of agreement with his liberal audience. In this case, the defense of abortion against ‘those’ people. (That would be us.) Then he used light humor to make fun of a position widely held by whoever has been making the related talking points in the news cycle.

(What he says next makes more sense in the context of a liberal speaking to liberals while operating under their shared moral assumptions. He is clearly not speaking to a conservative audience.)

He called out the ACLU for their list of who would be ‘most harmed’ by the impending changes to Roe V Wade. He noted wryly who was not even mentioned on that list — women. He poked fun at the absurdity of the ACLU thinking gay people might have an urgent need for abortions. Because, definitionally, Bill isn’t afraid to point out that only one kind of sexual pairing actually results in children.

He presents himself as an ally of the rights of the particular interest group while also telling them to dial it back. ‘Not everything’s about you.’

That’s when his monologue goes gloves-off, and touches all the third rails we’re not supposed to address on this issue.

He hits
– the oppressor/oppressed, shut up you don’t get to have an opinion mentality
– puberty blockers on children
– Sweden and Finland no longer permit them
– amounts to experimenting on children
– medical side effects like bone density, infertility, no orgasm
– MEDICAL decision, not LIFESTYLE one
– weighing tradeoffs isn’t bigotry
– ACLU lawyer anti-civil-liberties in blocking ‘Irreversible Damage’ book
– 3 Transexuals and a Lesbian heading up NYC Pride march
–Gay men are no longer hip enough for the gay pride parade
– Describes their unspoken hierarchy in a deliberately memorable way: trans > Gay > Cis > ‘Mormon.’
[Note: By adding that ‘cis are practically Mormon’ quip, he had the audience laughing, which lowered their guard          and opened the door to letting them implicitly accept his more significant point]

Then he lowered the boom. Clinicians can say words like ‘social contagion,’ and they are run out of town on a rial. But a comedian is free to point out the same point using more ordinary language. ‘It’s Trendy.’

– Every teen tries to shock and outrage the ‘squares who brought you up.’
– Doing things for the likes is more important than their own genitals
– Draws cultural differences between Los Angeles and Red State America
– Parents at an LA dinner party might talk about their respective ‘trans’ kids
– Is that same conversation likely to come up in Youngstown, Ohio?

The monologue continues on, but he drops his Big Idea here.

Either Ohio is shaming them, or California is creating them.

If we can’t admit that in certain enclaves, there is some level of trendiness to the idea of being anything other than straight then this is not a serious science-based discussion. It’s a blow being struck in the culture wars using children as cannon fodder.

I don’t understand parents who won’t let their kids walk to the corner without a helmet, an EpiPen and a GPS tracker… and God forbid their lips touch dairy.

But hormone blockers and genital surgery? Fine. (Talk about a nut allergy.)

He wraps up his monologue with another minute or two of musings that are well thought out and drive the point home.

Our culture rages against masculinity, mainly because they don’t understand it. If you want to see an example of how to live it out — to REALLY live it out — check out this deep dive into the life of the One Good Example humanity has to follow.