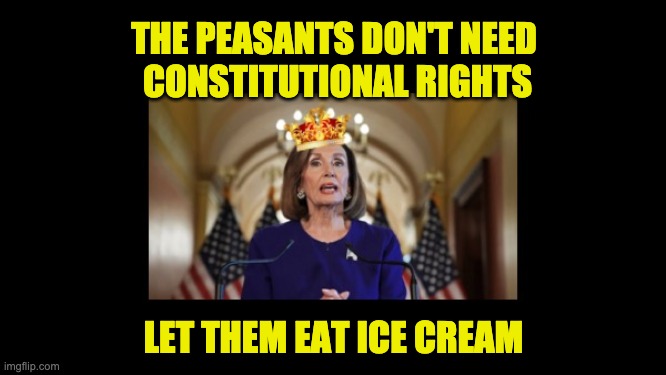 Pelosi used the Impeachment Hearings as an opportunity to drag Trump over the ‘grave threat’ he supposedly poses to the Constitution. But let’s compare Trump’s record since then against hers, shall we? Mad Queen Pelosi

Yes, the kneejerk reaction to the CCP Coronavirus was extreme. Shutting down the daily activities of America — and the world — was severe.  But it was not unique to America, nor even explicitly ordered by the President. Each State acted on the medical and safety warnings in their own way. Just like you might expect from a Federalist response.

Federal resources were offered to assist and augment local responses to the varying local needs. Trump used his ability to marshall resources to bring factories onboard in filling critical resource gaps — including PPE and respirators. But that was in addition to local efforts to meet local needs. He was even criticized for not being Top-Down enough.

He has explicitly defended the Constitutional rights of US citizens, even when ’emergency measures’ are used as justification for curtailing them. He has taken a particular interest in defending constitutional religious freedoms.

Now, how about Pelosi, that ‘great defender’ of Americans from the supposedly existential threat it faces from Orange Man Bad?

What has she been doing since she so famously recited that Pledge of Allegiance?

For a while, after the impeachment debacle, she simply turned tail and disappeared.

When she finally did come back, she told us Trump was failing to act.

She stalled the first big bailout package for days, demanding we let her stuff it full of partisan pork projects, including millions of dollars of bailouts to Universities and an Arts Center that have given pink slips to their own staff.

She has since gotten a few of her own flunkies together and crafted trillions of dollars worth of bills. They skip going to any committee. They avoid taking input from the hundreds of elected representatives. At least one of her trillion-dollar measures went directly to the floor, and when it did, no amendments were permitted, it was merely an up-or-down vote to something she dreamed up in private with a few of her closest friends.

How is that ‘representative government’?

And what were her priorities? Let’s focus on just one that tells a larger story. She wants the SALT deduction reinstated. Leaving aside the ‘tax breaks for the rich’ angle which most folks prefer to focus on with this issue, what is the SALT deduction, REALLY?

Simply put, if your local and state taxes are brutal, you get a break on your federal taxes. Sounds great, right?

Stop, for a moment, and think about what that means. If you are someone whose taxes are high in the first place, you are a big income earner. That means whatever numbers we’re talking about here are not the nickel and dime kind.

It also means that if you have a financially irresponsible local or state government, bleeding you dry on the tax side, that gives you an excuse to be a deadbeat at the federal level.

The consequence of this should be obvious. High-tax blue states don’t pay their ‘fair share’ federally because they are too busy propping up bloated and inefficient local and state governments.

This means that states who AREN’T bleeding their taxpayers dry end up paying a disproportionate amount of federal taxes, despite any whining we might hear from the Pelosis and Cuomos of the world.

The beauty of federalism is simple: If you don’t like how the local or state expression of the American experiment is working out, you can either change the system by voting directly or change your circumstances by voting with your feet.

This is borne out by the massive population migrations from heavily-taxed, and poorly-managed states to other states whose outlooks seem more promising. (Until the new arrivals poison their new communities with the same failed ideas, anyway.)

Pelosi is actively trying to strip that accountability feature out of the American experiment.

She — as one woman elected from a bulletproof blue region — is deigning to take upon herself sole authority that was designed to be split among what, 435 people! On what authority is she squeezing out the voices of hundreds of elected representatives?

And the House of Representatives is just PART of the Congressional whole!

Trump, being elected by the entire nation, is directly accountable to the whole country. On that basis, it is entirely proper that the executive should be bound up in a single individual.

Pelosi has no equivalent national accountability.

Does she claim the ability to create a multi-Trillion-dollar fiscal policy for which the entire nation will pay a heavy price, without anyone elected to speak for their regions having the slightest say in the matter? Under which article of the Constitution does she make such an assertion?

Pelosi has gone rogue and is officially unworthy of her office.

She has become Mad King George — in a dress.

If the American public still believes they deserve a government that puts representation in the hands of those being taxed, none of these clowns in DC is going to do that for you.

You will damned well have to demand it from them yourselves.

Are you up for it?

Or will, as Sam Adams suggested, ‘your chains set lightly upon you’…?