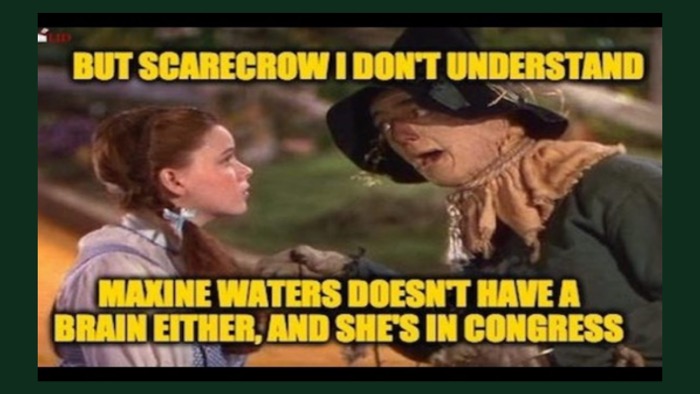 Pro-abortion liberals are fuming over the Supreme Court decision overturning Roe v.Wade. Among those weighing in was Mad Maxine Waters, the unhinged California Democrat who routinely incites violence.

Following the court’s decision, Waters advocated insurrection as she stood outside the Supreme Court building.

They’ve seen nothing yet.  Women are going to control their bodies no matter how they try to stop us.  To hell with the Supreme Court, we will defy them!

Radical-Leftist Maxine Waters says “to hell with the Supreme Court, we will defy them!”

No worries, Maxine, I don’t think anyone  wants to control your nasty body. Or even get near it. Ask Tempy below

So she is saying she will defy the law. It’s not like anyone wants to get her pregnant.

Planned Parenthood moved into our community with the abortion killing centers and said, ‘We’re here to help you. Let’s kill your baby, so you can have a better life.’ Well, killing our babies doesn’t give us a better life.

Have you looked at numbers beside the money you give your daughter every election? These are from 2019

Non-Hispanic Black women have a significantly higher abortion rate (23.8 per 1000 women of reproductive age) than that of Non-Hispanic Whites (6.6) and Hispanics (11.7). 38.4% of all reported abortions in the U.S. in 2019 were performed on Black women, however, only about 13.4% of the total population is Black.

Back to “we only obey laws we agree with”

After all, That’s how Democrats work.

This the left right now pic.twitter.com/Ux93sZZ160

This is the left pretty much all the time…

An insurrection? Is that James Brown? I thought he died?

If it’s an insurrection, will Nancy Pelosi form a committee with Democrats only? After all, she did it for January 6th, which wasn’t an insurrection.

This seems pretty… insurrectiony. Which is a regular practice for Mad Maxine.

Most of this post was first seen at  Conservative Firing Line