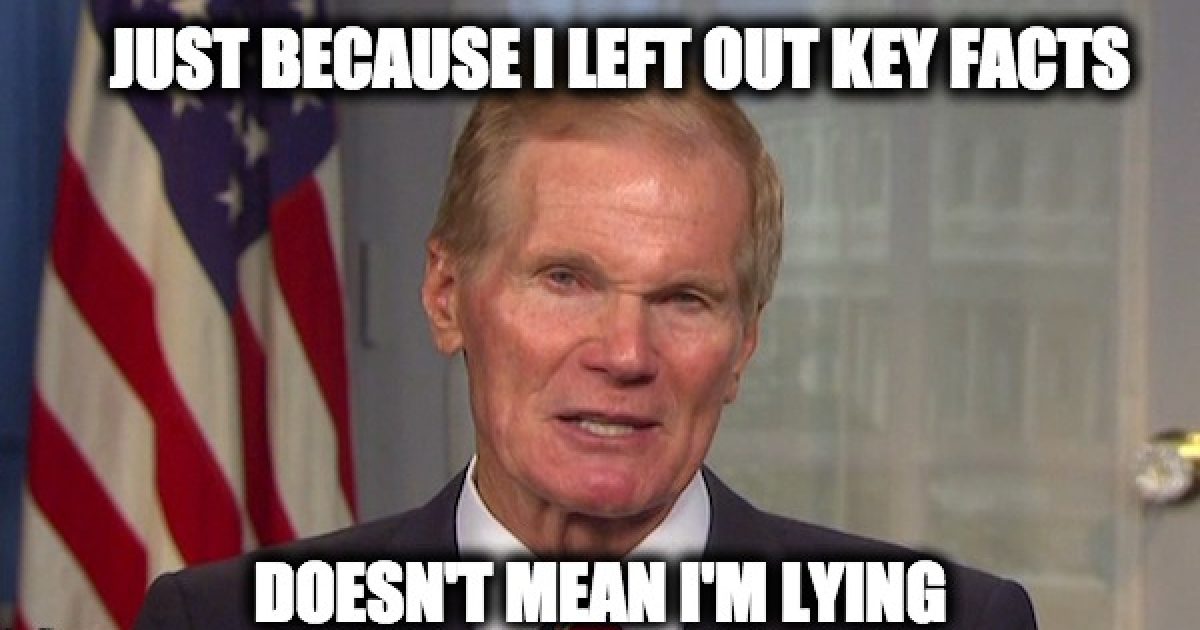 Wednesday before we even found out the scope of the massacre at a Parkland Florida High School, Senator Bill Nelson (D-Fl) was ripping his colleagues for the lack of gun legislation. Nelson was technically correct… but he was being totally dishonest at the same time.

Nelson spoke about the Senate’s inability to pass legislation preventing people on the terror watch list from owning guns but left out pertinent facts:

Oh, and do you remember a couple of years ago there was a proposal on the floor that if you’re on the terrorist watch list, you can’t buy a gun. That’s pretty common sense. We won’t let them get on an airplane because we don’t want them taking down a commercial airliner. But they don’t have a restriction of buying a gun.

Yes, it’s true a Democratic Party legislation to ban anyone on the watch list to own a gun was rejected by the Senate, but not because of the idea behind the legislation but because not everyone on the list deserves to be on the list.  But when a version of the same bill was presented by  Sen. John Cornyn (R-Tx)  that added a provision for people to receive due process, that would give the government 72 hours to prove that the person deserved to be on the list was rejected by the Democrats and only received 53 of the necessary 60 votes By the way, the NRA was a supporter of the Cornyn bill but Senator Nelson voted no!

“We all agree that terrorists should not be able to purchase a weapon; that is not up for debate,” Cornyn said before the vote. “The question before us is whether we’re going to do so in a way that’s constitutional.”

The various federal watch lists are a lousy way of screening people because so many innocents are placed on the lists. On the other hand, so many monsters such as the Nikolas Cruz the animal who killed 17 on Wednesday aren’t on the list.

In July 2014, liberal site Huffington Post explained the 7 ways people could incorrectly be put on the terrorist watch list. That list was based on a report by investigative site, The Intercept which published and reviewed the government’s watch list documents, the March 2013 Watchlisting Guidance ” which is a 166-page document issued  by the National Counterterrorism Center. The report spells out the government’s secret rules for putting individuals on its main terrorist database, as well as the no fly list and the selectee list, which triggers enhanced screening at airports and border crossings. The  guidelines allow individuals to be designated as representatives of terror organizations without any evidence they are actually connected to such organizations, and it gives a single White House official the unilateral authority to place entire “categories” of people the government is tracking onto the no fly and selectee lists. It broadens the authority of government officials to “nominate” people to the watch-lists based on what is vaguely described as “fragmentary information.” It also allows for dead people to be watchlisted  [I suppose they are trying to prevent zombies, vampires, and Democratic Party voters in Chicago from obtaining guns].

To be honest I don’t believe dead people should be able to purchase guns. However, I would imagine that there are probably other forces beyond the terror watch list preventing those sales.

The document’s definition of “terrorist” activity includes actions that fall far short of bombing or hijacking. In addition to expected crimes, such as assassination or hostage-taking, the guidelines also define destruction of government property and damaging computers used by financial institutions as activities meriting placement on a list. They also define as terrorism any act that is “dangerous” to property and intended to influence government policy through intimidation

This combination—a broad definition of what constitutes terrorism and a low threshold for designating someone a terrorist—opens the way to ensnaring innocent people in secret government dragnets. It can also be counterproductive. When resources are devoted to tracking people who are not genuine risks to national security, the actual threats get fewer resources—and might go unnoticed.

“If reasonable suspicion is the only standard you need to label somebody, then it’s a slippery slope we’re sliding down here because then you can label anybody anything,” says David Gomez, a former senior FBI special agent with experience running high-profile terrorism investigations. “Because you appear on a telephone list of somebody doesn’t make you a terrorist. That’s the kind of information that gets put in there.

Think about it for a moment. One could be put on the watch list because someone who knows a terrorist called you on the phone. Or if someone writes blog posts against administration policies it could be considered as intended to influence government policy through intimidation. It is even possible to be put on the watch list if you simply “piss off” someone at the White House (which based on what was done with the IRS, was probably a frequent practice of the Obama Administration).

By the way just because one is being investigated by the FBI for being reckless with national secrets doesn’t get you on the watch-list, so in all probability, Hillary Clinton can buy a gun.

Using the watch-list does not prevent a law-abiding citizen from being denied their 4th Amendment rights. The person putting a subject on the terrorist watch list doesn’t need any evidence, there is no due process for the person put on the list. In fact, one might not even know they are on a watch-list. The proposal described by Senator Nelson goes against two constitutional amendments.

A well regulated militia being necessary to the security of a free State, the right of the People to keep and bear arms shall not be infringed.

And the Fourth Amendment:

The vast majorities of both parties, indeed all Americans were just sick about the massacre of seventeen innocent people, mostly children at the Parkland Florida High School. It is bad enough that even before the bodies were cold, Senator Nelson used a tragedy in his state to score political points.  Even worse is he’s not being honest about the bill to ban people on the terror watch list from owning guns.