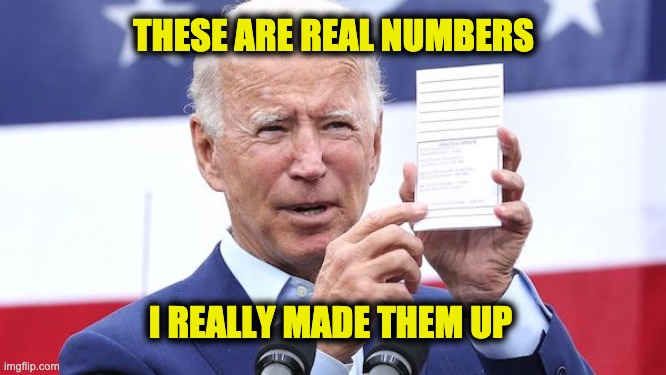 During a speech in Warren, Michigan on Wednesday, lying Joe Biden, the Democrat nominee for the White House, told yet another lie, falsely claiming that over 6,000 members of the U.S. military have died from the coronavirus. Lyin’ Joe Biden

He went on to reference the number of military COVID deaths and confirmed cases, but overstated them drastically.

Here’s a video of his blatant lie:

Biden shows a paper he carries every day listing U.S. military deaths and injuries in Iraq and Afghanistan, and the U.S. COVID-19 toll.

Fox reported that shortly after the event, Biden’s campaign quickly clarified that Biden had mixed up the numbers for Michigan with those from the military.

“Vice President Biden has the utmost respect for the men and women of the armed services and believes it’s the sacred duty of our country to properly equip them, look after their families when they’re deployed, and care for them when they return,” Biden’s Deputy Rapid Response Director Michael Gwin said in a statement to Fox News.

But wait a second! The sheet that Biden was reading detailed the number of military deaths–why would it have the number of deaths in Michigan? If it was his Michigan numbers, they were under-counted. The actual number is approaching 6,900.

I don’t know what’s worse — Biden’s lies themselves, or the fact that he deliberately and blatantly lies about things so easily fact-checked, knowing his stenographers, i.e., the lying propagandists in the lying liberal media, will never hold him accountable.