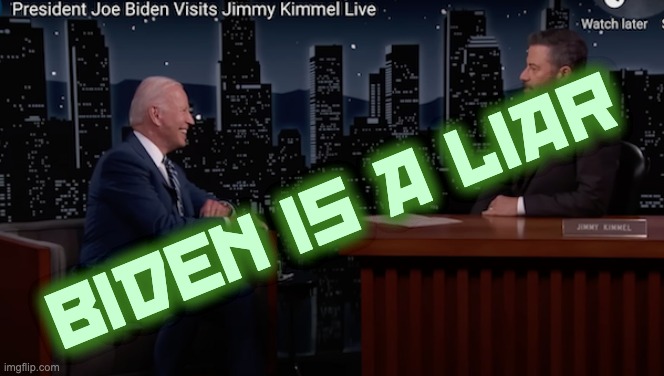 In his one and only interview for months, Joe Biden made the claim that the top 54 corporations didn’t pay a single penny in taxes, but this claim is certifiably false.

Joe Biden had not spoken to a journalist for 118 days — the longest stretch of any recent president — but instead of sitting for an interview with a serious journalist, Biden decided to sit down for a softball interview with a comedian on a late-night show.

Without much opposition from ABC’s Jimmy Kimmel, Biden spoke about the media and how hard it goes against him, guns, and violence, he blamed America for not being smart enough to understand how great he’s been as president, and he railed about taxes, among other things. While many of the things he said are arguably sketchy, his claim about taxes is probably false. Like just about everything else he says.

About 14 minutes into the interview, Biden claimed that corporations don’t pay “a penny in taxes.”

“The idea, there are 54 major corporations in America, made 40 billion dollars last year and don’t pay a penny in taxes, not a penny,” Biden told Kimmel.

“How many do you think the tax code is fair anywhere along the line here? No, I’m not being facetious now, I’m being deadly earnest. They don’t pay a penny,” Biden continued.

“So if we had a minimum tax of 15% … it doesn’t hurt them at all, they make a lot of money still, and we can raise a lot of money to make sure that childcare doesn’t cost you 1,400 bucks a month,” the president exclaimed.

This claim is verifiably false. Take Walmart, one of America’s largest corporations, for instance.

According to the website MacroTrends that tracks corporate taxes, Walmart paid $4.521 billions in taxes in 2022.

Indeed, MacroTrends has tax records like this for all the Forbes Fortune 500 companies.

One can argue that American corporations don’t pay enough taxes, or you can argue that they pay too much. But the reports are clear that they do pay taxes and this fact directly refutes Biden’s claim that they “don’t pay a penny in taxes.”

The interview caused eyebrows to raise in other ways, too. Biden’s media dryspell has shocked even the compliant, left-wing press.

Peter Baker, The New York Times’ chief White House correspondent, for instance, voiced his shock at the situation. “I can’t think of a parallel situation — it’s the fifth president I’ve covered and the first one I haven’t interviewed,” Baker told Politico. “They feel neither the obligation nor the opportunity.”

It all just shows how terrified Biden’s staff is about Biden talking to the press. Even with a compliant media landscape, they don’t want him in one-on-ones with the media.