Looking For Bellwethers For A 2022 Red Wave? Try The At-Large Congressional District In Delaware. 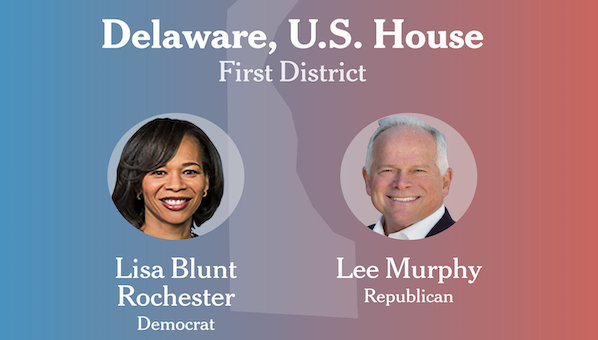 It’s Election Day in the U.S., and so that means there are once again 435 seats at stake in the U.S. House of Representatives and 34 out of 100 seats up in the U.S. Senate.

Based on the averages, Republicans should easily reclaim both the House, where Republicans need only six seats and the Senate, which is tied 50 to 50, with Vice President Kamala Harris as the tiebreaker.

So, how to tell what kind of night it will be? What are the bellwethers that could give an early indication of whether it is a typical midterm cycle in which the opposition party tends to pick up seats or an exceptional one where they don’t? No, not the ominous red lunar eclipse today.

Often, news agencies will throw out a handful of toss-up districts that tend to vote one way or another depending on the cycle, but in 2022, all of those have just been redistricted by state legislatures thanks to the 2020 Census.

Newly redrawn Congressional Districts have simply not been tested and so may not be a reliable indicator without extensive statistical modeling. Besides, it’s already Election Day. Who’s got time for that?

But what about those districts that never get redrawn? That is, the statewide, at-large Congressional Districts in states so small population-wise that they only get one representative and, therefore, cannot be redistricted.

Regardless of being a red state or a blue state, a safe seat or not, each of the at-large seats all have one thing in common: They obey the rules of the midterms. When a Democrat is in the White House, Democrats tend to underperform in the at-large Congressional Districts in blue states, and Republicans tend to overperform in red states, and vice versa.

It also works for presidential cycles. When a president is running for reelection, the incumbent party Congressman or woman in the at-large seat tends to overperform, and the opposition party representative tends to underperform in holding their own seat.

For example, in Delaware, President Joe Biden’s home state, in the at-large Congressional District, in 2018, the incumbent, Democratic U.S. Rep. Lisa Blunt Rochester, won easily with 64.5 percent of the vote. That was a midterm election that favored Democrats.

But in 2016, a presidential cycle that favored the GOP  as Democrats ran for a third term in the White House and Donald Trump won the Electoral College, Blunt Rochester only received 55.5 percent of the vote. Similarly, in 2020, with Trump running for reelection, Blunt Rochester only garnered 57.6 percent of the vote, the same year Republicans picked up 14 seats in the House.

Similar results for at-large Congressional District races from 2010 to 2020 in Alaska, North Dakota, South Dakota, Vermont, and Wyoming, with White House incumbent party candidates for Congress tending to underperform in midterms overperform in presidential reelection campaigns. The exact relationship and correlation also occur in statewide races such as gubernatorial contests, but Delaware will do just fine in this case.

If Delaware were to be used as a bellwether, one need only check Blunt Rochester’s showing against her opponent Republican Lee Murphy — her same opponent from 2020 — after polls close at 8 p.m. EST.

If Blunt Rochester is safely ahead with 63 percent to 65 percent of the vote, that would indicate a much higher than anticipated Democratic turnout, like in 2012 and 2018, and it could be an unexpectedly great night for Democrats.

On the other hand, if Blunt Rochester is only getting 55 percent to 58 percent of the vote — a late September poll had her up 50 percent to 33 percent — like in 2010, 2014, 2016, and 2020 when Democrats lost seats, or if she is barely winning or surprisingly even losing, it should be a perfect night for Republicans and appear as evidence of a national Red Wave taking place. As usual, stay tuned.