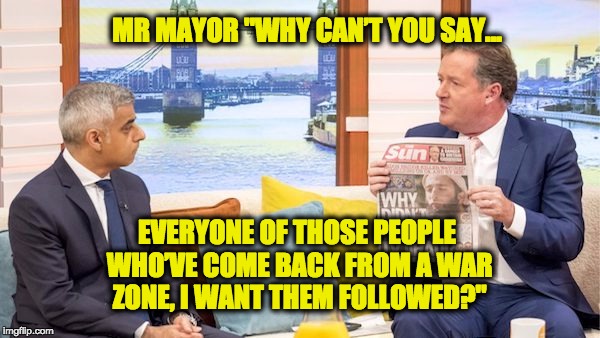 Piers Morgan is often arrogant, self-serving, and wrong. But in a recent dust-up with London’s mayor, Sadiq Khan, he was none of these things. In fact, in their recent conversation Morgan was right on target with his cutting attacks about the mayor’s lackluster attempts to defend the people of London from radical Islam.

Piers Morgan: “Where are the 400 jihadis still in London?… You’re the mayor! WHERE ARE THEY?”

Piers Morgan: Why not?… Why can’t you instruct the police, why can’t you… say everyone of those people who’ve come back from a war zone, I want them followed?

Sadiq Khan: The have to prioritize…

Piers Morgan: What could be a bigger priority than people coming back from a Syrian battlefield with the intent to harm British citizens? Why’s it not the number one priority? Why are these people allowed to just come back in in the first place and then the London mayor does not have a clue to where any of them are?

Where are the 400 jihadis still in London, @piersmorgan asks @MayorofLondon @SadiqKhan

Spot on, Piers. Spot on.

Khan won’t do anything about the 200+ Muslim terrorists who fought for ISIS in Syria and are now living, unmonitored and unmolested, in London. Why? Because in his eyes, they aren’t the problem. The problem is people like Donald Trump who say mean things about the terrorists. So what did Khan do after the London terror attack? He told Parliament to rescind permission for Trump’s state visit.

Think about that for a second. The mayor of London will fight to keep Trump out of England but he won’t fight to keep Muslim terrorists out. It’s the perfect picture of liberal policies in action, and it’s the EXACT reason that terrorism has become a major problem in Europe.