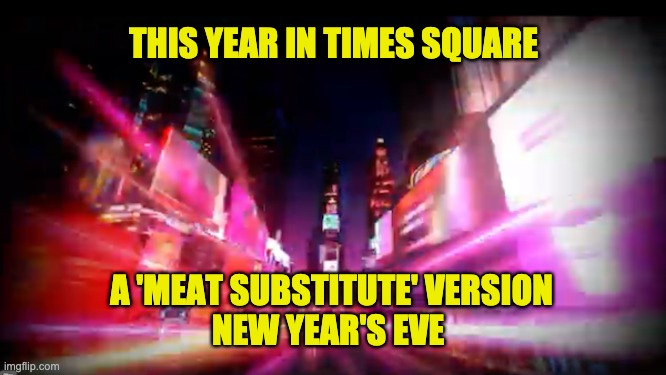 Just like every other part of 2020, this lousiest of years will be going out on New Year’s Eve with another turd thrown at us.

Every year the New Year’s Eve Ball descends atop One Times Square in front of an estimated one million people in person, live bands, celebrities, etc. This annual event creates enthusiasm about the new year to millions watching on television and over a billion watching throughout the world.

Because of the CoronaVirus, 2021 will be welcomed with an animation of the annual event. The teaser of the animation seems like a noble attempt, but the bottom line is that it looks more like the weekly opening of Monday Night Football (embedded below) than New Year’s Eve.

With their press release announcing the change, the Times Square Alliance promises:

“More than ever in these divided and fear-filled times, the world desperately needs to come together symbolically and virtually to celebrate the people and things we love and to look forward with a sense of renewal and new beginnings,” said Tim Tompkins, president of the Times Square Alliance, co-producer of the event with Countdown Entertainment, in a statement.

(…) One thing that will never change is the ticking of time and the arrival of a New Year at midnight on December 31st,” said Tim Tompkins, President of the Times Square Alliance, which co-produces the event with Countdown Entertainment. “But this year there will be significantly new and enhanced virtual, visual and digital offerings to complement whatever limited live entertainment or experiences – still in development — will take place in Times Square

In other words, just like the Thanksgiving Day Parade, the Metropolitan Opera, Broadway Theater, and the entire spring and summer, the real New Year’s Eve is canceled. In this case, it is to be replaced by what is (in my opinion) an inadequate substitute.

The scary part of the announcement was in the first paragraph describing “a virtually enhanced celebration that brings Times Square and the Ball to you digitally no matter where you are, scaled-back and socially-distanced live elements still to be determined, and an extremely limited group of in-person honorees, socially distanced, who will reflect the themes, challenges, and inspirations of 2020.”

Oh Great! “Reflect the themes, challenges, and inspirations of 2020.” That sounds like they are adding another way to ruin New Year’s Eve, politics!

While we are having drinks with a few friends and trying to forget how lousy 2020 has been, are they going to paint Times Square with “Black Lives Matter” like DeBlasio painted in front of Trump Tower, and the NBA did with the basketball courts?  Or “F**k Cuomo And DeBlasio” like someone painted on a Brooklyn street recently?

What about the “extremely limited group of in-person honorees?” Are they going to give their opinions on political issues that we don’t read to hear? Are they going to demand we de-fund the police? You know –the ones who will be protecting the celebrities that night. Will they be telling lies and crapping all over President Trump and conservatives like they do during awards shows?

Perhaps every commercial will be a social justice message, or like the NFL Draft show, when we were bombarded with constant commercials saying we are all in this together. No, we weren’t, and we aren’t. We are stuck in our houses with a limited amount of loved ones—No one is coming over to help us—certainly not Pelosi and the Dems in the House; they are blocking congressional help. Nor is Chuck Schumer helping as he blocked Sen. Tim Scott’s police reform bill.

In other words, based on their press release, just like the NBA, the NFL, the Emmys, Oscars, etc., this “meat substitute” version of New Year’s Eve may be a lecture about how we suck, that we are white supremacists, homophobes, misogynists, or other kinds of haters.

Just like almost everything else in 2020, New Year’s Eve 2021 sounds as if it will be a disappointment. The only bright spot will be that this annus horribilis will be over, and God willing, next year will be better.