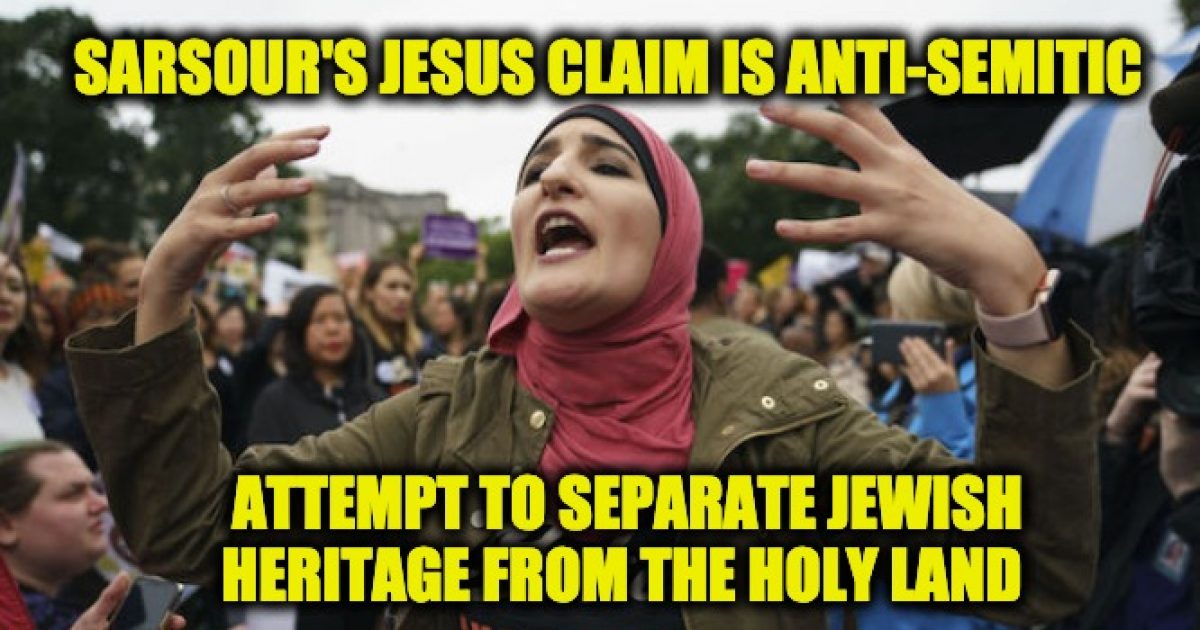 Initially presented by Yasser Arafat’s PR woman Hannan Ashrawiin 2001, the claim that Jesus Christ was a Palestinian has been back in the news lately thanks to Kirsten Gillibrand’s anti-Semitic, anti-American friend Linda Sarsour.

Jesus was Palestinian of Nazareth and is described in the Quran as being brown copper skinned with wooly hair.

Folks reported my tweet that Jesus was a Palestinian. ? twitter was obviously like this doesn’t violate our standards. It’s also true. Jesus was born in Bethlehem which is in Palestine. Move on.

Sarsour’s claim is historically impossible and is anti-Semitic attempt to delegitimize Israel by erasing the historical connections between the Jewish people and the holy land.

Being Jewish and living around 2,000 years after Jesus’ death, I can’t speak to what Jesus taught or the color of his skin. But considering when and where he lived Sarsour’s description of Jesus’ physical appearance is probably correct. In fact, scientists who have looked into it believe that Jesus looked like a typical Middle Eastern Judean, as opposed to the way he is generally portrayed as a European. (Yes, Judean. The country was called Judea, that’s where the term “Jews” comes from). As for the wooly hair, well–that’s where the “Jewfro” came from.

As for the Palestinian claim. Sarsour was about a century too early. Jesus was crucified somewhere around 33-35 CE, one geologist claims the date was April 3 in the year 33. The Roman’s didn’t change the name of the holy land from Judea to Syria Palestina until the year 135.

The name of the country Judea came from the tribe of Judah (Jacobs third-son), which was the largest of the twelve tribes and lived in the land that encompassed most of the country of Judea. After the Bar Kochba revolt in 135 CE, the Romans punished the Judeans (Jews) for revolting for the second time in sixty years. To poke those rebellious Judeans in the eye, the Romans changed the name of their country from Judea to Syria Palaestina. The new name came from the ancient enemy of the Jews, the Philistines who had migrated to the Middle East from Europe around 1,200 BCE, they disappeared around 600 BCE, therefore by the time the Romans changed Judea’s name the Philistines were gone for over seven centuries.

The Romans also threw out many of the Judeans creating the Jewish exile that lasted till 1948. Eventually, the exiled Judeans morphed their name to Jews. Putting the timeline together, it is clear to anyone with basic math skills (or a calculator), that it is impossible for Jesus to have been a Palestinian. There was no piece of land called Palestine until 100 years after Jesus died, and the area wasn’t controlled by Muslims until 600 years after his death.

The Byzantine Empire took control of Judea around the year 330 C.E., and three centuries later, it was conquered by the Muslim Califate Empire. They were followed by the Christian Crusaders and the Ottoman Empire before it was handed to the British after the first world war. At no time after the Roman put down the revolt of the Judeans in 135 CE, was the Holy Land a separate Palestinian state. It was always a vassal of a larger empire.

If Jesus was a Palestinian, Christians couldn’t claim that he was from the line of King David, one of the Jewish Messiah requirements.

Linda Sarsour’s claim that Jesus is a Palestinian is an attempt at trying to create a new history for the Palestinians. If they can convince people of the falsehood that Palestinians were around for two millennia, then the lie that Jews are occupying Palestinian land becomes almost logical.

Anyone who says that Jesus was a Palestinian hasn’t the slightest idea of history and/or is trying to delegitimize the 3.500+ year Jewish heritage in the holy land. Both Jews and Christians believe that Jesus was a nice Judean (Jewish) boy who went into his father’s business. The real disagreement between the two faiths is his father’s occupation.

But there is no dispute between Jews and Christians that Jesus grew up in Judea, and according to the second chapter of the book of Luke was circumcised when he was eight day’s old as dictated by Jewish law.