@MrMikeBlake Feel Free To Come After Me, Linda Sarsour Hates Jews & America- I’m Not Backing Off 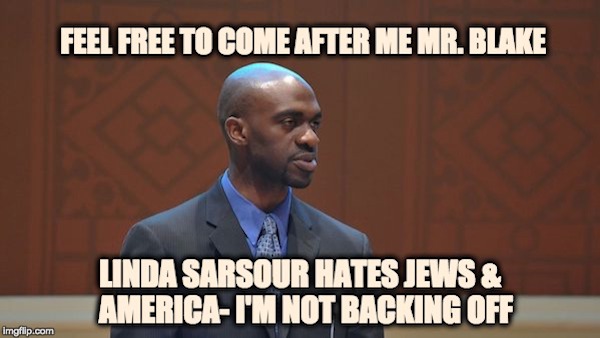 On Saturday, Michael Blake, vice-chairman of the Democrat Party, issued a threatening tweet against those who “keep coming” after America basher and anti-Semite Linda Sarsour who is scheduled to give the commencement speech at CUNY. He warned that “we’re going to respond directly, consistently, with all heart & soul.”

Making it real clear. If you keep coming after @lsarsour, we’re going to respond directly, consistently, with all heart & soul.
Fall back!

Sarsour is an anti-Semite, and she constantly trashes the United States, she deserves to be “come after.” Maybe it’s part of the Democratic Party’s hatred of Jews.

Much of modern Antisemitism is different from the traditional Jew-hatred, it is disguised as anti-Zionism, and claimed to be simply criticism of Israel.  In 2009 while Barack Obama was president, the US State Department defined Antisemitism the list is long but one of the items includes, denying the Jewish people their right to self-determination, and denying Israel the right to exist [also known as Zionism]

She should tell that to my friend Dr. Phyllis Chesler who is not only a Zionist, but an internationally recognized leader of the feminist movement.

The hate-monger Sarsour doesn’t expend all of her venom on Jews.

Linda Sarsour also posted two links on her Twitter feed to a rabidly anti-Israel video by a New York poet that accuses Israel of ethnic cleansing and mocks interfaith dialogue as selling out.

Sarsour has been invited to at least seven White House meetings since April 2010, records show. All but one were with Paul Monteiro, associate director of the White House Office of Public Engagement. The most recent meeting took place seven months ago. Last week, the Investigative Project on Terrorism reported on hundreds of White House meetings involving radical Islamists like Sarsour.

Michael Blake, vice-chairman of the Democrat Party says “we’re going to respond directly, consistently, with all heart & soul” those of us who don’t back off Ms. Sarsour.   If he objects to the peaceful protest against Linda Sarsour, those of us who are simply pointing out her anti-Semitism and her slandering of America, why didn’t he object to the threatened violent protests against Ann Coulter at Berkley? Why didn’t he object to the burning of the Israeli flag at the DNC convention, or the venom directed toward President Trump during the recent Women’s protest?

Maybe it’s part of the Democratic Party’s trend of not being friendly toward Jews.  After all they just made anti-Semitic, anti-Israel friend of the Muslim Brotherhood Keith Ellison the number two person in their party. And Senator Gillibrand (D-NY) who went against the wishes of her voters and helped to pass the Iran Deal which doesn’t stop Iran from building nuclear weapons and attacking the Jewish State, wrote a glowing endorsement of Sarsour in a recent issue of Time Magazine.

See Mr. Vice-Chairman Mike Blake, Linda Sarsour slanders America the country that has given my family a home since they fled to this country over a century ago. She slanders the law enforcement people who protect my family every day, and the Jewish people of which I am a very proud member.

I will continue to go after her.  If you want to go after me directly as your tweet says…send me a tweet–we can set up a meeting.