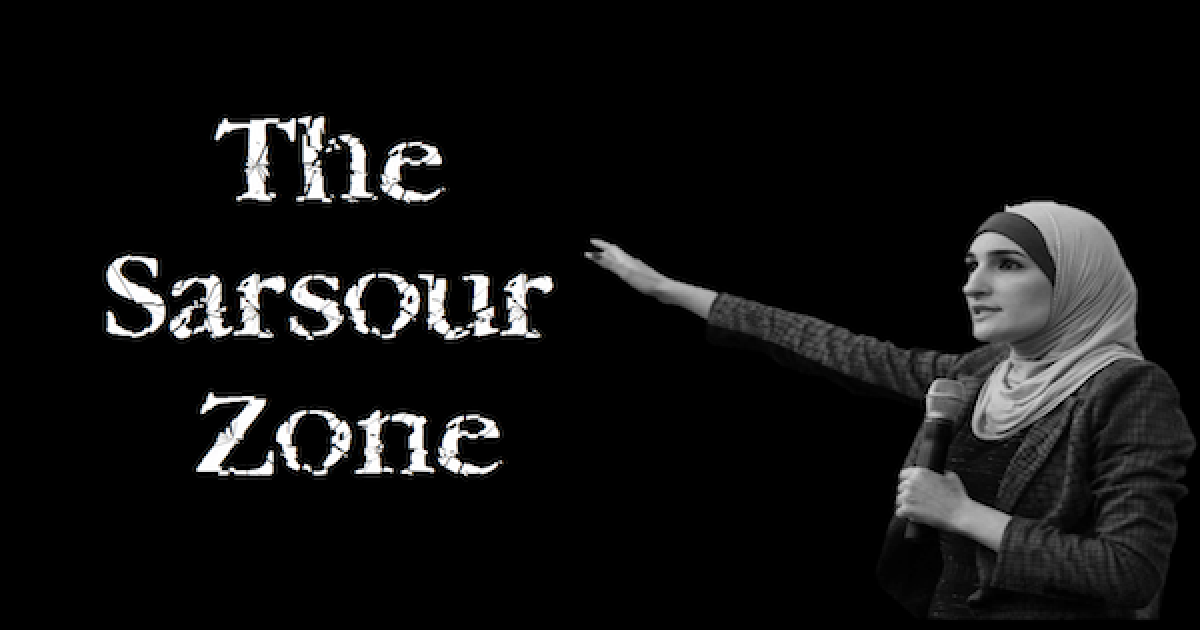 There is a fifth dimension beyond that which is known to man. It is a dimension as vast as space and as timeless as infinity. It is the middle ground between light and shadow, between science and superstition, and it lies between the pit of man’s fears and the summit of his knowledge. It is a dimension where a school hosts a conference on Antisemitism and invites an anti-Semite to speak. That’s the signpost up ahead — your next stop, the Linda Sarsour Zone

This is beyond crazy. The fact that the New School invited an anti-Semite like Linda Sarsour to speak at an event entitled “Anti-Semitism and the Struggle for Justice” is crazy enough, but the fact that she used the opportunity to spew an anti-Semitic stereotype, pushes it into the Twilight Zone.

During her words at the event, Sarsour used the anti-Semitic canard about Jews controlling the media

Sarsour also claimed that “the existential threat (to the Jewish community) resides in the White House, in the highest offices of these lands.” She also claimed that Americans currently live “under fascism” and defended her participation in the boycott, divest, sanction movement, which seeks to economically sanction and isolate the Jewish state.

If the Jews really controlled the media she would never receive coverage, nor would her protector in the Senate, Kirsten Gillibrand (D-NY), or her other fans such as NY Governor Cuomo, or the liberal anti-Trump women who have been running protests such as The Day Without Women. Heck if the Jews controlled the media I would be a regular contributor to a cable news network.

Minister Farrakhan who Sarsour mentioned also being slandered by the Jewish-controlled media, has been inciting hatred against Jews for decades. And no one has damaged him more than his own words. Perhaps the nicest thing he ever said about the Jews was Judaism is a gutter religion. But there are many other examples like his 2015 Saviours day speech when he claimed the Jews were responsible for 9/11

It is now becoming apparent that there were many Israelis and Zionist Jews in key roles in the 9/11 attacks.  Israelis had foreknowledge of the attacks…  We know that many Jews received a text message not to come to work on September 11”

In another speech, Farrakhan crawled out from under a rock to claim that today’s Jews are fake. They are not the Children of Israel, American Blacks are, Jews just use their monetary power to keep the black man down.

But it was natural for Sarsour to blame the Jewish Media for slandering Farrakhan, she thinks just like him. Sarsour is an anti-Semite, and she constantly trashes the United States.

Much of modern Antisemitism is different from the traditional Jew-hatred, it is disguised as anti-Zionism, and claimed to be simply criticism of Israel.  In 2009 while Barack Obama was president, the US State Department defined Antisemitism the list is long but one of the items includes, denying the Jewish people their right to self-determination, and denying Israel the right to exist [also known as Zionism]

She should tell that to my friend Dr. Phyllis Chesler who is not only a Zionist but an internationally recognized leader of the feminist movement.

The hate-monger Sarsour doesn’t expend all of her venom on Jews:

Linda Sarsour also posted two links on her Twitter feed to a rabidly anti-Israel video by a New York poet that accuses Israel of ethnic cleansing and mocks interfaith dialogue as selling out.

Sarsour has been invited to at least seven White House meetings since April 2010, records show. All but one were with Paul Monteiro, associate director of the White House Office of Public Engagement. The most recent meeting took place seven months ago. Last week, the Investigative Project on Terrorism reported on hundreds of White House meetings involving radical Islamists like Sarsour.

Perhaps the reason the New School invited Linda Sarsour to speak at this conference was just to show her as a prime example of an anti-Semite—if that’s not the case, we really are in another dimension.