Blogiversary: Lidblog is Thirteen ‘Today I Am A Blog’ 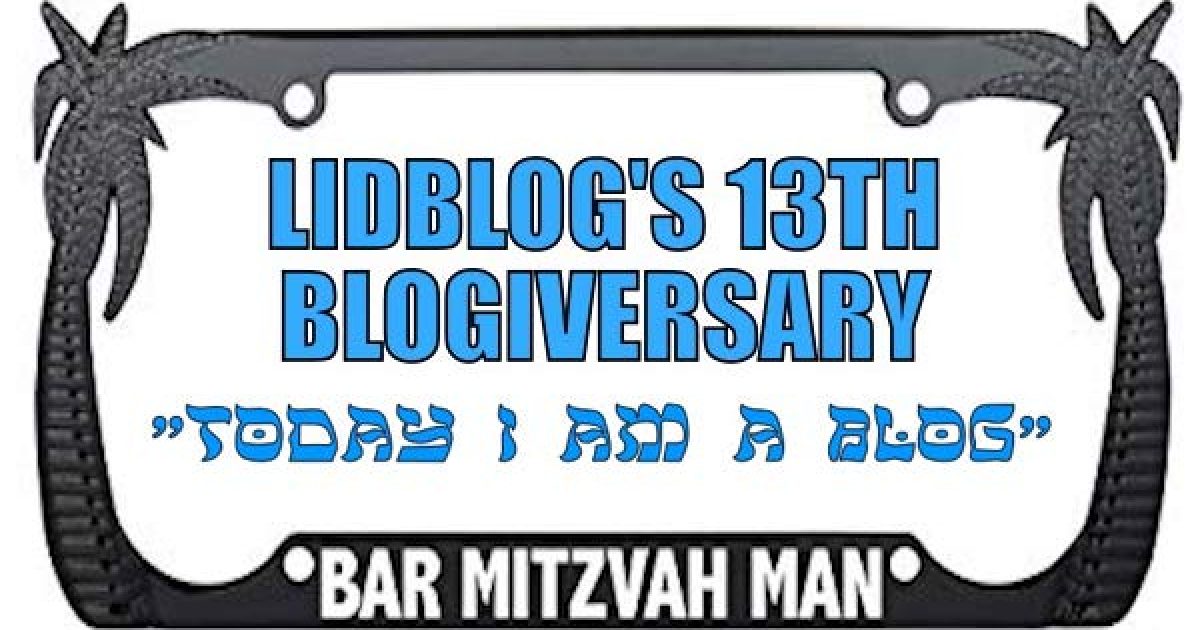 My “writing career” began in May 2004 with my first contribution to AISH.com. I soon became a regular at AISH and Jewish World Review but became frustrated because the former wouldn’t allow me to be political and the latter would take much too long to review my submissions (a post I submitted in October 2005 is still waiting to be posted).

In 2005 the site was called Yid With Lid. But eventually, I discovered  Yidwithlid said to potential readers that only Jewish articles were posted here and this was really a political blog. Well, that and Daniel Pipes drilled me a new one, saying the title was pejorative and an indication the prose wasn’t serious. I didn’t mean to be derogatory (and sometimes my posts are snarky even when they are serious).

Back then the blog looked like this, and I was hosted by Google’s Blogspot. In 2006 a good day saw 75 readers, today that is about ten minutes (not including the RSS Feeds, Facebook and the mailing list). Now a good day can be 1-200 times that thanks to you the readers.

This is the 16,045th post since that first day (there’s no way to report total traffic as I didn’t start keeping records till the site was about a year old and with the switch, over in 2015 the earlier records were rendered obsolete.

If this blog had a real Bar Mitzvah it would be reading the Torah portion of Yitro, named after Moses’ father-in-law, but it is significant for three reasons, this is the part of the Torah where we first hear the Ten Commandments (or as it’s called in Hebrew, the Ten Words). It is also important because, at the beginning of this section of the Torah, Yitro tells Moses that it is important to delegate and spend more time with his wife and kids. The obvious lesson is that family comes first. The final thing in this section is that Yitro is one of four different names Moses’ father-in-law is called in the book of Exodus ( Yitro, Yithro, Yisroi, Yisrau, and Yisro). From this, we learn never to cash a check issued by Moses’ father-in-law.

I’ve made some enemies in the past few years, usually by defending others or outing politicians.

More important though is the long list of close friendships with people I’ve met only through the efforts of building this site. There are too many to name here.  So many others have invested the time to teach me so much, that includes you the readers who have taken the time to write letters and comments.

Whether this is your first time to this site or whether it is your  16,045th time, it is impossible to express my appreciation for the fact that you have taken a part of your busy day to read what is written here.

Okay enough reminiscing, it’s time to put the sappy stuff aside and write some real posts.