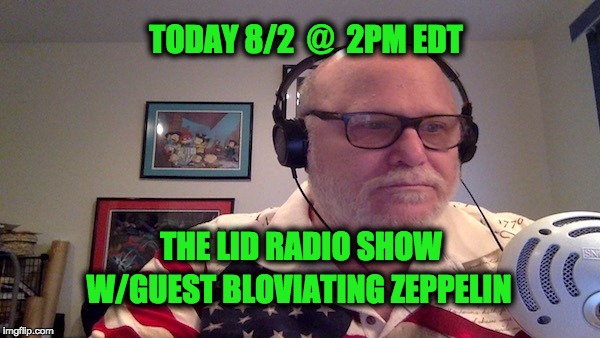 This week’s Lid Radio Show guest is BZ, the Editor/Publisher of the great website Bloviating Zeppelin  Host of the show on SHR Radio:  BZ’s Berserk Bobcat Saloon, which can be heard on the SHRMedia and High Plains Talk Radio networks every Tuesday and Thursday Nights @11pm Eastern.

BZ is a true conservative, he believes in God, the strength of America, the brilliance of our Founding Fathers, the valor of our military, and the need for Leadership in all forms and on every level. He doesn’t believe censorship as he believes everyone on the Far Left has a God-given right to be painfully stupid — and he has the right to expose that stupidity.

The Zep and I have plenty of left-wing stupidity to discuss, between the MSM’s over-reaction just about everything the president says or does, the left’s continued reluctance to accept that Trump won the election fair and square,  the unmasking investigation looking at Ben Rhodes (the Obama guy who sold through the Iran deal), the failure of the Obamacare repeal/replace vote, the Calexit movement, the fact that Chuck Schumer still hasn’t learned how to wear glasses, and of course anything big that comes up before the show