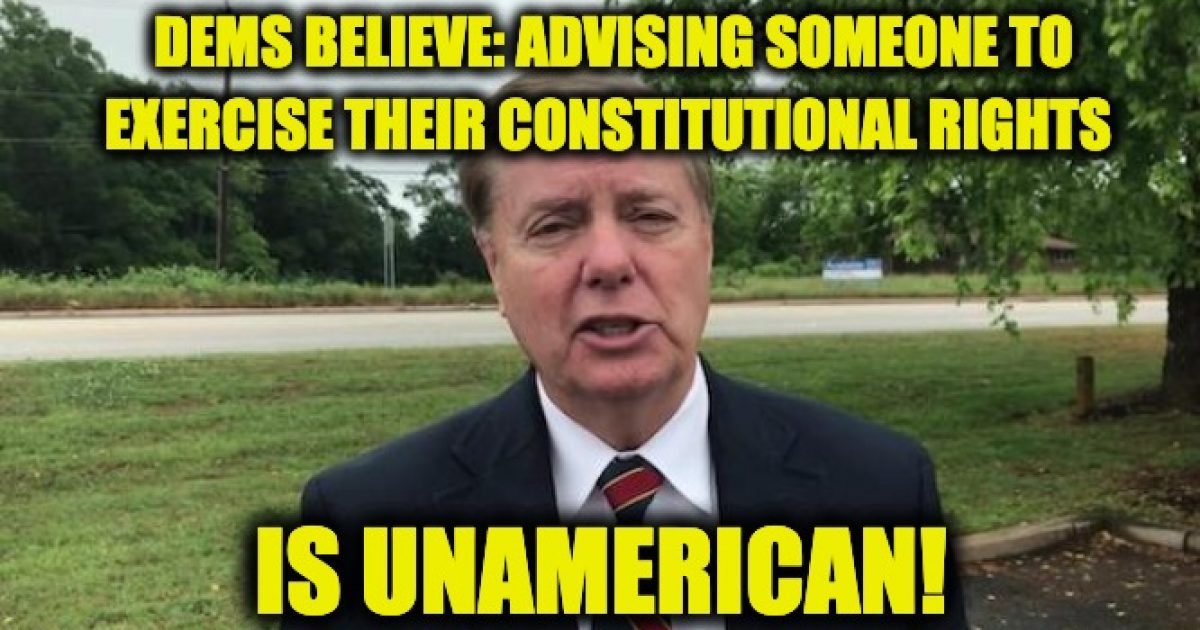 How Dare he tell Donald Trump Jr. to exercise his constitutional rights! Even though he has already testified for over 27 hours to various congressional committees, and the special prosecutor reported the Trump campaign, in fact, NO American colluded with the Russians (Trump Jr. is an American), the Senate intelligence committee subpoenaed the President’s son to talk about the non-existent collision. On Monday Lindsey Graham, the Senate Judiciary Committee chairman urged Donald Trump Jr. to show up but take the  5th when he’s forced to answer questions from Intelligence Committee. On Tuesday the liberal twitter world is accusing Graham of treason, and a cover-up and telling the Senator to resign.

Apparently, the committee wants to ask Trump Jr about the Moscow trump tower deal. The scuttlebutt is that the testimony of the President’s son differs from that of the president’s former personal attorney Michael Cohen. The committee wants to decide who was lying, Donald Trump Jr. or the guy whose address is now the federal prison in Otisville, New York, where he is serving a three-year sentence after he pleaded guilty to lying to Congress. One doesn’t have to be a Trump supporter to know that hearings are not needed to determine who was being truthful!

Graham’s suggestion made sense, it offered a way for the entire Russia hoax to be finally over in the Senate, “You just show up and plead the Fifth, and it’s over with.” It also protects him from the queen of mean, Kamala Harris from going crazy on him to score points with the base she is trying to attract to vote for her in the Democratic primaries.

Democrats went crazy on Twitter. They really hate it when people butt in and try to ruin their public lynching of anyone named Trump.

For example, the Democratic Coalition called Graham a traitor and told him to resign.  The Democrats don’t recognize the Constitution; therefore it is understandable that they would call a recommendation for someone to exercise their constitutional rights evil and traitorous.

Lindsey Graham should resign. Retweet if you agree. #LindseyGrahamResign

How soon they forget. John McCain’s just passed, and they called his lapdog President Trump’s lapdog.

Yes he should resign. Blackmail may explain his actions

Perhaps he just wanted to make sure the President didn’t announce his cell phone number. But I doubt it. Ever since Graham got out from under the influence of the late John McCain, Lindsey Graham has acted almost—well—like a conservative.

This brings back an old saying my friend Tommy used to say. “If it smells like crap it’s crap.” #LindseyGrahamResign Graham encourages Donald Trump Jr. to plead the 5th https://t.co/fpJ0sB3DiM

By telling Donald Trump Jr. to ignore a subpoena, the senator is violating his oath of office, defying our Constitution and further aligning with a man hellbent on authoritarian rule. #LindseyGrahamResign

Hey Michelangelo PAY ATTENTION! Graham didn’t tell Trump Jr, to ignore the subpoena, he told him to show up and take the fifth.  I award you no points, and may God have mercy on your soul.

Graham should be investigated!

Sorry Jeff but the Democrats don’t have time to investigate Graham. They are too busy investigating Donald Trump for everything he ever said and everything he ever did. They even want an investigation into every time he pooped in his diaper when he was an infant. But I do want to thank you for being the bottom of the intelligence curve for people named Jeffrey.

This next comment confused Lindsey Graham with Geraldo Rivera:

Lindsey Graham is slow,? lacks moral fortitude and appears to act like he’s one of Trump’s girlfriends. I heard that Trump & Lindsey spoon & watch Fox & Friends together. That’s why he gets elected. Welcome to the Deep South. #LindseyGrahamResign. pic.twitter.com/Tlsaberpm0

There are more, but after that last one, my eyes hurt.

UPDATE From FNC Donald Trump Jr. has reached an eleventh-hour agreement to testify before the Republican-led Senate Intelligence Committee, most likely in June, Fox News has learned. Ultimately, the panel agreed to limit questioning to 1 to 2 hours, with narrow room for follow-ups, Fox News has learned. A source familiar with the discussions told Fox News the panel never would agree to limit topics.

It still doesn’t diminish the stupidy of the Liberals who attacked Graham.