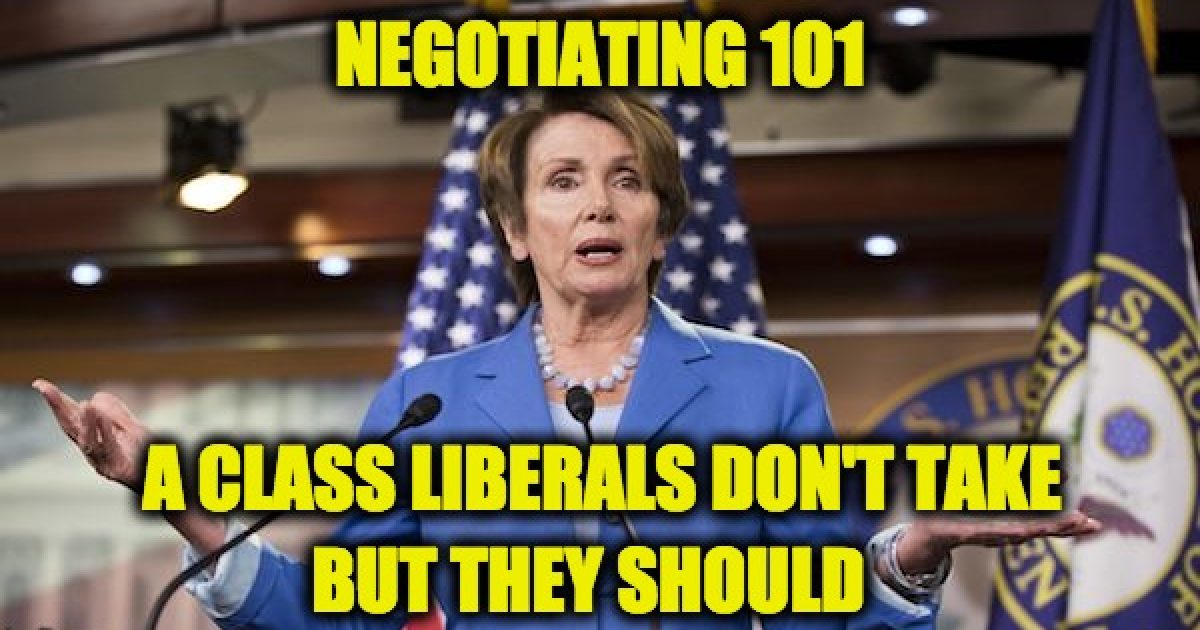 On Thursday President Trump “walked away” from the June 12th summit with North Korean despot Kim Jung Un. As they usually do whenever this president makes a decision the liberals went berserk.  The same people who six-months-ago warned that President Trump was going to get us into a nuclear war with North Korea, then cautioned that President Trump was going to give too much to Kim Jung Un a week ago, are now saying by walking away Trump made the U.S. look weak. That’s because liberals do not know the first thing about negotiation tactics.

Isn’t there one liberal who has ever negotiated for a living?  Is there one Trump-hating member of the mainstream media who remembers how we got a lousy deal with Iran?  Every time Iran said jump, not only did Barack Obama and John Kerry jump, but they kissed Iranians’ posteriors on the way up and again on the way down.

For thirty years before entering the blogging business, my negotiation skills were honed in the advertising media world.  Being able to negotiate favorable rates had a direct effect on one’s income and employment status.  One of the first things taught about a tough negotiation always force your opponent into a position where they need the deal more than you do. Sometimes that requires walking away from the table. That’s precisely what President Trump did today, it’s what Obama and Kerry should have done and didn’t.

And using another negotiation tactic, President Trump walked away from the summit diplomatically without insulting North Korean despot with a lousy haircut. This was a signal to the only chubby person in North Korea where food is sometimes scarce, that the negotiations could still happen, but only on American terms.

House Minority leader Nancy Pelosi, who knows almost as much about negotiations as she knows about the value of a $1,000 bonus to a middle-class family, attempted to taunt the POTUS with:

“When he got this letter from the president saying ‘OK, never mind’ — he must be having a giggle fit right there in North Korea.”

Kim was not having a giggle fit, more likely he was having a sh*t fit.  It was the tiny but tubby tyrant who needed the meeting and wanted a deal. That’s why he requested the confab and followed up with goodwill measures such as releasing his three American prisoners and blowing up one of his nuclear test sites.

Sure he was testing the Americans, but Kim Jung Un miscalculated, he didn’t think Trump would walk away–Americans don’t do that. How does he tell his generals that he gave away some of his leverage and without getting some of the aid he needs for the collapsing North Korean economy? He got played.

For those who say that by agreeing to the deal in the first place President Trump just had a foreign policy disaster, I urge you to take a negotiation class, because you will learn that thanks to President Trump walking away, the United States is in a stronger negotiating position than we were a week ago.

According to the report, Pyongyang indicated it was still prepared to go ahead with talks and solve matters of concern “whenever, however” with the United States.

“Kim Jong Un has made utmost efforts to hold a summit with U.S. President Donald Trump,” said KCNA, as quoted by the Reuters news agency.

The country was “still willing to resolve issues with the United States whenever, however”, it added.

Trump’s “decision to scrap U.S.-North Korea summit is not in line with the world’s wishes”, said the North Korean news agency.