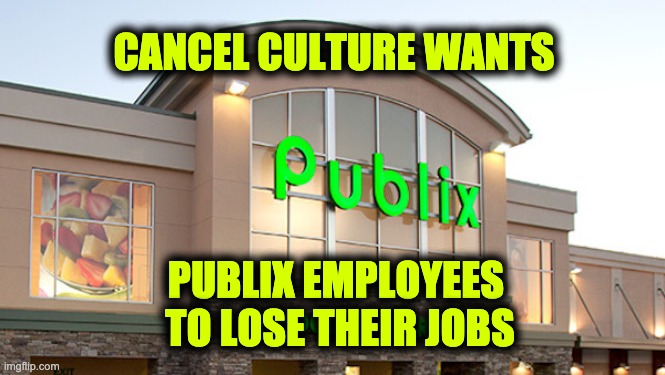 The liberal cancel culture is at it again. This week, one of the south’s most popular grocers Publix is coming under fire because an heiress to the chain’s founder who is not involved with the business made a hefty donation to the Trump rally that preceded the January 6 break-in of the US Capitol. liberals grocery chain boycott.

Southern grocery store chain Publix is on the defensive against boycott demands from shoppers who are angered that an heiress to the Florida-based business reportedly donated $300,000 to the January 6 rally in Washington, D.C. that occurred before the deadly Capitol riot.

Publix attempted to put distance between the company and Julie Jenkins Fancelli, a Donald Trump mega-donor who is one of late founder George W. Jenkins’ seven children. The company aimed to get out in front of the controversy by announcing the heiress is “not an employee” and is “neither involved in our business operations nor does she represent the company in any way.” The donation blowback prompted wider criticism of corporate money in politics and reminded business owners of the power behind social media-inspired boycott movements.

Publix also described the Capitol attacks as a “national tragedy,” before declining to comment further on Fancelli’s reported donation to organizers she made with the help of right-wing conspiracy theorist Alex Jones.

Organizers of the boycott were using #BOYCOTTPUBLIX to spread the word on social media.

Ms. Fancelli has nothing to do with Publix. Even more important is the fact that their boycott, if successful won’t hurt the already rich Julie Jenkins Fancelli. Instead, it will hurt the regular people who work at the grocery chain: the people who stock the shelves, run the cash registers, bag the groceries, etc. Those grocery workers who despite COVID worked at Publix to help feed America.

In the end, it’s a typical cancel culture hissy fit, with no thought to the unintended consequences, such as sending Publix employees to the unemployment line.